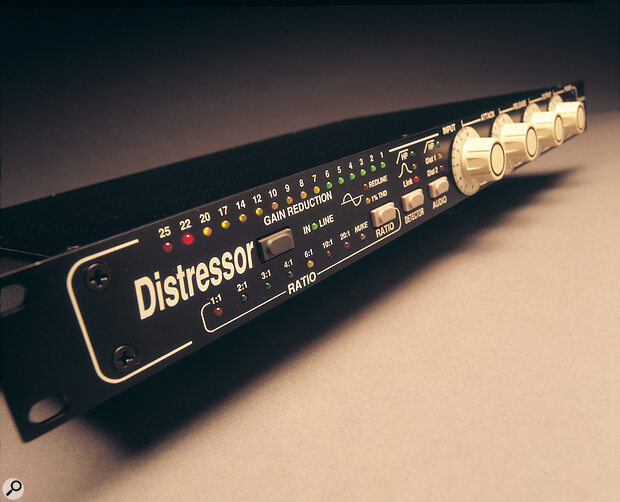 Can new technology really emulate vintage equipment, or do you have to use vintage parts? Paul White tests a modern compressor that claims chameleon‑like abilities to emulate classic compression sounds.

At one time, it seemed as though all the black arts of audio design were focused on digital reverb algorithms, but in the latter half of the '90s, most of the mystique appears to have shifted over to compressors. Nowadays, those vintage compressors, often cooked up by hand in the early days of recording, are valued more than the latest models that, ostensibly, have benefited from over two decades of design experience and high‑spec modern components. Even those building modern compressors seem to be aiming for a version of the old sound. One such compressor is the USA‑designed Distressor, a VCA soft‑knee compressor with a few unusual twists, including tube and tape distortion emulation. The signal path is pure analogue, but much of the control circuitry is digital.

Because the Distressor features so many user‑adjustable options, the designers have dispensed with conventional switching in order to save panel space. Instead, they've used a very simple set of buttons which allows you to cycle around the various options by repeatedly pressing the appropriate button until you get what you want. Each option is clearly indicated by an LED, so you always know exactly where you are. Digital control circuitry is used to manage the switching, and a gold capacitor can keep the on‑board memory going for up to a month to store your last‑used switch settings. For indefinite storage, two batteries can be fitted inside the case.

The Distressor is a single‑channel compressor packaged in a 1U‑high box, with rear‑panel sockets and a front‑panel switch setting for stereo linking, should this be required. Audio connection is via both balanced XLRs and unbalanced jacks, but there's no separate side‑chain input. Instead of a threshold control, the unit has a set internal threshold and a variable input‑gain control, so turning up the gain increases the amount of your signal that rises above the threshold, and thus the amount of compression which will be applied. A 16‑LED gain‑reduction meter shows by exactly how much you're reducing your signal peaks. Manual controls are also fitted for Attack, Release and Output, and all four knobs are suitably large and dated‑looking, with interesting calibration marks around the edge. You'll notice that there's no ratio control, and that's because the ratios are switchable in steps rather than being fully variable. There are seven ratios, from 1:1 to 20:1, with a further setting simply called Nuke — a brick‑wall limiter. The reason for including a 1:1 setting is so that you can still use the distortion facilities when you don't need compression. Pressing the Ratio button steps through the available settings, each of which has its own status LED. Nuke gets a blue LED, just to be cool! Bypass is a separate, dedicated button and operates a hard relay bypass, routing the input signal directly to the output connectors.

Distortion mode 2 adds predominantly second‑harmonic distortion, in relatively small amounts (around 3%), to produce what we generally describe as warmth; the process is analogous to what you'd expect from an overdriven class‑A valve stage. Dist 3 aims to add third‑harmonic distortion to produce the kind of symmetrical distortion you hear when tape (or a class‑B amp stage) is driven into saturation. A couple of warning LEDs come on at 0.25% THD and 3% THD or more, to help in setting up, and the amount of distortion is determined by how much compression is being used, and by the attack setting of the compressor.

If you believe only tube technology can deliver the true classic sound, a few minutes spent using the Distressor might cause you to rethink your positon.

The settings of the Distressor's Detector Modes, as the name suggests, affect how the side‑chain responds to programme material. In addition to feeding the signal flat (unchanged) to the side‑chain, it's possible to put in a high‑pass filter, to prevent low frequencies from modulating the high end, and also to patch in a 6kHz band‑emphasis filter, a less common option. This makes the compressor react more strongly to frequencies in the 6kHz area of the spectrum, and can help take the edge off aggressive guitar parts or other problem sounds, as well as reducing sibilance. As the filter is in the side‑chain, no EQ is applied to the processed signal — only gain reduction. Pressing the Detector Mode button repeatedly allows you to step around the eight logical permutations of flat, the two filters and stereo linking. Both filters may be used together if needed.

Two jack leads are required to link a pair of Distressors for stereo use, and the manual suggests that you can fool the unit into giving you extra distortion by selecting stereo link, but not patching in a second unit. This halves the side‑chain signal by averaging the input with the non‑existent channel 2 signal. The result would be higher signal levels, for those times when only grunge will do!

Now that we've dispensed with the theory, no doubt you'd like to know how the Distressor stacks up — after all, at over £1200 and with only one channel, it needs to be something special.

Despite the slightly unfamiliar switching system, setting up is as simple as using a conventional compressor, and the only thing I rather missed was an output level meter. It soon becomes obvious that this compressor wants to be heard, and it's probably at its best adding smack to kick drums, thickness and attack to bass guitars, and solidity to vocals. On a complex mix, you have to be more sparing, and for routine dynamic range control you can usually get away with far less sophisticated devices. If you want pumping, a fast attack and release will deliver it instantly, but the best results are obtained with longer attack times, which really emphasise the percussive nature of sounds in a very positive way. Particularly impressive is the recommended setting for emulating opto‑compressors — you simply pick the 10:1 ratio, then set the longest attack possible and the fastest release. This simulates the characteristically slow attack and fast release of compressors based on lamps and photocells, creating a rich, attacking sound with no obvious gain pumping.

It soon becomes obvious that this compressor wants to be heard, and it's probably at its best adding smack to kick drums, thickness and attack to bass guitars, and solidity to vocals.

Experimenting with the distortion settings is interesting, and I'm glad to discover that the effects are subtle — some modern valve gear, in particular, places too much emphasis on deliberate distortion, and with some material the intermodulation products sound horrible. With the Distressor all you get is a gentle change in timbre — unless you really push Dist 3 to the limit, in which case things can turn a touch crunchy. There's no separate control for setting the amount of distortion you get, and the amber light usually stays off unless the gain‑reduction meter starts to show a few dBs of compression. To make the red light come on you have to use a longer attack time, so that the peaks sneak through and get caught by the distortion circuit, and on sound sources like snare drum, high levels of compression and distortion, in combination, can create a really 'smacky' sound. Dist 2 is rather more subtle and works well on vocals, adding a silky sheen to what is already a very nice sound.

If you're not sure what settings to use, pick a ratio somewhere in the middle of the range, set all the controls mid‑way, then adjust the input‑gain control until you have sufficient gain reduction showing on the meter. This results in a fine general‑purpose 'vanilla' setting that makes a good starting point for further adjustment. As the manual rightly says, it's very difficult to make this compressor sound bad, but there's still plenty of adjustment range if you're after something out of the ordinary.

Don't be put off by the Distressor's slightly quirky switching system, because it really isn't a problem, and it does provide access to a lot of features without requiring a front panel covered with switches. The rather chunky (some might say unsophisticated) panel graphics help you to see exactly what the controls are doing, even when you're not right on top of the machine, and the LED status readout is exceptionally clear.

As for the sound, it definitely picks up on what's good about vintage compressors and exploits it shamelessly. The opto‑compressor emulation is very convincing, and the optional distortion settings work well, providing you're discerning about what sounds you apply distortion to. For adding weight and 'angst' to bass instruments and kick drums, I can think of few compressors more able, and if you're one of those people who believe only tube technology can deliver the true classic sound, a few minutes spent using the Distressor might cause you to rethink your position.

The Distressor is a good example of the intelligent use of contemporary technology to emulate the best aspects of vintage devices, but it is still costly for a single‑channel unit.