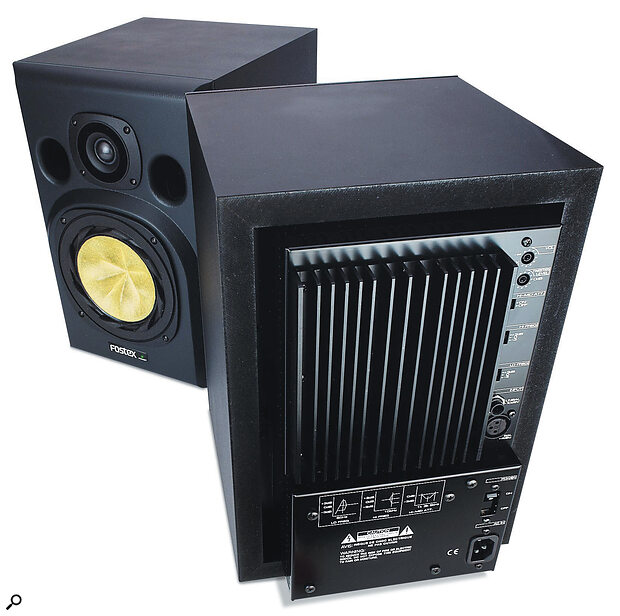 Paul White auditions some new active monitors from Fostex that offer a number of technical innovations.

Fostex may not be the first name that springs to mind when you mention high‑quality studio monitors, but they have been a big player in the OEM consumer loudspeaker market for many years and have accumulated a lot of experience in both design and manufacturing techniques. Their new NF1 studio nearfield monitor is available in both passive and active versions (the active NF1A is reviewed here) and claims a number of technological advantages over existing products in this market sector.

Outwardly, the NF1A is a fairly conventional two‑way active monitor, and it is suited to both nearfield work and main monitoring in smaller studios. The only obvious clue that something is different is the heavily embossed 'lemon‑squeezer' woofer cone — one of the more visual design innovations. This 6.5‑inch driver is based around a newly developed diaphragm which aims to reduce sonic colorations and self‑resonance. This cone design is also claimed to give a better transient response than conventional drivers and employs what Fostex call a 'tangential edge structure' to anchor the cone to its flexible surround in the most acoustically effective way. It certainly looks distinctive! This driver also uses a dual‑spider construction, presumably to prevent the voice coil from trying to rock in the air gap, and there's also a push/pull damping system to maintain control of the cone in both directions of its excursion.

The tweeter is a soft dome design and a little under one inch in diameter. It can reproduce frequencies up to 40kHz, but again it's not as simple as it seems. Conventional soft‑dome diaphragms tend not to be entirely airtight due to tiny holes in the damping material, so Fostex have developed special materials to eliminate holes and to reduce the moving mass by around 30 percent. This is also said to extend the frequency response of the tweeter. The drivers, which are magnetically shielded, are each mounted in a cast aluminium chassis for stability.

Interesting though the drivers are, it's the performance of the whole system that counts — the sound of a monitor depends also on how well the drivers are integrated with the rest of the design, especially in the case of active systems. The two drivers are fed from independent 60‑Watt amplifiers powered by a large R‑core power transformer which prevents power‑supply sag at high power levels. An electronic crossover operates at 5kHz (slightly higher than usual), though no details of the crossover slopes are provided. Similarly, the spec sheet claims an overall frequency range of 50Hz to 40kHz, though looking at the response curve suggests that the response begins to roll off pretty briskly beyond about 80Hz.

The cabinet, which measures 340 x 240 x 320mm, is a time‑aligned bass‑reflex enclosure that uses a patented internal baffle configuration. These are five‑sided, dish‑like sound reflectors designed to help cancel out standing waves within the cabinet — one to the rear and one at the bottom of the enclosure. In addition, the insides of the cabinets are conventionally damped. Cabinet mass and rigidity is also important, so Fostex have used 21mm thick MDF for the main enclosure with reinforcement building this up to a massive 33mm at the driver mounting points. The baffle and port edges are radiused to reduce diffraction, while a pair of two‑inch cylindrical ports provide the cabinet tuning. As both speakers are symmetrical, it makes no difference which is used for the left‑hand signal and which for the right.

Connection to the monitor is via both balanced XLRs (+4dBu) and unbalanced jacks (‑10dBV) and there's a screwdriver‑operated level trimmer — this was turned completely off as a default setting, which could leave a lot of people wondering why they can't hear anything when they first plug these speakers in! Power is delivered to the internal amplifiers via standard IEC mains connectors.

The response of the monitor can be tweaked to match the environment of the monitoring room via a continuously variable tweeter level control (±3dB) and a set of three slide switches. The first of these brings in a slight mid‑range dip at around 3kHz, while the second is a three‑way low‑frequency adjuster allowing 3dB of cut or boost to be added at around 60Hz. Finally comes the high‑frequency correction switch, which again offers 3dB of cut or boost, this time at 10kHz.

The Ear Of The Beholder

In listening tests, the NF1As came across as extremely tightly controlled and crisp. The sound is very detailed, with fabulous stereo imaging, though with the rear panel switches set flat I found the sound just a little too aggressive for my liking. Switching in the bass boost and the mid cut produced a result more to my liking, though the bass end still seemed a touch on the light side for speakers of this type. This impression may be due in part to the very tightly damped bass and mid, but my own Mackie HD824 speakers, which are not dissimilar in size or price, can move furniture! Nevertheless, bass notes come over evenly and with a great deal of clarity, which can sometimes make mixing easier than when the bass end hides all the sins in the mid‑range. As for the level these speakers can produce, I have no concerns at all — I gave in before the speakers did!

The Fostex NF1As are extremely well‑engineered speakers capable of incisive clarity and excellent imaging. My overall impression is that they err slightly on the side of being aggressive (but only slightly), which seems to be a situation the majority of musicians are comfortable with. In fact, the only flaw seems to be that the bass end is slightly lacking in depth — a problem which is common to much Japanese equipment — though in a small studio with no proper acoustic treatment this might turn out to be an advantage. However, the rear‑panel trimmers go a long way towards compensating for this. As I've remarked before, the active monitor market sector is very competitive at the moment, but these little monitors have enough positive attributes to make them worthy of serious consideration.

A remarkably detailed monitor that would best suit users with smaller, untreated rooms where further bass extension might lead to problems.