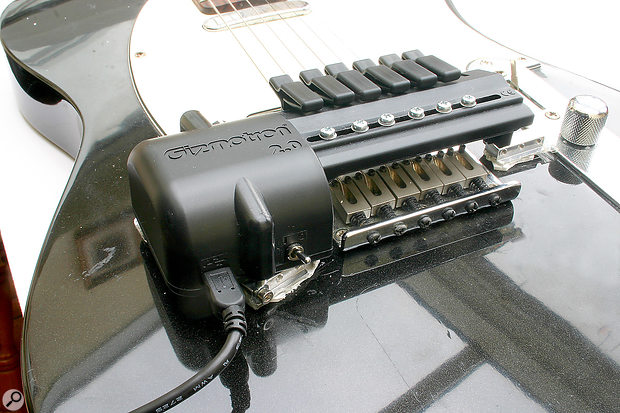 The curious Gizmo polyphonic guitar sustainer is reborn. Can this new version succeed where the original failed?

Despite its intriguing potential, the ‘Gizmo’, invented in the mid 1970s by 10cc’s Kevin Godley and Lol Creme, was beset by manufacturing difficulties and reliability problems; it was a commercial flop, and surviving examples are few. Jumping ahead to 2004, Aaron Kipness, who was then making restoration parts for the Hohner Clavinet, decided the idea was worth pursuing, given the potential benefits offered by modern materials and manufacturing techniques. With a few originals in various stages of repair to guide him, he developed an improved version which, I’m informed, involved using a 3D printer to prototype parts for many iterations before the design was finalised. The current model, reviewed here, is known as the Gizmotron 2.0.

With versions available for guitar and bass (each type can be adapted via a replacement set of wheels and levers for use on the other), the Gizmotron 2.0 offers infinite sustain and polyphonic capability, and it can produce a variety of pseudo-bowed string sounds, ranging from bass- to violin-like (switching guitar pickups produces a wide range of usable timbres). Essentially, it’s a mechanical device that uses rotating, serrated wheels to ‘bow’ the strings, which can be played individually via levers or keys that push the wheels into contact with a rotating shaft, and then into contact with the string. Unlike the E-Bow (which requires nothing to be fixed to the guitar), the Gizmotron can play any number of strings simultaneously, and it sounds more like genuine bowing.

I was sent the guitar version, and its six levers that govern the bowing action can be controlled to some extent by pressure, allowing you to determine the attack of the sounds. The device, which comprises the six keys, their wheels and a motorised shaft, is necessarily fairly bulky. It sits over the bridge of the guitar so that the rotating wheels are close to, but not fouling, the bridge saddles. The three-point mounting system, which fixes via adhesive pads, is height adjustable, and the lever/wheel assemblies are located on a track that allows their spacing to be adjusted to suit different instruments. Each wheel is mounted on a sprung steel arm, and once it’s pressed back onto the rotating roller, it twists in position slightly to make contact with the string. Power for the motor comes from a 500mA USB PSU and connects to the motor section via an included cable. A toggle switch starts and stops the motor and a rotary control sets the motor speed.

Installation is fairly straightforward providing you have a bit of patience, but some guitars are more fiddly to adapt than others — I tried fitting it to a Telecaster with an ‘ashtray’ bridge but the three screws protruding from the bridge saddles were somewhat on the long side and tended to foul the wheels; and if I moved the Gizmotron further from the bridge, the pickup got in the way. Shortening the saddle screws would have solved the problem, but as I have a beaten up Squier Telecaster with the modern six-saddle bridge and flat bridge plate to hand, I took the easy option and fitted it to that.

The height needs to be adjusted so that the mid point of the wheels sits above the strings, and the lever assemblies can then be moved along their track such that each wheels sits a millimetre or so away from the upper edge of the string, so the strings ring cleanly when not being bowed. Once in place, a crosshead screw locks each lever assembly in place on the track. A spare set of wheel assemblies is included.

The manual suggests running in the wheels for an hour or so at a low speed, presumably to smooth off any rough edges — and that’s a good opportunity to get used to playing the strings using the ‘keys’ rather than a pick or fingers. There’s definitely a knack to pushing the keys down hard enough to initiate the bowing action without going too far, and I found this rather trickier than I’d anticipated. I also found it difficult to set things up so that each string triggered with a similar travel of the key; I’d have felt happier if I could bolt the device down and then have separate X, Y and Z axis adjustments that didn’t involve fiddling with the mounting feet.

Untreated, the bowed sound is rather dry and brass-like, with the bridge pickup providing a fairly edgy bowed sound, and the neck pickup coming over a little warmer. The mid- and lower-register sounds have a very cello-like quality to them, and the demos I’ve heard of the bass version of the Gizmotron come over as sounding very like a bowed double bass. At lower motor speeds the bowed effect is more lumpy, and it smooths out at higher speeds, but both are musically valid sounds.

A few well-chosen effects will really bring the sound alive. Once you add a touch of reverb and chorus you have a very plausible string machine, although judging the right pressure to get a clean note attack can be tricky. There’s something almost Mellotron-like about the end result. Although the mechanical motor noise and some wheel chatter is audible, it shouldn’t be loud enough to put you off when recording and should be completely drowned out in live performance.

I found it a little disconcerting that, on my particular guitar, there was a little audible breakthrough from the motor to the bridge pickup, though thankfully there was no such problem with the neck pickup. For recording, a gate or expander would have cleaned up the sound adequately but the issue is worth mentioning, as it may vary from guitar to guitar, with single-coil pickups being most susceptible to electromagnetic interference. If used live there’s also the length of the USB cable to take into consideration (the supplied is about 3m).

The close proximity of the levers means you have to think out your fingering, and playing anything fast was beyond me. Slower parts feel more comfortable and you can exploit the natural slow attack of a string section by being more gentle with levers; a faster press will give you a fast bowed attack if that’s what you need, and works well for arpeggios. You have to avoid pressing too hard, as the wheel position can twist out of place and kill the note, so some sort of adjustable end-stop might have been a good idea. Being such a bulky unit means that conventional playing becomes a little more tricky, but you can use the Gizmotron as a palm rest when picking notes. Obviously note damping is out, so it’s unlikely that you’d want it fitted to your main guitar.

My take is that the Gizmotron would best be fitted more permanently to its own dedicated guitar, in which case I’d be inclined to drill holes in the little aluminium feet and screw those directly to the guitar body rather than rely on the sticky pads (though those grip perfectly well as long as you clean the guitar surface with alcohol to get rid of any polish residue). My cheapo Squier sounded fine and, given the price of such a guitar, drilling holes in it would be no big deal. There’d be little point in using the Gizmotron on your favourite 59 ‘burst’ Les Paul or your new PRS Custom, as the end result probably wouldn’t sound that different.

Having a bowed sound is a bit of a one-trick thing, but the results are more organic than from a guitar synth and really come into their own in the studio where you can employ all your usual tricks to get exactly the result you want. The more ambitious user might also think about feeding the guitar through something like a Roland SY-300 guitar synth or one of the EHX organ or Mellotron pedals to further extend the range of sounds available. I tried it through the EHX Mel9 and the results were uncannily authentic. The Gizmotron isn’t for everybody, that’s for sure, and be prepared to spend some time tweaking both it and your playing technique, but if you were intrigued by tales of the original Gizmo, you’ll want at least to take a look.

There’s no direct mechanical alternative other than using a real bow, but other alternatives include using a MIDI guitar to trigger samples or, for monophonic parts, an E-Bow. The discontinued Moog Guitar can also produce bow-like results, and offers more besides, but you’ll struggle to find one.

While reviewing the Gizmotron 2.0, Paul created a few audio files to give you a feel for its sound and potential.

I captured these audio files while reviewing the Gizmotron 2.0, both from the Gizmotron itself and, to provide a reference, the E-Bow, the similar sound of which will be familiar to many more readers (note that the E-Bow operates on a single string at a time, while the Gizomtron can control the sustain of each guitar string separately).

The sound form the guitar when using the Gizmotron with no effects or processing. Can you hear the sound of the motor being picked up?

The sound from the guitar when using an E-Bow, again, with no effects or processing.

The sound comes alive when treated to a little processing, even just chorus and reverb, as here.

For reference purposes, some E-Bowed guitar with similar processing.

More adventurous effects such as from Electro-Harmonix’s Mel9 mellotron simulation pedal can also benefit from the sustain offered by the Gizmotron.

For the sake of completeness, some E-Bowed guitar played through the same Mel9 pedal.

The Gizmotron 2.0 takes the original ‘70s concept and makes it workable. In many ways other technology has overtaken it, but there’s still something unique about its sound.