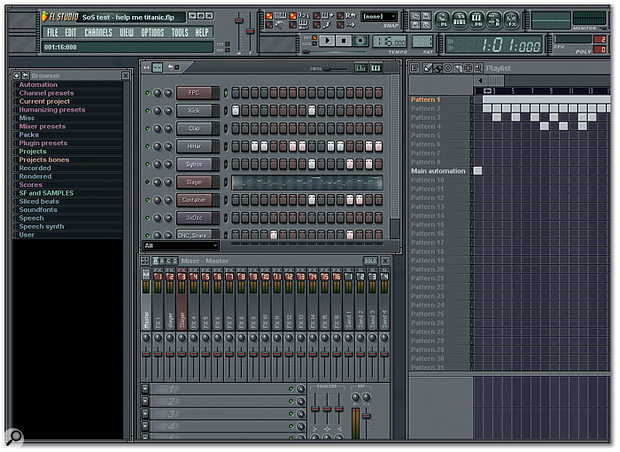 FL Studio has always been popular with those seeking a cost-effective, easy-to-use alternative to the 'big name' sequencers. The latest version adds a new drum sequencing tool, high-quality time-stretching and video support.

Image Line's FL Studio is one of the most popular 'virtual studio' packages, and has now reached version 5. As the program was described in detail in the SOS version 4 review in November 2003, I'll concentrate on the new features here. The top-of-the-range FL Studio Producer and XXL benefit the most from the update, as they are full-fledged digital audio workstations (DAW) for handling all your audio and MIDI needs, whereas FL Studio Fruity Loops and Express don't record audio, so some updates don't apply to them. However, all three versions include the same software synths ('generators' in Fruity-speak) and effects. All three can function as a stand-alone programs with VSTi, DXi and Rewire hosting capability, or work within another DAW using any of the above standards.

Some of the upgrades are minor, such as improvements to the Granulizer plug-in and the note pad. Other improvements apply only to the optional Fruity Slicer, a beat-detection plug-in, and don't concern the basic package. But FL Studio 's raison d'être is creating sounds, and there are several new generators that are pertinent, as well as new sample-stretching algorithms.

The new Fruity Pad Controller (FPC) bears an obvious visual resemblance to Akai's MPC range of sampling drum machines, and in this context might seem redundant at first, being a beatbox plug-in for a beatbox sequencer. There is not much that can be done with the FPC that FL Studio itself can't be set up to do, but it is nice to have drum packages pre-rolled and ready to go under a pad controller. Click on one of the 16 pads and hear its associated sample. The pads are already mapped to MIDI notes, but it only takes a mouse scroll to reassign any pad to any MIDI note. Then hit record and play away on your favorite flavour of controller. There are two acoustic drum sets included, but making your own is only slightly harder than reassigning pad notes. Tab to the Layer Properties page and click on the file folder icon. You'll have to scroll through your drum samples, but your choice will pop right into a 'layer'. On this page you can also set the velocity trigger range of the sample, as well as the volume, pan and tune. You can also add further layers to be triggered at different velocities. Loops as well as single-hit samples can be loaded, and a whole setup can, of course, be named and saved. A third page adds an overall pad mixer. If you are in a hurry or rhythmically challenged, there are more than 40 pre-programmed patterns in various styles that can simply be dropped in or used as templates. 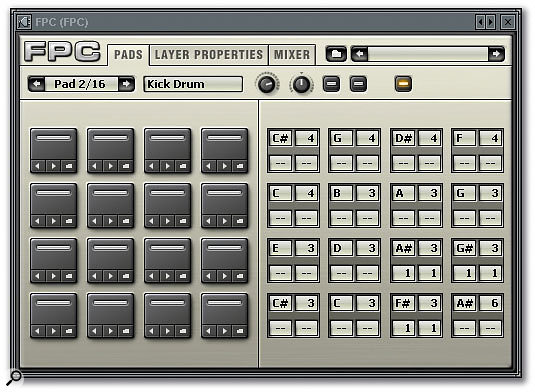 The Waveshaper effect plug-in is a wave distortion unit with a twist: it maps input to output amplitude using points on a graph. The resulting graphed lines are splines, in Fruity-speak. The axes of the graph are simply marked In and Out: input amplitude values rise from left to right and are shown by a vertical line when a signal is present. The output for any input value depends upon where it falls upon the graphed spline, with the centre line indicating no change. Waveshaper is deceptively simple, especially to those of us used to compressors, thresholds, envelopes and other time-based effects. The presets cover a wide range of effects, from simple buzzes to gating/compression or valve emulation. You can round off the initial transient hit of a sound or create one, thicken the tail of a hit or affect only the sound in between: simply add a point to the spline at the appropriate amplitude level and pull the spline into place. The graph can accommodate hundreds of break points, and the 'fuzzy' presets do just this; but it is also great fun to add a point to a simpler shape and pull it to an extreme to hear the effect. Waveshaper might not be the first effect you'd reach for to use in a song, but it might just fit the bill where other effects don't go far enough! 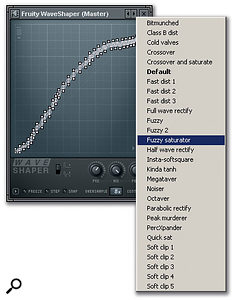 Waveshaper is a distortion plug-in that allows the user to draw a function mapping input to output levels.

The last new plug-in is Video Player. Image Line have been behind the times when it comes to video support, but they had their reasons: they are a small company and were concerned about keeping up with the proliferation of video codecs. So Video Player opens, plays and syncs to video, but doesn't render video. You can score against the video, but you'll have to render audio-only and use another program to put the two together as a single file. Video Player successfully opened both DV AVI and DVD file formats from my hard drive, so the likeliest suspects are covered. It is an optional plug-in, so if you need it you'll have to fork over more cash, but it only costs $35, so it won't break the bank if it is a must-have.

Another major upgrade to the basic FL Studio package is sample time-stretching and repitching. Image Line told me that their new stretching algorithm was the best in the world. I can't substantiate that claim, but I know it is darn good. Not only will it massage a sample into a song, but the 'Elastique' settings are great for pure sound design. If twisting audio into something never before heard by human ears is your cup of tea, the Elastique engine will start your kettle boiling. I dropped some dialogue into the sample synth, turned some knobs and let it loop a couple of times. The sound could have come from some giant cave-dweller's undersea skipping phonograph. Not something to use in every pop song, but good for late-night experimental dementia or a sci-fi soundtrack.

Other, smaller additions to FL Studio 5 include new automation clips in the Playlist window and better audio tempo control. There are also some new piano-roll tools. Best of all, it is all free for customers who bought their copy on-line from Image Line. In fact, all upgrades are free to on-line customers. For those who bought a copy the old-fashioned way, at a music shop, only one upgrade is free. But for a one-off fee of $29, they can get life-time updates, too. So whatever your situation, if you're an FL Studio user the upgrade is definitely worth the price!

Thanks to Image Line's commendable upgrade policy, lifetime upgrades are free for most users, and available for $29 for those with boxed versions. What's not to like?