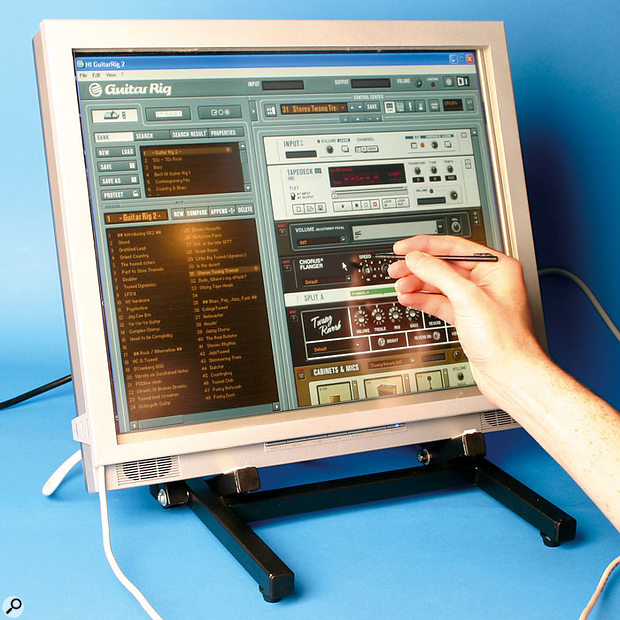 Everyone loves to gripe about mice, but although touchscreens and graphics tablets have been around for a while, Intatouch are the first company I know of to market one specially for musicians. Their design is a simple pressure-sensitive, transparent panel that fits over the front of your flat-screen monitor and connects to your Mac or PC via USB. A small stylus allows you to position and click the on-screen pointer, meaning that — in theory — you can do everything that's normally done with the mouse by 'drawing' on the screen. It starts at just £159 for a 15-inch version, and most people will be able to use it with their existing flat-screen monitor.

You can attach the touchscreen to any securely mounted flat-screen monitor — it just hangs over the top — but positioning it so it's comfortable to use is more of a problem. Obviously, it needs to be within easy reach, and in many ways, the ideal plane would be closer to the horizontal than to the vertical. Also, you really need to be looking straight at the screen: because there's a gap between the touch screen and the LCD beneath, the two appear slightly out of alignment if viewed at an angle, making it hard to work out exactly where to draw. Intatouch supplied the review unit with a guitar amp stand, as seen above, which is a cheap and reasonably effective answer to the problem.

You can use the touchscreen with a single display, but dedicating a second LCD to it would allow you to have your primary screen mounted in a conventional position, with the touch screen horizontal for easier drawing. A second screen could be run at a relatively low resolution, so you wouldn't have to draw so precisely; this would also compensate for the loss of visual sharpness caused by the extra layer of 'glass'.

Once you've got the monitor working, a simple calibration utility asks you to touch the four corners of the screen in turn, and you're ready to go. A blue and white box floats above your applications at the bottom right of the screen. By default, tapping the stylus on the screen generates a left-click, but touching this box changes things around, making every tap a right-click. This is fine, but it would be better if it was more flexible. The box can be hidden, but not moved around the screen, so it can blot out bits of your music applications. Also, I would have liked a mode whereby touching the box would switch over to right-click behaviour only for the next click, not permanently — it's not that often I want to do lots of right-clicks in a row. There's an alternative operating mode where a click is registered when you take the stylus off the screen, rather than when you hit the screen, but I didn't find this awfully useful.

Quick On The Draw

Unlike a mouse, the touchscreen allows you to move the pointer instantaneously between any two points on the screen. It's fantastic for software where you need to 'draw' things like automation curves, EQ responses, waveforms, envelopes, patch cords and the like, and it is great for manipulating faders and drawbars. On the other hand, I found it even more awkward than the mouse with rotary knobs, while dragging and dropping can be frustrating — you have to maintain a continuous pressure on the screen in order to avoid accidentally dropping things. The mouse will still work in conjunction with the touch screen, so you could always go back to it for these tasks.

Unlike Jazz Mutant's Lemur, this touchscreen is 'monophonic' — you can't use multiple styluses to manipulate several controls at once. However, it's also unlike the Lemur in not costing £1500-plus, and not needing complex Max/MSP or Reaktor programming to be useful. In general, this touchscreen is a very attractive alternative to the mouse, especially if you use graphics software too, and an affordable one. It also has obvious benefits for those suffering RSI or similar. The only real difficulty I can see is finding the best way to mount it, and that's far from an insoluble problem.

Intatouch's touchscreen is a neat and inexpensive alternative to the mouse.