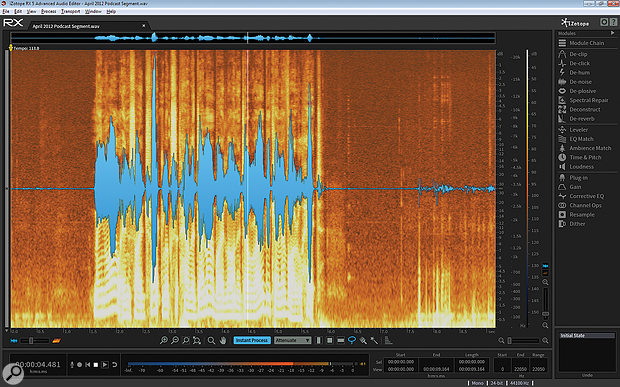 New in RX5 is an Instant Process option that can really help to speed up repetitive tasks.

It seems that along with Christmas, another regular annual event we can rely upon is a new version of iZotope’s RX Audio Editor software. Incorporating an ever-expanding collection of sophisticated tools for repairing, restoring and enhancing audio files, RX has now reached version 5, with both standard and Advanced editions available. The company have also released a new flagship product called the RX Post Production Suite; as the name implies, this not only includes RX5, but also the Insight metering system, RX Loudness Control and RX Final Mix products as well. The idea is to provide a full suite of tools that cover all aspects of audio post-production including audio repair, mixing and final delivery.

I reviewed the impressive Insight audio analysis and metering plug-in (v1.01) in the March 2013 issue of Sound On Sound, so will cover it only briefly here. Insight is included in the Advanced version of RX5 as well as the Post Production Suite and, in brief, provides a customisable loudness and true-peak meter, with support for channel formats up to 5.1 and presets for the international BS.1770 loudness standard variations. It also includes stereo and surround-sound ‘sound stage’ displays, spectrum analysers, and both 2D and 3D spectrogram modes. The display window can also be customised to show or hide the different display options as may be required for different applications or preferences.

The latest version is 1.04, but the only significant changes compared with the version I reviewed, apart from a few small bug-fixes, are to the supported platforms and plug-in formats. For example, Insight now supports Mac OS 10.11 and Windows 10, with host support for Pro Tools 12.3, while DirectX support has been dropped.

RX Loudness Control works as an offline AAX AudioSuite plug-in in Avid’s Media Composer and Pro Tools (v10 to 12), or as an Audio Extension for Adobe’s Premiere Pro. Its functionality is derived in part from the loudness-normalisation algorithms within Insight and the Loudness Modules in RX4/5, but it also has features that go beyond the capabilities of both. In essence, the loudness parameters needed to comply with a particular programme delivery specification — such as the integrated loudness target level and maximum true peak value — are dialled into RX Loudness Control, after which the programme mix (in any format from mono to 5.1) is then rendered through RX Loudness Control.

The audio is analysed (faster than real time) and any transgressions are then displayed to allow the user to manually amend the mix to resolve any detected issues. Alternatively, the audio material can be corrected automatically and transparently through the plug-in’s built-in compression and peak-limiting tools.

Designed to simplify and speed up the task of mixing audio, the RX Final Mix plug-in combines automatic dynamic EQ and true-peak limiting tools and is aimed primarily at video editors and for use in TV and film audio post-production. The plug-in can be employed on stems or the final mix bus, supports all surround formats up to 7.1, and is designed to help control and blend multiple mix stems. 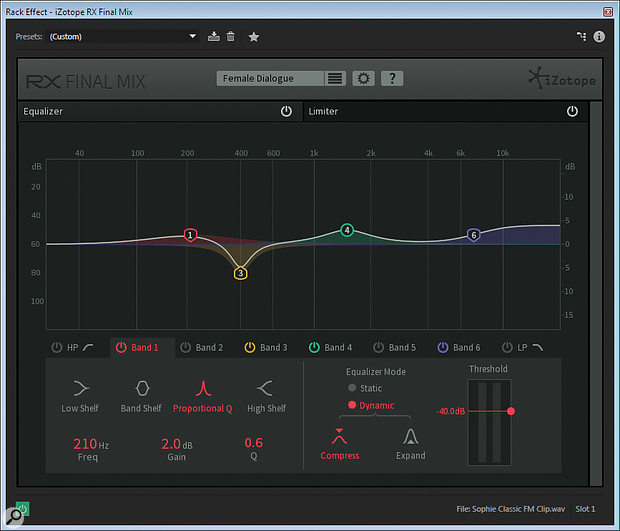 Final Mix incorporates dynamic EQ that is optimised to increase the intelligibility of dialogue.

The dynamic EQ is particularly useful in helping to maximise speech intelligibility through intelligent un-masking: pushing down any parts of the mix spectrum that might obscure important speech frequencies, moment by moment. It is equipped with six parametric bands, plus high- and low-pass filters, any of which can be set manually or for automatic programme-dependent operation. The latter has both compression and expansion options with user-adjustable thresholds set independently per band. Different parts of the audio spectrum can therefore be attenuated or emphasised and, when skillfully applied, this provides improved dialogue clarity by reducing any masking elements from background music and effects. It can also increase the dynamic impact of special effects, for example by raising the low-frequency region during explosions, and the like.

Moving on to the limiter feature, this can be optimised either for transparency or low latency, with three different sound-character options (clear, smooth or thick), and the ballistics are intelligently programme-dependent. The true-peak limit threshold is adjustable, and a separate gain slider allows the average volume to be increased by up to 20dB, if required. 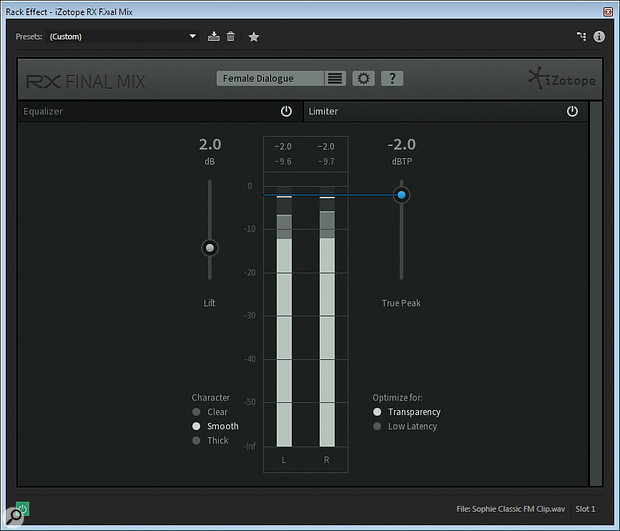 The other main element of Final Mix is a simple-to-use limiter.

The core RX audio restoration package is already such a powerful and versatile system that it might seem there is little room for practical improvement with each new generation. However, the Advanced version of RX5 included with the RX Post Production Suite manages to squeeze in a number of new workflow enhancements, better default settings, and closer integration with Avid’s Pro Tools — and even a few new processing modules, too! 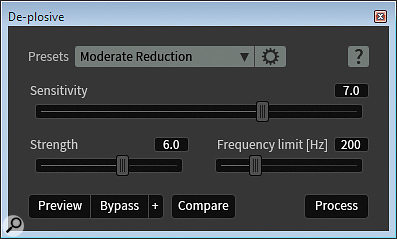 The dedicated De-Plosive module is a new addition to RX5 Advanced.

The headline feature for the Advanced version of RX5 is a brand new De-Plosive module, which, as its name implies, is designed to remove distracting plosive sounds from dialogue tracks. This is claimed to be an “industry first” (although CEDAR came up with their DeThump algorithm over 15 years ago...). Another all-new module for RX5 Advanced is the versatile Signal Generator, which can create a variety of precise test tones with different wave-shape options, filtered noise, profanity bleeps, and so on. The Leveler and Ambience Match modules from RX4, which are only available in the Advanced version, have also been updated and improved. The Leveler module analyses a dialogue or vocal track and works out an intelligent clip-gain envelope to de-breath, de-ess and generally smooth out the voice level, while the Ambience Match plug-in automatically constructs a consistent background ambience track from whatever ambience already exists, which is particularly useful when rebuilding heavily edited dialogue or working with ADR tracks. 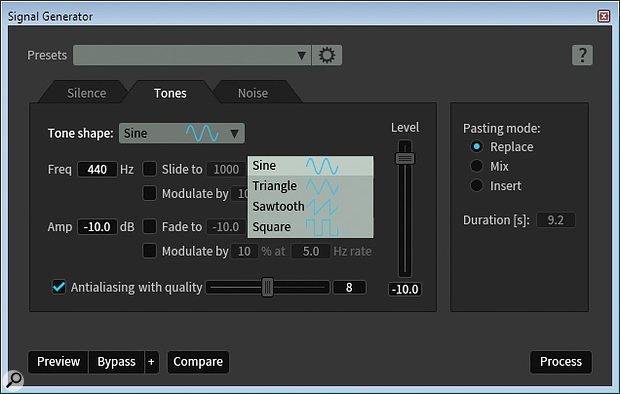 A welcome addition to RX5 Advanced is the new Signal Generator module.

Both the Standard and Advanced versions of RX5 benefit from a new Instant Process tool button, which has been added to the bottom of the main audio display window. This is a semi-automatic version of the Spectral Repair module, and it works much like the ‘magic eraser’ tools found in photo-editing programs. If the Instant Process button is pressed, a problem sound element can be highlighted with the usual shape selection tools, and instantly attenuated, de-clicked, faded or replaced (as pre-selected in a configuration box). This feature provides a much quicker means of removing lots of clicks, for example, and really speeds up repetitive tasks.

Another new module provided in both versions of RX5 is a greatly improved EQ module, now called Corrective EQ. This features six separate parametric bands, plus configurable high- and low-pass filters (with four slope options). The module can also be switched between ‘analogue’ or ‘digital’ modes, with usefully different filter characteristics. A new Module Chain facility is also provided in both versions, and this allows any number of different RX5 modules to be loaded in a specific order, configured, and then operated automatically in sequence with a single click to perform complex audio processing tasks in a single pass. 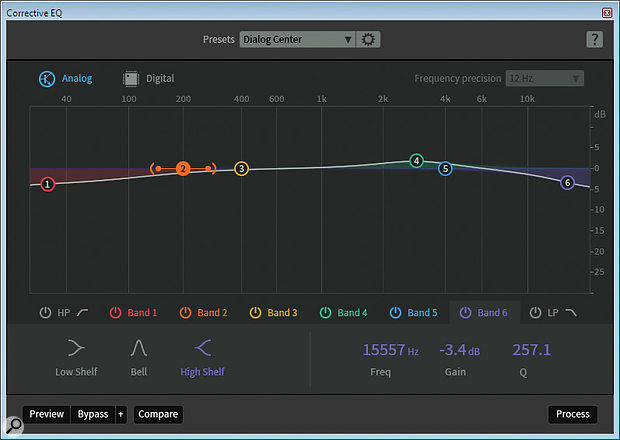 There are a number of other worthy enhancements to this latest version of RX, starting with a subtly improved toolbar layout, with bigger icons and more obvious navigation and zoom controls. Retina screen support has been added for Macs, giving sharper text and graphics. And when working with long audio files, the Marker and Region search facilities have been improved to make finding required sections quicker and easier. Over 60 new ‘problem-oriented’ presets have been provided for the various modules, too. 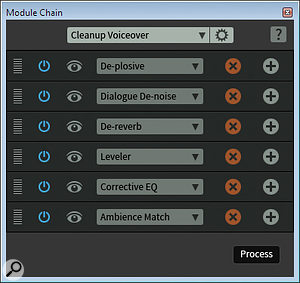 The Module Chain feature allows multiple RX processes to be combined into a single macro.

I’ve been an enthusiastic user of iZotope’s RX for a very long time now, and find it an extremely capable audio restoration platform — although it takes some persistence and diligence to properly understand and master its sophisticated processing tools. RX5’s new De-Plosive module is a very welcome addition to the already quite comprehensive suite of tools, and it is highly effective. I also like the improved Corrective EQ module very much, while the new Instant Process feature is handy for simple repetitive spectral fixes. Another useful new facility for more complex repetitive work is the Module Chain, which allows a string of processes to be performed in one click. Experiments with the Ambience Match and Leveller modules showed them to be easy to use and very effective, too, and I can see them becoming popular in audio post-production for film and TV.

Moving beyond RX5 Audio Editor, the full-featured RX Post Production Suite is a very useful collection of tools for the film and TV post-production, world where loudness normalisation is now a crucial element. The Insight metering and Loudness Control plug-ins make it very straightforward to conform with the appropriate loudness standards, either while mixing or to correct pre-recorded material. The Final Mix plug-in is the only element of the suite that was entirely new to me, but I was impressed with the capabilities of its dynamic equalisation and limiter processes — although such powerful tools require great care, as they can wreck a mix more easily than improve one!

CEDAR’s Cambridge Suite offers a similarly comprehensive collection of audio restoration tools that are more advanced and easier to use, but at a much higher price and less oriented towards film and TV post-production.