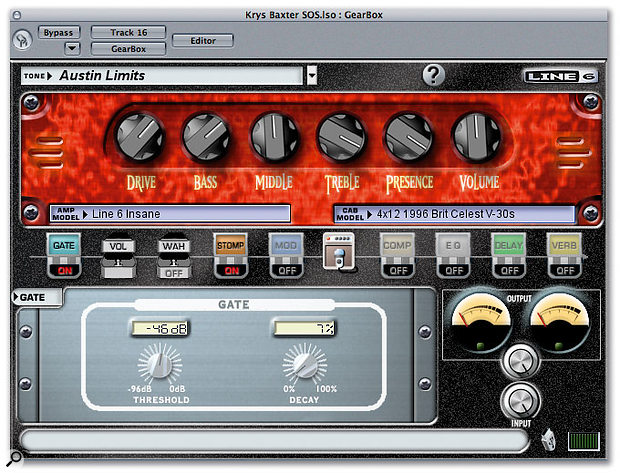 Line 6 first made their name with the Amp Farm plug-in, but since then they've concentrated on hardware products, and Gearbox Plug-in makes their latest range of amp and effects emulations available in a plug-in for the first time.

Line 6 have always been at the cutting edge of guitar amp and effect modelling, and over the past year they've made fresh inroads into the computer recording market by offering a range of Toneport USB interfaces. These come bundled with a piece of software called Gearbox, which puts Pod XT modelling algorithms into your computer. Unlike conventional plug-ins, Gearbox has, until now, only allowed you to record through the modelling software, in much the same way as you might record through a Pod XT or other hardware guitar preamp, but finally Line 6 have come up with a true plug-in version. Appropriately enough, it's entitled Gearbox Plug-in.

The obvious advantage of using a plug-in is that you can change the sound after recording, and also use multiple instances on different tracks, the actual number depending on computer power. Currently Gearbox Plug-in works as a Windows VST or Mac Audio Units plug-in, with RTAS compatibility scheduled for release as a free update in early 2007. Dual-core and Intel Macs are already supported.

One big deal about the Toneport range is its Tone Direct monitoring, which allows you to hear the effect of the Gearbox modelling while recording with extremely low latency, independent of the buffer settings used in the host software. Gearbox Plug-in also runs this stand-alone version of the Gearbox application, allowing you to monitor one instance of the plug-in using Tone Direct monitoring, so you won't be troubled by distracting delays when overdubbing.

Gearbox Plug-in comes with a very basic Toneport-style DI-box interface, which must be connected to the computer in order for the plug-ins to run; you must also use this interface if you need the Tone Direct delay-free monitoring. However, if your DAW system can operate with small buffer sizes so that latency isn't an issue, you can use your own interface for recording, providing you leave the Line 6 interface hooked up to a USB port. In this role, the Toneport DI basically functions only as a 'dongle' for the software. It also holds the licence keys for any optional expansion packs you may have bought.

Having said that the interface must be connected for the plug-ins to work, if you already own a Line 6 Pod XT or one of their Toneport interfaces, you can buy the plug-in capability separately and have it keyed to the piece of hardware you already own. Furthermore, if you have a Pod XT and you've already paid for extra model packs, these will be recognised and become available when you buy the plug-in functionality, so you don't have to buy them again just so you can use them as plug-ins. You still have to leave your hardware connected for the plug-ins to run, but you don't actually have to use it.

The standard Gearbox Plug-in package comes boxed with an installation disc plus the Toneport DI. This has a single high-impedance input optimised for electric guitars, and is both simple and compact, with just the guitar input jack and a monitor level control on the front panel. There's also an input pad switch in case your guitar has very hot pickups. On the back of the case are two balanced outputs that would normally feed your monitor speaker system or mixing desk, plus a DI output that allows you to use the hardware as a more conventional instrument DI unit. A stereo headphone jack on the rear panel allows you to monitor via phones when recording or mixing, and the USB socket links to your computer. The Toneport DI is buss-powered from the computer and requires no additional PSU. A security slot in the rear panel allows a security cable to be fitted if you plan to use the unit in an environment where it might attract the attention of light fingers!

The Toneport DI provides extremely low-latency monitoring and serves as a dongle for the Gearbox Plug-in software.You could use the Toneport DI's balanced analogue direct out to feed into your main recording interface if you don't want to use it as your sole interface, or you can set up a combined driver to make them both accessible at the same time, though in my experience this increases latency and is often more trouble than it is worth. While this increased latency won't affect what you hear while recording via the Toneport DI's Tone Direct monitoring, it may be a problem when you come to play virtual instruments, so if your system has a low enough latency not to bother you, the simplest solution is to use the Toneport DI simply as a dongle. Conversely, if all you do is record one part at a time anyway, you could use the Toneport DI as your sole interface and plug a basic mic preamp into the instrument input for recording vocals and other miked sources. In this latter scenario, though, it might be more cost-effective to buy one of the Toneport models that has mic preamps already built in and then buy the plug-in capability to go with that.

Gearbox Plug-in can be bought in one of two bundles. The Silver version includes 18 guitar amp models, 24 guitar cabinets, five bass amps, five bass cabinets, six modelled mic preamps and a total of 30 stomp box or studio effects. This is, in essence, the same package as you get in the stand-alone Gearbox software that comes with existing Toneport products, but in plug-in form. If you need more models, you can either buy them as updates later or opt for the Gold bundle. This is a little more expensive, but gives you all of the currently available expansion model packs, providing access to the full range of Pod XT and Bass Pod XT models, plus all the add-on Vetta models. This package comprises 78 guitar amps, 24 guitar cabs, 28 bass amps, 22 bass cabs, six mic preamps and over 80 effects.

The majority of computers with inbuilt USB will work fine with Gearbox Plug-in, but to make certain, you can download a utility called Line 6 Monkey from the Line 6 web site and it will do a compatibility check for you. This same software is also needed to activate the plug-in functionality as you register the product on-line, as well as to install any purchased add-ons.

Installation is quite painless, and within minutes I had the software installed, activated and appearing as an AU plug-in within Logic Pro. We've done a full review of Gearbox as part of our recent reports on the various Toneport products (SOS February 2006: www.soundonsound.com/sos/ feb06/articles/toneport.htm) so I won't go into a great deal of depth concerning the sounds and effects here. Suffice it to say that they are subjectively identical to what you get from a Pod XT, with some additional models for bass guitar and vocal processing, so if you like the sounds and effects in the Pod XT, you won't be in any way disappointed. Though the Silver bundle doesn't have all the Pod XT models, it offers all the most popular ones.

My test system comprised an Apple G5 dual 2.7GHz Mac with 4GB of RAM, but the CPU meter showed me that all instances of Gearbox Plug-in were loading into just one of the processors. I found I could get five or six instances running at one time without CPU error messages — the exact number depends on how many effects and so on you have active in your patches. If you switch off processing blocks within the plug-in, the CPU overhead is reduced.

While there are cheaper amp modelling products, I've always felt that Line 6 are at the front of the pack where conventional guitar sounds are concerned, and although the Gold bundle might seem like a lot of money to pay out in one hit, it gives you everything Line 6 have to offer in this area, including all their bass amp models and some extremely useful mic preamp emulations. The effects section can also be used without the amp modelling if all you want to do is add some nice effects to existing tracks. The Pod XT has a big following from studio musicians and having it available as a plug-in is a very attractive proposition, while the bass and vocal processing models add to its versatility. Having the Gold and Silver options both available makes it possible to buy into the products at two different levels, while retaining the opportunity to update later, and if you're a Line 6 Toneport or Pod XT user, it's great that whatever model packs you buy work both in the hardware and the plug-in worlds.

There are several other established amp modelling packages that work as plug-ins, foremost among them being NI's Guitar Rig 2 (reviewed in February 2006), IK Multimedia's Amplitube 2 (July 2006) and Waves' Guitar Tool Rack (November 2005). The NI and Waves packages feature hardware elements: NI's optional Rig Kontrol combines high-quality guitar DI with a floorboard for foot control, while the Waves package comes with a guitar-optimised DI box designed in conjunction with Paul Reed Smith. IK announced a hardware controller, the Stomp I/O, some time ago, but it hasn't yet appeared in shops. All three are excellent products, though none offers the extremely low latency monitoring you get with the Line 6 hardware.

If you want the sound of a Pod XT but the flexibility of a plug-in, this is the product you've been waiting for.