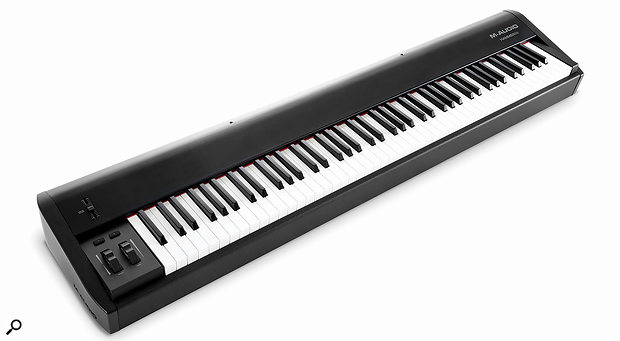 There are many computer-based MIDI musicians who need extensive real-time control over their software and hardware, typically in the form of a well-specified keyboard controller bristling with knobs, faders and buttons (and, of course, lots of LEDs). However, not everyone needs an all-singing, all-dancing keyboard controller, requiring only an 88-note weighted keyboard with a decent feel, and just enough additional features to perform a handful of basic/essential functions, so it would clearly make no sense to shell out big bucks for features that will never be used. With those requirements in mind, Hammer 88 fits the bill rather nicely.

The first impression on unpacking the Hammer 88 was how solid and well-built it is: there’s not a trace of plasticky cheapness here. Weighing in at 17.5kg, it would still be manageable to lift by one person even in a reasonably substantial flightcase. The front panel provides just five controls: one fader, two buttons, a pitch wheel and a modulation wheel (both sensibly mounted on a left-hand panel, not above the keys).

The Hammer 88’s rear panel features quarter-inch sockets for sustain, footswitch and expression pedals, a MIDI out socket, a USB-B port and an input for the external power supply.

The rear panel is similarly minimalist: a USB connector, three footswitch sockets, and for when USB connection is not an option, an external wall-wart power input and a MIDI output. The Hammer 88 can run on USB bus power; since there is no on/off switch, the red glowing of the pitch and mod wheels are the only visual indication the unit is on. No additional drivers are needed for USB functionality — just plug in, select the Hammer 88 as a MIDI input device in your DAW and you’re ready to go.

The unit ships with factory default settings for the panel controls: the fader sends CC7 (volume), the two buttons send incremental +/- program changes, whilst the two wheels do what you’d expect, ie. pitch-bend and CC1 (modulation). The keyboard’s velocity response curve is preset as ‘hard’ (ie. a concave exponential curve), which will probably suit your average pianist, but may prove hard work for those used to a lighter, synth key action. There’s no way on the keyboard itself to reassign any of these functions, so M-Audio provide a freely downloadable app (Win and Mac OS), the Hammer 88 Preset Editor, to enable custom configurations. 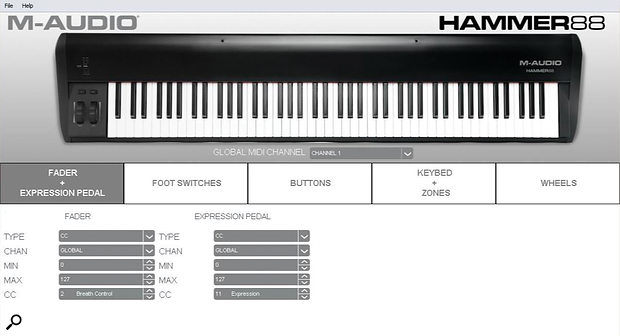 The Hammer 88 Preset Editor, showing the fader assigned to Breath Control (CC2) and the Expression Pedal assigned to Expression (CC11). Both are transmitting on the Global MIDI channel (Ch1) across their full zero to 127 range.

Just fire up the Editor app, and as long you’re USB connected, the app and keyboard are ready to talk to each other. The first thing to note is that changes to the settings take no effect until you send them to the keyboard (File/Send Preset). However, the Editor app threw up an “error connecting to device” message when I attempted to send the changes I’d made. It transpired that the app wasn’t happy to share USB with my DAW (Sonar), so I had to close Sonar first, send the changes to the keyboard, then restart Sonar. That would be particularly annoying if you happened to be working on a DAW project that took a long time to load up, and very time consuming if you need to repeatedly make adjustments in the Editor and check what effect they’re having.

Given the limited controls, a good number of options are available. The fader, mod wheel, buttons and the three footswitches can all be configured to send a wide variety of messages ranging from notes, CCs, program changes and MMC commands. The message types available are appropriate to which controller you’re editing, so obviously you can’t assign the fader to send program changes (imagine trying to do that accurately!). Minimum and maximum values can also be specified for continuous controller values. The three footswitches can also be assigned to various functions, bearing in mind that the Exp (expression) is designed for continuous footpedals, and the Sustain and FS2 are for momentary footswitches. It should be noted that the fader, mod wheel and expression pedal can all be assigned to send Aftertouch messages — the keyboard itself is sensitive only to velocity.

Here, the keyboard is split into four non-overlapping zones, each transmitting on different MIDI channels. Zones 3 and 4 are also transposed downwards by one and two octaves respectively.

As well as playing a single instrument across the full key range, the keyboard can be split into up to four Zones, each of which can transmit on separate MIDI channels, with its own octave and transpose settings. Zones can of course overlap each other to create layered sounds. The settings you make can be saved to file, thus a library of presets for different applications can be stored for future recall.

From within the Editor, seven key velocity curves are available to suit your playing style: Hard, Soft 1, Soft 2 and Linear are the four continuous curves, along with three fixed values of 64, 100 and 127. Being normally used to a 76-note semi-weighted keyboard, I personally found the Linear curve to be the most comfortable; its velocity response is smooth and comfortably controllable across the range, although I found accurately homing in on low values between one and 30 difficult to achieve predictably. The maximum of 127, whilst achievable, does require a little extra determination (see box).

As to the physical feel, it’s light enough to play fast, yet weighty enough to feel satisfying. Fast(ish) single-note repetitions are performable up to a certain speed, beyond that the keys can struggle to return quickly enough. The keys themselves have a smooth, shiny playing surface, which could make them potentially more slippery in sweaty conditions. A non-slip, faux ivory finish or even a simulated escapement action would have been nice, but such luxuries would no doubt have pushed the price up considerably. Nevertheless, the quality of this keyboard subjectively feels at least on a par with those on other more expensive instruments.

I found the Hammer 88 playing experience enjoyable, with a pleasing action that belies its low price. It won’t be of interest to MIDI power-users, but then that’s not its target market. It should appeal to computer-based pianists and those who primarily play piano, but make occasional forays into other MIDI instruments, or live players who want to dedicate one keyboard to play piano-oriented sounds. It would also make an excellent auxiliary keyboard for anyone who uses a shorter-scale synth controller as their main input device, but feels the lack of weighted keys and the full length scale. It also gives easier access to those awkwardly located sample library keyswitches, which always seem to be lurking well out of the range of a shorter keyboard!

There’s not a huge choice generally in 88-note weighted controllers, most being in the upper price echelons, so at around £380$400 the Hammer88 has precious little competition. Its closest rival is the Studiologic SL88 Studio Keyboard Controller, offering onboard programming, aftertouch and three programmable X-Y joysticks, it would appear to be the only other 88-note weighted controller in this price range. Aside from this, and notably cheaper, are the Nektar Impact LX88 and the M-Audio Keystation 88, but these are both semi-weighted keyboards.

To get an idea of the kind of values generated by each velocity curve, I examined MIDI recordings of my playing performed with what is for me and weighted keys, a normal amount of physical effort. This may of course differ wildly from anyone else’s definition of ‘normal effort’! These were the results:

It may not bristle with MIDI control options, but if you’re looking for a decent 88-note weighted keyboard for piano-oriented duties and don’t want to break the bank, the Hammer 88 is a quality bit of kit for the money.