M-Audio's latest foray into the mic market combines a striking retro look with the warmth of a valve and the versatility of switchable polar patterns.

Built in the same major Chinese factory that manufactures Groove Tubes microphones, M-Audio's Sputnik is a multi-pattern, large-diaphragm tube microphone that offers elegant retro styling and very solid construction. There's no Russian background that I can discern, despite the name!

The Sputnik is designed around a one-inch diameter, centre-terminated, dual-diaphragm capsule that utilises a three-micron thick, gold-evaporated mylar membrane. It's all housed in a body whose main parts are made from brass, finished in polished nickel. The tube used for amplification is wired as a triode and looks like the same type of miniature ex-military tube (6205M) used by Groove Tubes in their tube models, so perhaps there's some design connection there. The 6205Ms are all pre-tested and selected prior to use.

Internally, the construction of the mic is very tidy, with the tube fixed horizontally to the circuit board. The tube itself has wire ends and is soldered directly to the board, like any other component, which makes it slightly more difficult to change, should that ever become necessary, but also avoids the problems that can occur with sockets, such as noise due to corroded pins. A transformer provides a balanced output at the correct impedance, and pattern switching is internal to the microphone itself rather than integrated into the power supply, as is often the case with multi-pattern mics. The three patterns on offer are, as you might expect, cardioid, figure-of-eight and omni. There's a bit of a thump if you change patterns with the mic powered up, and also a metallic 'ting' that sounds like the tube filaments vibrating for a second or so, after which the performance settles down to normal. Two further switches on the mic engage a low-cut filter and a 10dB pad.

The housing design doesn't look typically Chinese, although the internal construction style seems more familiar, with two supporting rails running the length of the microphone to hold the circuit board and capsule. The use of a bright-plated, machined-brass body shell, in combination with the rounded top cover and a heavy, turned retaining ring, gives the microphone a look that is both retro and distinctive, an impression that is further reinforced by the large, disc-shaped capsule basket. A dual-layer steel grille protects and screens the capsule, which is shockmounted.

A seven-pin cable connects the microphone to the included PSU, and from there a standard three-pin XLR connector takes the signal to your mixer, preamp or audio interface's microphone input. All the microphone's power requirements are provided by the PSU box, so phantom power is not necessary, although if your mixer applies phantom power globally to all your microphone inputs this won't cause the Sputnik any problems. Mains power for the PSU comes in via an IEC mains socket with a toggle-type mains switch and a large red power-indicator lamp. There's no external mains voltage selector, but a jumper connector inside the box allows for 240V, 120V or 100V operation. 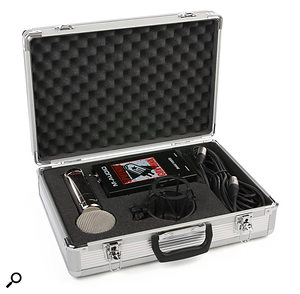 Included in the kit is the necessary seven-pin XLR cable, to connect the mic to the PSU, and a tough metal shockmount that mates with the threads at the bottom of the microphone, to hold it securely in any position. Also supplied are a cloth bag to protect the microphone and an aluminium camera case to contain the whole package.

The Sound Of Sputnik

A look at the paper specifications for the microphone reveals that its response is much flatter than that of many large-diaphragm models, with just a hint of a presence peak, most pronounced in omni mode, right up above 12kHz. Because the frequency response is specified as 20Hz to 20kHz within +/- 1.5dB, M-Audio claim that individual Sputniks are closely matched enough to be used as matched pairs in stereo recording. The mic's sensitivity, of 30mV/Pa, is pretty typical for a large-diaphragm tube design, as is Equivalent Input Noise (EIN), at 18dBA. Maximum SPL (Sound Pressure Level) handling is 132dB, rising to 142dB with the pad in, and the low-cut filter, when active, brings in a 12dB/octave roll-off at 80Hz.

M-Audio say their aim with Sputnik is to straddle the areas covered by tube classics such as the Neumann U47 and the AKG C12, which suggests that they're going for natural warmth combined with smooth highs. They go on to explain in their documentation that it isn't just the fact that tubes overload gracefully that makes tube gear sound good. More importantly, tubes can deliver more gain at lower distortion levels and using less negative feedback than typical solid-state circuitry, which results in a more accurate transient response. This makes perfect sense, as none of the classic tube mics was built to add intentional distortion — they were all designed for as low a level of distortion as possible using the technology of the time.

Clearly, the main application of the Sputnik is as a vocal mic, and because of its relatively flat response it is more likely to work well with a wide range of vocal styles than a mic that's been 'tricked up' to sound good for one specific application. In cardioid mode, the sound is clean and full, with the proximity effect working nicely at close range to bring up the lower regions of the male voice, for that 'Midnight Radio DJ' growl. The high end is smooth but in no way dull, and overall I get the sense of a good tonal balance capable of flattering a voice without messing up its inherent character. At 90 degrees off-axis, the sound becomes very thin, which means that muddying influences coming in from the sides will be rejected very effectively, although the rear rejection seems to discriminate against high frequencies more effectively than low ones. This is true of most cardioid-pattern mics.

The Sputnik's tonality remains reasonably consistent through the figure-of-eight and omni patterns, and although the omni performance is compromised slightly by the solid basket-surround ring there should be no problem using omni mode, providing you don't point the side of the mic directly at the sound source. In normal studio use, noise isn't an issue. The Sputnik needs to be used with a pop shield but it seems a little better without one than many mics I've tried.

Overall, I think this mic embodies most of the desirable characteristics of a classic tube model, without the attendant purchase or servicing costs. There are subjective variations between every make and model of microphone, but the Sputnik manages to strike a good balance between flattery and apparent tonal neutrality. Given the current competition in the microphone market, the Sputnik certainly isn't the only option out there in its price range, but my experience with it makes me want to try it on more sessions to see what it can really do. A great performer and a good looker.

Other multi-pattern valve-mic choices in this price range include Rode's K2 (£469), which has continuously variable polar patterns from omni through cardioid to figure-of-eight and was voted best studio microphone of 2004 at the Frankfurt Musikmesse. SE's Z5600a (£399) is also a contender, with a total of nine polar patterns available, and is the cheapest of the options listed here. If you find the look of the Sputnik attractive, you might also want to check out the retro-styled Sontronics Helios, again with continuously variable patterns, costing £450.

The Sputnik sets out to deliver classic tube mic performance at an affordable price and goes a long way towards achieving that aim. It also looks distinctive and comes with a shockmount and case.