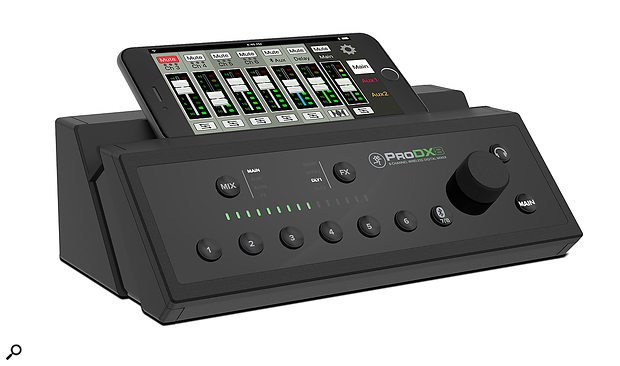 Mackie’s ProDX series of wireless mixers inherits much of the technology developed for the earlier, and larger, DL range. For example, the MixConnect software that controls the ProDX range follows the same paradigm, albeit simplified, as the Master Fader software used with the DLM mixers. It is also very similar to the software used to control the Mackie Freeplay portable PA. One big difference, however, is that the ProDX mixers are designed either for self-op use or use in small venues, as evidenced by the fact that the wireless control is via Bluetooth rather than Wi-Fi, which reduces the working range somewhat. Basic mixer operation can also be achieved using the front-panel buttons and data dial.

Both Android and iOS versions of the MixConnect control software are free to download, and both tablets and phones are supported, though iOS 8.0 or later is required, which means my iPhone 4 doesn’t qualify. However, I can still stream music to the mixer via Bluetooth from my iPhone. All my MixConnect tests were done using my iPad 3.

The ProDX8 is the larger of the two mixers in the series (the other being the ProDX4), and it has six ‘combi’ XLR/jack inputs, which can accept mic- or line-level sources, plus a further stereo channel (7/8), which can accommodate either Bluetooth audio streaming or a stereo line-level signal via a mini-jack socket (which overrides the Bluetooth source). There are balanced jack outputs for the main PA, plus two pre-fader aux outputs (the ProDX4 has only one aux), used to feed independent monitor mixes. All of these outputs have their own seven-band graphic equaliser covering the 125Hz to 8kHz range. Other connections include a rear-panel mini-jack for headphones, and a mini USB port for loading updates.

Each channel has a three-band EQ with a sweepable mid, a variable low-cut filter, and sliders for dialling in compression and reverb. Other than the amount, the compressor parameters are preset, while the reverb may be selected from one of 16 types (the ‘reverb’ presets also include delays and reverb/delay combinations, plus a couple of chorus options). Note that there are no pan controls — only channels 7/8 and any relevant effects appear in stereo. There’s also no phantom power option. If the mixer is used without the MixConnect app, the choice of effects is limited to four. 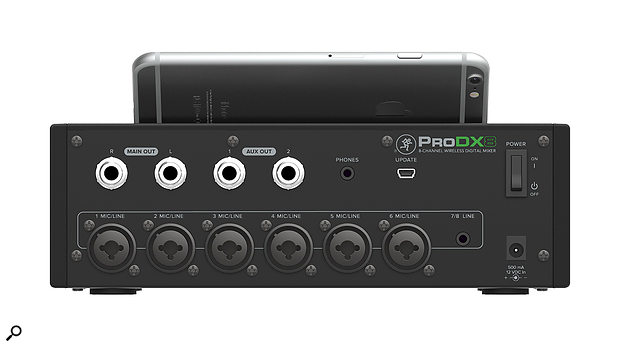 The ProDX8’s six ‘combi’ inputs can accept mic- or line-level signals, but no phantom power is provided.

In physical terms, the ProDX8, which weighs around 1kg, is quite compact, at 76 x 230 x 140mm. It is designed to be used on a desk or a stand, where the sloping front panel provides easy access to the controls. An angled, rubber-lined slot on the top allows an iPad or phone to be parked when not being used to control the mixer.

Alongside the audio connections on the rear panel is the input for the included external switch-mode, universal-voltage PSU (oh, for the old days when Greg Mackie was with the company, leading a crusade against what he called wall-warts). On the front panel are buttons for the six mono and one stereo channels. A Mix button steps through the outputs (main, aux 1 and aux 2) and the effects send, and in conjunction with the channel select buttons, allows all the necessary levels to be controlled using the data dial; the dial always adjusts whichever parameter has been selected. Over on the right are two buttons marked Main and Phones, which select those outputs for level adjustment. There’s a separate FX button to step around two preset reverb and two delay options, which is all you can directly access if not running MixConnect.

A 15-segment horizontal bar-graph shows the parameter level for a few seconds after adjustment has ceased. These bar-graph LEDs illuminate white when changing a value, and then revert to green after a few seconds to show the main output level. Further metering is available on the app screen, and the front-panel channel buttons flash red when the signal level is too high. There’s no input gain control on this mixer, so any excess levels must be controlled at source. Moderately loud singers should be OK, but a combination of exceptionally loud singer, close miking and a very sensitive mic could be an issue, in which case the only option is to back off the mic or buy an in-line pad.

Within the MixConnect control software, all the channel and effect faders show up in the main Mix view, with mute buttons above the fader and a control icon below, though you’ll need to swipe across the screen to see all of the inputs plus the delay channel, as only six faders plus the main fader can be seen at any one time. Three virtual LEDs above each fader give an indication of the input level. The main fader and the buttons for selecting the aux and effects faders are always on view at the right of the screen, regardless of what view page you are in. 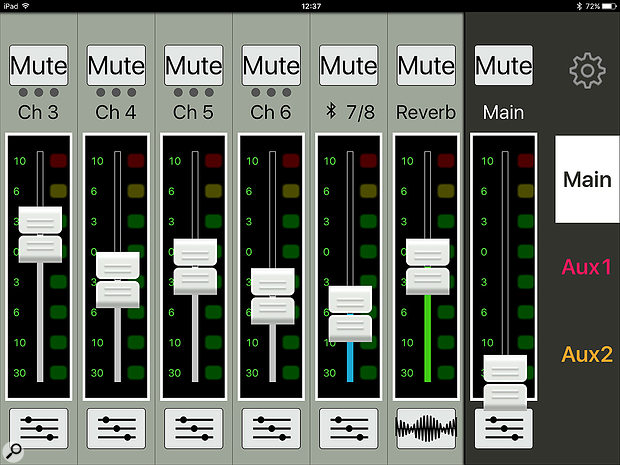 Touching a control icon (which looks like three horizontal faders) in a channel strip brings up the EQ, compression and effect sends for that channel. Three virtual LEDs show the compressor activity, and the three faders in the icon switch to being vertical, to show you that touching the icon again takes you back to the fader view. Arrow keys let you step through the channels without leaving the page. Touching the control icon in the main or or one of the aux strips brings up the graphic EQ, while touching below the effects fader takes you to a page showing 16 preset effects types, with the delay effect level on the left and the main fader on the right. Once the mixer is set up, it’s possible to turn off the remote device and to make any necessary ‘in flight’ changes from the front panel.

A settings icon gives access to the memory section of the mixer, where three presets can be saved and recalled. A preset captures all of the mixer settings... and that really is all there is to it! Operation is so simple and intuitive that you hardly need to look at the MixConnect manual.

Linking my iPad 3 up to the mixer to control it via Bluetooth was simple once I’d downloaded the free MixConnect app, and even on a phone, the faders were big enough to use comfortably. I found my way around the software in minutes and, as with Master Fader, you can’t move a fader by accident by running your hand across the screen — you have to touch a fader cap for half or second or so until it glows before it becomes active. Also, despite the size of the fader caps, you need to touch them pretty centrally to get them to activate.

Front-panel operation is reasonably fast and painless, though you can’t access the EQ or compressor settings without running the MixConnect software, and only four preset effect types are available — two reverbs and two delays, one of which is a rockabilly-type slap-back. I had to hold a mic right on my lips and shout to get the red overload LED to come on, so only particularly loud singers will need to back off the mic to keep the signal from clipping. 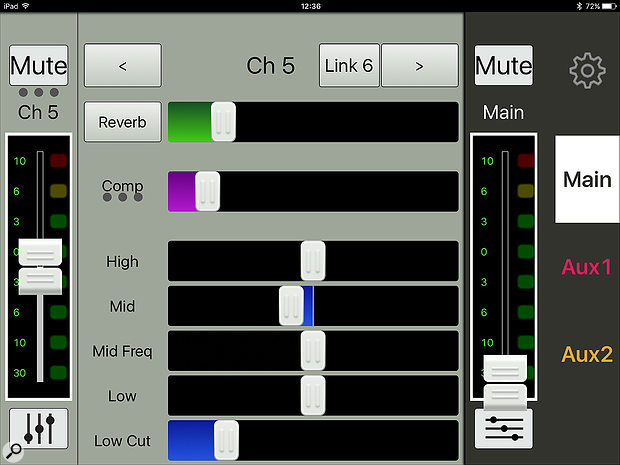 The channel settings page, in which EQ, compression and reverb amount can be adjusted.

Noise levels, though not exceptional, are adequately low: a dynamic range of 105dB is quoted, and during normal use I didn’t notice any noise. Conversion is 24-bit at 48kHz, giving a 20Hz to 20kHz response ±1dB, and all the outputs can send signal levels of up to +14dBu.

The EQ offers a sensible compromise between flexibility and complexity, with shelving bands at 12.5kHz (high) and 80Hz (low), plus a sweepable mid band (100Hz to 8kHz) on all the channels. The graphic EQs available on the outputs don’t really have the resolution for fixing specific resonances or feedback issues, but are effective for overall room EQ or speaker tuning.

Overall there’s very little to criticise, other than perhaps the lack of a tap-tempo button for the delays and, as with the larger DLM mixers, there’s no instant-access ‘effects defeat’ button — you have to navigate to the delay fader and then use its mute button. In my experience, a singer is likely to start talking to the audience again the second you’ve turned on the effects for the start of the next song, so being able to kill the effects in under half a second from whichever mixer screen you’re in seems to me to be pretty fundamental. Of course, if the mixer is being operated by the singer then this is less of an issue. However, given that the ProDX8 can be used in some capacity without a Bluetooth controlling device, I would have liked to find a physical effects-mute button or a footswitch socket on the mixer itself.

These omissions aside — and they certainly aren’t deal-breakers — the Mackie ProDX8 has a lot to offer as long as you don’t need phantom power for capacitor mics or active DI boxes. Don’t let the fact that it is a digital mixer with no hardware faders put you off, as it is very easy to use, the Bluetooth link (or mini-jack input if you need the MixConnect app open in front of you) may be used to stream backing tracks or interlude music alongside the mixer app, and you get decent effects plus a compressor on every channel. If Mackie should at some future date add an MP3 playlist function to the MixConnect app, it would save moving between apps to access the music player facility if you use backing tracks; as things stand, it is easier to connect a second phone or iPod via a cable for playing backing tracks.

Preset changes are very smooth, and though you can only store three different presets, that’s enough to produce a quick change between effect types or to switch to a different mic balance. Of course if you don’t need the presets, there are analogue mixers with built-in compressors, decent EQ, digital effects and even graphic EQs on the output, and they may do all you need for less money, so it all comes down to the way you like to work, and whether being able to control mix details from your phone during performance is important to you. If it is, then the ProDX8 is a very practical piece of kit, and though I’ve tried a number of different digital mixers, for me the Mackie models still win hands down in terms of user-friendliness.

I’m not aware of any competitors that come down to this price point, other than perhaps Behringer’s X-Air XR12.

Where only a few inputs are needed and control is to be from on or close to the stage, the ProDX8 is a very practical choice.