I'm often asked if I were on a desert island and could only pick one microphone from my collection, what microphone would I choose? I'd probably opt for the Microtech Gefell M930, which has been one of my favourite large-diaphragm cardioid capacitor mics since I reviewed it for SOS way back in January 2004. Almost a decade of experience has only reinforced my appreciation of this unassuming little mic, which has delivered spectacular results from anything and everything I have placed before it. 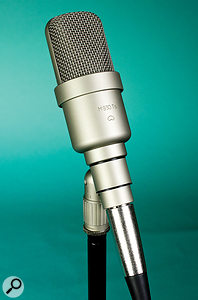 The new M930Ts model, reviewed here, looks identical to the original, but it's noticeably heavier and longer (at 273g and 130 x 45 mm, compared with the M930's svelte 210g and 118 x 45 mm). It's still pretty compact for a genuine large-diaphragm mic, though. The extended name explains the reason for the additional weight and length: 'Ts' is an abbreviation of Travosymetrierten Ausgang, which is German for 'output transformer'. In other words, what MG have produced here is a transformer-coupled version of the original M930.

The 28mm, gold-plated, polyester diaphragm within the elastic-mounted mic capsule has remained exactly the same (as has the wire-mesh grille surrounding it), but the impedance converter circuit has been modified to accommodate the specially designed transformer. The main benefits are a slightly greater LF extension (about 0.5dB attenuation at 40Hz, compared with the original's 2dB), the ability to drive very long cables without distortion, and a larger headroom margin, especially when working with high-impedance preamps.

Like its older sibling, the M930Ts has no switches for bass roll-off or pre-attenuation. Its massive maximum SPL rating makes pre-attenuation redundant, and the proximity effect is relatively modest and well controlled, negating the need for a bass roll-off facility. The M930Ts is supplied with a 'hard' mount, which slips over the XLR tube at the base of the mic. However, despite the internal capsule shock mount, this mic is as prone to mechanical vibration as its sibling and a proper external shockmount is a worthwhile purchase.

The Ts model has a fractionally higher sensitivity (23mV/PA, which is about 1dB louder than the original M930) and a lower output impedance (40Ω instead of 100Ω), but it also has a slightly higher self-noise. Using the modern A-weighted DIN standard to assess self-noise, the performance remains the same as the original (an impressively low 7dBA), but the alternative CCIR technique reveals a 5dB increase (18dB instead of 13dB). The A-weighted signal-to-noise ratio is the same, at 87dB, as is maximum SPL, which is a remarkable 142dB (for 0.5 percent THD), and dynamic range, at 135dB.

The transformer provides greater headroom, allowing the maximum output level to rise to 18dBu with a 1kΩ preamp input impedance, and a massive 21dBu for a 10kΩ input impedance (the corresponding M930 figures are 17 and 18 dBu). The down side is that the impedance converter electronics require almost twice as much current from the phantom power supply to drive the transformer, drawing a relatively hefty 6mA. Not surprisingly, the frequency and polar responses remain virtually the same between the two models, with only a slightly flatter response at the extreme LF to really differentiate the two.

One reason why I like the M930 so much, besides its excellent sound character and huge headroom, is the fact that it's so small, which makes it easy to place in awkwardly small spaces. It's also so light that it doesn't strain the boom arm clutches of mic stands at full stretch, and the satin-nickel (or dark bronze) finish helps it stay remarkably discreet. Although fractionally larger and heavier, the M930Ts retains those qualities, and it exhibits the same moderate 'presence peak', which amounts to about 3dB from 6-12 kHz. This sits in a higher part of the spectrum than the peak of many mics, and lends an open airiness to the sound character, which flatters without becoming irritating.

In direct listening comparisons with the original, the Ts version sounded very subtly richer, although this might be a misleading impression caused by it being a tad louder, and it is still fundamentally a very neutral and transparent mic with a naturally balanced spectrum. It boasts plenty of transient detail without being spitty or harsh, but has a full and extended bass response. The cardioid pickup pattern is very well controlled from about 200Hz up to 8kHz, above which it develops a bit of a rear hypercardioid tail, before becoming significantly narrower at extreme the HF end. Below about 100Hz, it starts to open out towards an omnidirectional response, as almost all phase-shift cardioid microphones do.

The M930Ts retains all of the attractive attributes of the original sylph-like M930, but there's no denying that this buxom new sister microphone catches the eye with its additional headroom, slightly more extended LF response, the ability to cope with seriously long mic cables without distortion, and a little transformer iron warmth. It's enough to cause a gentleman to stray from the path of righteousness! Hugh Robjohns