Microtech Gefell mics have long been revered for their sonic performance in the studio — so why not use them on stage too? 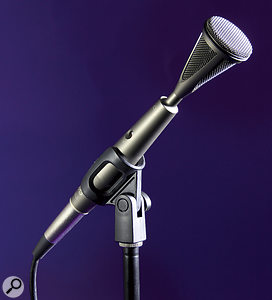 Microtech Gefell have built up an enviable reputation for the sound quality of their fine range of studio microphones, many of which have appeared in the pages of Sound On Sound over the years (reviews of the UM92, UM900, UM930, UMT70S, UMT800, M300, M1030 and my favourite, the M930, can all be found on our web site). Of these, the UM900 is probably the most unusually and distinctively styled, but the subject of this review — the M900 — raises the bar quite considerably.

Although best known for studio microphones, Microtech Gefell also make an interesting range of live-sound and installation models. The M900 comes from the former camp, being intended for close miking of instrumental soloists as well as for hand-held use by vocalists. However, its quirky styling will probably make most vocalists look rather perplexed as you hand it to them! This intriguing mic is available in two forms, the cardioid M900 and the hypercardioid M910, although the two look absolutely identical, with only a small polar-pattern logo etched into the body to reveal the difference.

This is a large-diaphragm mic with a diaphragm measuring 25mm in diameter, and I'm told the capsule is a ceramic unit based on that used in Geffel's PM860 mic from 1986. As with virtually all hand-held vocal mics, the M900 is an 'end-fire' design, meaning that you sing directly into the end of the mic along the axis of the body. The capsule is suspended within an inverted conical grille with three layers of wire mesh pop-shielding, plus a small metal plate suspended directly above the centre of the diaphragm. These multiple layers of progressively finer wire mesh are designed to ensure adequate wind-blast and pop suppression.

The conical capsule assembly terminates in a short stalk connecting to the top of the body, which has a varying diameter designed to fit comfortably in the hand. The overall dimensions of the M900 are 218mm in length and 47mm across the top of the capsule, while the maximum body diameter is 28mm. The mic weighs 229 grams and is finished in a dark bronze.

A small elliptical opening part way down the body provides access to a pair of DIP switches, which introduce a 10dB pre-attenuator and a 90Hz high-pass filter to compensate for the proximity effect when the mic is placed close to the source (less than eight inches away). The impedance-conversion electronics provide an active, balanced output without using a transformer, and rely on standard phantom power, drawing a very modest 3mA. The maximum sound pressure level for 0.5 percent THD is 133dB (143dB with the pad switched in), and the self-noise is given as 13dB (A-weighted). The M900's sensitivity is given as 17mV/Pa, which is fairly typical for a capacitor mic.

The frequency response is extremely controlled, remaining well within 2dB from 40Hz up to 3.5kHz. Above this, a broad presence peak boosts the high end, reaching a maximum of +4dB between about 8 and 10 kHz, and returning to unity by 16kHz. At 20kHz, this is 8dB down. The polar pattern is a fairly tight cardioid below about 2kHz, although it develops a small hypercardioid tail up to about 8kHz, before the polar response narrows noticeably with higher frequencies.

First, let me dispatch my only serious whinge! The M900 ships in a lovely foam-lined wooden box, but without even a simple mic-stand mount, let alone an elastic suspension. A simple MKV8 adaptor clamp is available as an accessory for about £15 in the UK, while the optional elastic shockmount costs around £150. It seems more than a little mean to not even include the simple stand adaptor with a microphone costing over a grand!

Moving on to happier things, while it may be a challenge getting some vocalists to feel comfortable with the strange styling of the M900, they'll have no trouble at all appreciating the sound quality of this mic. It boasts a sublime, airy sound, with a very smooth but detailed high end and an unusually well-extended bass response. Overall, it sounds very natural and uncoloured, but with clear diction and a slightly larger-than-life aspect to it. Handling noise and plosive popping are both extremely well suppressed, especially with the high-pass filter engaged, and the smooth, well-controlled frequency response and tight cardioid pattern make it relatively immune to unexpected PA and monitor howl-rounds.

Given its very linear and extended frequency response, plus a very mild presence lift, the M900 can also be used as a spot or accent mic for a wide range of instruments. In this role I found it compared extremely well with the small-diaphragm mics I'd normally use, such as the Neumann KM84 or KM184. In fact, it excelled generally, managing to deliver a very attractive and usable sound regardless of the source. I tried it on guitar amps, percussion, clarinet and violin, and it performed very well on all of them. The only negative aspect, really, is the size, it being both broader in diameter and longer than many mics intended for close instrumental work.

There is no doubt that the M900 is a very nice-sounding vocal mic, for live work or studio recording, and its unique styling will definitely help artists grab some attention! However, it also excels as an all-rounder instrumental mic if you can cope with the relatively bulky format. The M900 is well worth auditioning if you're in the market for a high-end, all-purpose microphone.

The market for high-end stage capacitor mics is relatively uncrowded, but the Earthworks SR40V is a contender.

A uniquely styled end-fire, large-diaphragm capacitor mic intended for live stage vocalists and instrument accent mic duties, but equally at home in the studio as a genuine all-rounder.