At nearly twice the price of a Neumann U87, you've every right to expect this to be a very, very nice microphone...

Back in SOS January 2004, I reviewed the Microtech Gefell M930 large-diaphragm cardioid studio microphone, and was very impressed. However, there are times when it's useful to have something other than a cardioid mic, and the versatility of a good multi-pattern mic cannot be ignored. So the launch of the new UM930 intrigued me. 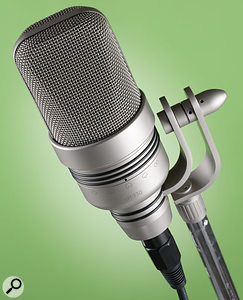 The UM930 is designed for the full range of studio and broadcast applications, including spoken voice, singing vocalists, and countless instrumental duties such as recording acoustic guitars and keyboards, percussion, wind and string instruments — and so on.

Usefully, the side-address UM930 incorporates a discreet, green LED behind the grille on the on-axis side of the mic, along with the model number and polar-pattern symbols. The manufacturer's logo is etched onto the rear of the mic (and many people actually rig MG mics to face the wrong way because of that!).

Although sharing a similar model number to the M930, and appearing to have the same sort of grille and body proportions in the advertising photographs, the UM930 is positively elephantine in comparison. Whereas the M930 is roughly 120mm long and 45mm in diameter, the UM930 is roughly 40 percent bigger in all dimensions. It measures some 158mm long, is 65mm in diameter, and weighs a very chunky 930g (compared with the M930's delicate 210g).

Gefell's clever optical DC-converter technology from the M930 is used in the new mic too, and its technical specifications are very similar, with the same low self-noise of 7dBA, the same maximum SPL of 142dB (for 0.5 percent distortion), and fractionally lower sensitivity, at 20mV/Pa. Standard phantom power is required, of course, from which the mic draws 4.5mA.

Available in either satin-nickel or dark-bronze finishes, the review UM930 was equipped with an integral, dual-axis 'elastic suspension'. However, a more conventional cradle shockmount is also available, as is a simple, single-axis microphone bracket. Whichever support is chosen, the mic is supplied in a traditional wooden box.

There are three versions of this mic: the Studio Condenser, and the Soundcheck Tool and Twin versions. The Soundcheck Tool (SCT) sends a 1kHz test signal down the cable if the polar-pattern switch is left midway between any two positions for more than about five seconds. The test-tone generator emits tone equivalent to a sound pressure level of 74dBA (20dB below the reference standard of 1 Pascal). The other model (the UM930 Twin) provides two simultaneous outputs. This mic is fitted with a five-pin XLR instead of the standard three-pin type, and it provides a fixed cardioid pattern on one output and the normal switched-pattern output on the other, thus allowing the user more flexibility in comparing polar patterns when recording. Another useful feature (on all models) is that the black rings around the pattern selector can be replaced with one or more coloured O-rings to aid identification. Green, red and blue rings are available.

The mic feels very robust, solid and — dare I say it — expensive. The polar-pattern switch is nicely weighted and detented for a smooth, positive action, and the sealed reed-relays used to change patterns should give a lifetime of reliable service. The output mutes for a few seconds when switching patterns (and the green LED turns off), to allow the electronics to stabilise, after which the LED illuminates again.

The published polar patterns are all fairly tidy and consistent up to about 8kHz — but above about 12kHz they collapse towards a narrow figure-of-eight response (as with most dual-diaphragm mics). All patterns have a broad 4dB presence peak centred at about 12kHz, but as the patterns become more directional the frequency response tilts more strongly up towards the HF. The 5kHz point is only 2dB higher than the 50Hz point for the omni pattern, but it's 4dB for the cardioid, and almost 8dB for the figure-of-eight pattern. The proximity effect counteracts this in most applications, however, and the rising response is not as obvious in use as the various plots suggest. The broad presence peak is nicely judged to give clarity and air without exposing sibilance.

In cardioid mode the sound is very similar to the M930, and the character is clean and reasonably neutral. I acquired some lovely recordings, ranging from male vocal to solo cello and silver cornet, and the mic's size and styling impressed the vocalist enormously!

Sonically, I can't fault the UM930, but I feel its price is a concern — even if you don't opt for the 24-carat gold version (yes, really!) — given that it is almost double that of the industry-standard Neumann U87ai, and over three times that of the fixed-pattern M930. The UM930 offers far more versatility and easily outperforms the U87 technically, but even so I think many will struggle to justify the cost.

High-end multi-pattern mics abound, but the standard has always been the Neumann U87. For similar money, the Brauner Phantom V is an interesting alternative, and Neumann's TLM170R is a firm favourite. The AKG C12VR is in the same cost ball-park as the UM930, as is Gefell's switchable-pattern valve mic, the UM900, and — for ultimate pattern versatility — so too is the Soundfield SPS422.

A beautifully produced, multi-pattern, solid-state, large-diaphragm mic with a relatively neutral and accurate character and impressive technical specs. Only its cost counts against it.