We put MXL's Genesis through its paces alongside a much pricier model, to find out just how good a tube mic can be at this price.

MXL's Genesis is a visually imposing tube microphone with a narrow cardioid pattern and — on paper, at least — a nominally flat response. This is slightly unusual, because most large‑diaphragm mics have a noticeable presence peak. Examination of the polar pattern shows that the mic is slightly sensitive to sounds coming from directly behind it, which indicates that the capsule design veers somewhat towards the hypercardioid pattern.

The Genesis is positioned towards the top end of the MXL range (only the multi‑pattern Revelation costs more) and uses a NOS (New Old Stock) Mullard 12AT7 tube, powered by an external supply unit (110/220V AC, 50‑60Hz), the latter being small but very solid. The mic itself is quite large, at 59mm in diameter and 240mm in length; it's not dissimilar in this respect to a Neumann U47. Like the PSU, the microphone body is finished in red, but the mic grille is gold‑plated — and I'll leave it up to you to decide whether or not this is tasteful!

A 150Hz, 6dB/octave low‑cut filter switch is located on the mic body, along with a 10dB pad switch. In addition to the aforementioned power supply and a 15‑foot, seven‑pin Mogami connecting cable, the mic comes with a 15‑foot Mogami three‑pin XLR mic cable, a robust elastic cradle‑type shockmount, a cleaning cloth and a curved, gold‑plated pop screen that clips onto the mic body. A further, rigid stand‑clip is included, and this attaches to the threaded outer section of the XLR housing. While the mic has its own plush‑lined wooden box, the accessories are all neatly packed in separate cardboard boxes, although I doubt many will use these for long-term storage: perhaps this is one instance where an aluminium case would have made good sense.

Removing the threaded ring from the base of the mic gives access to the innards, supported on the type of metal frame that's common in Chinese‑built microphones. Most of the circuitry, other than the switches, is mounted on a single circuit board populated by good‑quality but non‑esoteric components. Interestingly, whereas most tube mics have a transformer output stage, this US‑originated design appears to be a hybrid, with three further solid‑state devices but no output transformer. Everything is very neatly assembled. The 12AT7 tube fits into a ceramic base, and is firmly clamped by a metal hoop, lined with heat‑resistant silicon rubber. Electrolytic capacitors connected to the tube circuit are rated at 250V, which suggests that the tube is run at a suitably high voltage.

The 32mm‑diameter capsule is based around a six‑micron, gold‑sputtered membrane, and manages a 20Hz to 20kHz response within 3dB — although the mid‑range isn't entirely flat, with shallow dips of a couple of dB evident around 250Hz and 3kHz. I don't know if this is coincidental, but the dips occur at those parts of the spectrum that can make material sound boxy (250Hz) and harsh (3kHz), so their inclusion may have been a deliberate attempt to sweeten the mid-range in a subtle way. The 18dB (A‑weighted) self‑noise figure isn't particularly low, but it's typical of many tube microphones and should be no cause for concern in the majority of close‑miking applications. With the pad switched in, the mic can handle levels up to 140dB (at 0.5 percent total harmonic distortion). MXL claim the Genesis is suitable not only for vocals, but also for use with many instruments, including piano, drums (overheads) and percussion. 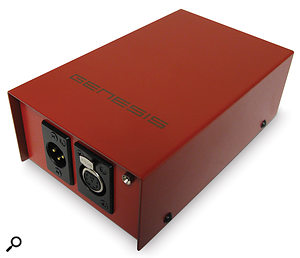 There's no mistaking the Genesis power supply, which is coloured to match the mic!

In all my tests, the MXL Genesis sounded very much like a slightly brighter version of my own Rode K2 tube mic, which is in itself an excellent tube mic at a slightly lower price point, but we also compared it with a rather more expensive AKG C12VR, which we've decided to use as our reference tube mic.

The Genesis delivers a natural‑sounding vocal that balances low‑end warmth with clarity, while adding a little welcome density to the voice. As ever, different mics suit different voices, but a little gentle EQ should fit this mic to most male voices. In this instance, Hugh Robjohns preferred what the C12VR did to his voice a little more, but for me the Genesis worked better, with less chesty muddiness and a hint more detail. As you'll see in the vocal mic article elsewhere in this issue, female voices tend to be more tricky to match to microphones, so as we keep stressing, with any vocalist, it's important to try different mics to see what works best.

Acoustic guitar came across with a good tonal balance, the sound giving the impression of being slightly compressed. There was enough zing from the strings, but the result was never 'scratchy'. However, as always, I had to hunt for the sweet spot for the mic in relation to the instrument, rather than relying on textbook positioning. By comparison, the C12VR, again, sounded somewhat 'chesty'.

Hand‑percussion tests proved the Genesis to be equally capable in that application. The results were articulate and detailed, but still conveyed adequate depth. In this test, both the C12VR and the Genesis delivered a slightly different tonality, but both worked really well.

Electric guitar combo with distorted guitar is a challenging test: few capacitor mics I've tried (with the notable exception of the Audio Technica 4050) excel in this application. With no EQ, and with a mic placement of 30mm or so from the grill, pointing midway between the centre and edge of the speaker cone, the sound came across as slightly aggressive, but still very usable. By experimenting with mic distance and keeping the mic close to the edge of the speaker, rather than aiming it at the centre, we achieved good results that only needed a little taming with EQ. You could also rotate the mic slightly to take the sound a little way off-axis, which invariably shaves off some of the high end. Clean electric guitar translated well, given care with placement and EQ.

Having a near‑flat response makes the Genesis more versatile than a mic designed to exhibit deliberate coloration, and while it sounds more 'airy' than my Rode K2, which I also dug out, and less 'chesty' than the C12VR, that doesn't make any of them bad mics: it just underlines their different personalities. It's also likely that the transformerless output stage of the Genesis is more transparent to transients than the usual tube‑mic output transformer, which may account for the slight sense of brightness, even though the response curve shows no obvious presence lift. These characteristics should also work in the mic's favour when working on piano and drums, where a clean but unhyped transient response is important.

The Genesis is predictably good‑sounding as a vocal mic (with the caveat, of course, that you need to check that it suits your voice), but its lack of obvious coloration and capable handling of transients also makes it a natural for acoustic guitar and percussion. It worked adequately as a guitar‑amp mic, a trick that few capacitor mics can pull off effectively, and while most people would choose the Genesis primarily as a vocal mic, it's also a good choice for the musician who needs one good tube mic that can be used for just about anything, but without spending silly money. In fact, I'd have to say that it's a steal at this price in the USA. I'm still not sure about the bling factor, though!

The clear alternatives in this price range are the Rode K2, the AKG Perception 820 and the SE Z5600A, though you don't have to look far to find similar models from other companies such as M-Audio and Studio Projects. All have their merits, so, as ever, it comes down to choosing the one that suits your taste.

As described in the main body of this review, we've started a new testing procedure for our mic reviews, whereby we run through a series of standard tests with the review mic alongside a more established mic (in this case, the AKG C12 VR). We've placed some short audio examples from these tests on the SOS web site at /sos/jul10/articles/mxlgenesisaudio.htm so that you can hear the results for yourself. Bear in mind that this is not a scientific comparison of the mics in question: they're for tonal comparison only, as they were not recorded under 'quiet room' conditions, and how good the mic sounds will always vary from one sound source to another. However, you should be able to get some appreciation of the overall sound character of the mics. Vocal tests were done using spoken word, which can be very revealing of a mic's character. Distances were set to minimise proximity effect and the mics were arranged as close to each other as physically possible, though some small variation due to mic position is inevitable.

The Genesis is a very capable, mid‑priced tube mic that can handle most studio tasks well but is particularly good as a vocal mic. It would also look good in pairs hanging off the front of a pimp's limo in the 1981 film Escape From New York!