If you're looking for classic ribbon‑mic warmth and smoothness on the tightest of budgets, this mic may be for you... 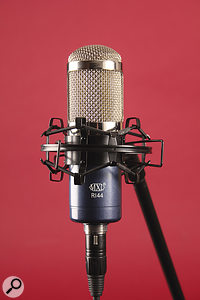 Although its casework looks very similar to that of many side‑address capacitor microphones, the MXL R144 is a ribbon microphone, and despite the fact that it's one of the least costly ribbon mics currently available, it comes complete with a shockmount and cleaning cloth, in a practical plastic storage case with a sculpted foam interior.

The R144's passive design comprises the ribbon capsule and an output transformer. The ribbon itself is made of aluminium, and is 47mm in length and only 1.8 microns in thickness. The frequency‑response plot bears more than a passing resemblance to the profile of the Malvern Hills as seen from the M5 motorway, but the useful frequency range extends from 20Hz to 17kHz, with broad peaks at around 300Hz and 6kHz. Few people buy ribbon mics for their sonic accuracy, but rather because of their subjective tonality — and in particular their warmth and ability to smooth out high‑end detail in sound sources that might normally seem strident when miked with capacitor microphones.

Being a straightforward ribbon mic, the polar pattern is fixed at figure‑of‑eight, and because ribbon mics aren't particularly sensitive (in this case ‑56dB, where 0dB=1V/Pa), unless the sound source is reasonably loud, this mic is best used with a good-quality mic preamp that's capable of low‑noise operation.

The R144 can withstand SPLs in excess of 130dB, which means that it should be fine for use on electric guitar amplifiers and as a drum overhead, and of course it is suitable for voice, where a mellifluous ribbon tonality is often sought. Ribbon mics are also very popular for use with bowed strings, as they can tame much of the harshness that often results from close‑miking these instruments.

The R144's shiny chrome basket contrasts with the bluish-purple paint finish of its cylindrical body, which measures 47 x 171 mm overall and weighs 400g. The front, or in‑phase, side of the microphone is indicated by the MXL logo and the numeral 8 and, as with all figure‑of‑eight mics, there's almost total rejection of sounds coming from 90 degrees off‑axis (in other words, the sides of the mic). Phantom power is not required, and indeed is not recommended, as many ribbon mics can sustain damage if plugged into or unplugged from a phantom-powered connection with the power on. (Applying phantom power is sometimes unavoidable if it's switched globally on a desk, but if the ribbon mic is connected via a properly balanced cable, this shouldn't be a problem, as long as the power is off when the mic is plugged or unplugged.) MXL mics are produced by the same company that markets Mogami cables, so it's no surprise that they recommend using the mic with a good quality XLR cable — and ideally one of theirs!

The MXL shockmount grips the mic using a rubber‑lined spring sleeve, opened via a couple of wire levers. The suspension elements are the usual nylon‑covered elastic bands. In general, ribbon mics are the most fragile of all microphone types, so care must be taken to avoid dropping or exposure to strong blasts of air. It's wise to use a pop shield with most ribbon mics, even when recording sources other than vocals, and precautions should be taken to avoid letting dust or, worse, iron filings, into the basket. Placing a plastic bag over the mic between sessions and putting it away when not in use is the safest option. Damage to the ribbon is not covered by the warranty, and there is a charge for a replacement — but, to be fair, the whole mic costs less than the ribbon replacement charge for most ribbon mics!

Despite the extended high‑end response (at least as far as typical ribbons are concerned), my initial voice test confirmed the R144 to have the very typical syrupy top end of a ribbon, which, although it may not suit most lead vocalists (other than those going for a deliberate 'crooner' or prohibition‑era light‑jazz vibe without resorting to EQ), could be useful to place backing vocals behind a lead vocal. However, the mic does respond well to EQ and I managed to get it sounding very close to a Coles 4038, with which I compared it, by boosting the highs and taming the lows. (Some low cut is often needed with ribbon mics, as their figure‑of‑eight pattern has the most pronounced proximity bass-boost effect of all the patterns.) Interestingly, the R144 was slightly less sensitive than the Coles mic, which itself is known to have a fairly low sensitivity, so for vocal recording you need to have a mic amp that behaves well at close to its maximum gain.

The R144's tonality — which seems almost identical for the front and rear of the mic — is well‑suited to smoothing out the high end of bowed strings and the fizzy edge of some guitar amps. My test with a guitar amp easily delivered very usable results, especially for capturing a fluid blues tone. With a bit of presence boost and low cut, you're ready for raunchy rock or gritty metal, and though the high end had a distinctly different colour to that of the Coles (which is nominally flat up to 17kHz), I rather liked it from a musical viewpoint.

The Coles initially trounced the MXL when recording hand percussion and acoustic guitar, where it produced a good representation of the sound with no real need to EQ, though a little careful EQ tweaking of the R144 was again able to get the sound much closer to that of the Coles. The R144 needed some low cut and some boosting in the upper-mid range to capture something close to the tonality of the instrument as heard in the room.

Ribbon mics are definitely not the best choice for every sound source, but once you have one or two good capacitor mics to take care of routine work, adding a ribbon model to your collection really expands your tonal palette. This model may fall at the lower end of the price scale, but it performs well on guitar amps, it is ideal for polishing the rough edges off bowed strings and it has some potentially useful vocal applications too. Provided your mic amp is reasonably quiet, the extended high‑end response of this mic means that the top end responds well to EQ, and that you're therefore not limited to a creamy sound. At the price, the R144 really is something of a bargain, and it would be a great introduction to using ribbon mics in the studio.

Similarly‑priced alternatives are available from companies such as Golden Age and Shiny Box, to name but a couple. However, in my experience, different ribbon models, especially at the entry‑level end of the price range, all have individual tonal characters, so if you have the opportunity to do so, it pays to try a few to see which you prefer.

As part of the review process, I recorded a few audio examples using the R144 alongside the Coles 4038 ribbon for comparison. You can find them on the SOS web site at /sos/may11/articles/mxlr144media.htm.

You can learn a lot from experimenting with a ribbon mic, and the R144 is one of the most affordable places to start.