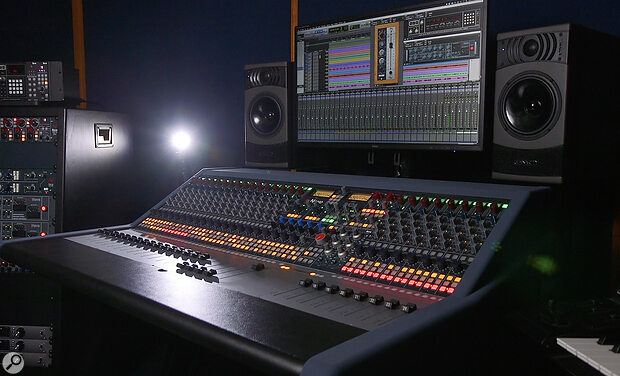 Have Neve succeeded in creating a compact desktop mixer with large-format console functionality?

Neve's announcement of their 8424 console met with some very mixed reactions from the online audio community. Some got and even loved the idea, whereas others seemed totally bemused. I realise it won't be everyone's cup of tea, but I think the armchair detractors have rather missed the point. Although the price tag makes for a great headline ("A 24-channel Neve for half the price!"), this isn't really a £20k$25k mixing desk at all. Rather, it's the 'engine room' of a £$50k+ large-format console, with some of the more underused parts stripped away. This brings down the production cost and thus the asking price. It also shrinks the mixer's footprint, and puts every control within easy reach. Of course, there being only a couple of mic amps and a handful of shelving EQs, it also means that to make use of it you'll need either to own or to budget for plenty of external gear too.

The idea is that you can 'drop' the 8424 into pretty much any studio, without duplicating the preamps and EQs many potential customers already own. Just hook the various D‑subs and handful of jacks and XLRs up to your patchbay and you're good to go. It's a strong concept, and though Neve are not the first to manufacture a console that relies on external mic preamps and EQ, I can't think of anything that's directly comparable.

The big-console feel is very obvious when you first sit in front of the thing. The physical construction exudes an air of precision, and the brightness of the backlit switches is beautifully judged: always visible, never a distraction. The master section is in the middle, where you want it. A number of tiny holes offer screwdriver access to trimpots to set things like the outgoing and return talkback levels and the return talkback compressor's threshold. The end cheeks are removable, specifically to enable the user to commission matching furniture. 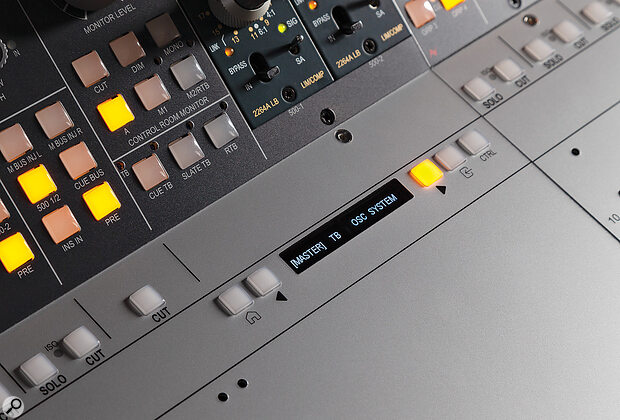 The tiny Global Services Screen sits beneath the master section. Though tiny, the display is clear and easy to read. Its main function is to provide information for the recall system, though you can access and edit lots of other detailed settings here. Full details are, of course, provided in the manual.

Then there's Neve's elegant, effective, semi-automatic recall system, which allows you to store and recall 99 profiles. Every gain position and switch status can be recalled almost instantly, globally or on individual channels. A tiny but easily read Global Services screen assists the user in manual recall of the few controls that aren't digitally controlled (and provides access to a host of more mundane configuration options). That process takes a little longer, but I was still surprised by the ease and swiftness with which I could perform a full, precise console recall — it's literally a couple of minutes' work. Pretty much the only things that aren't recallable are the recording input trims and the controls of units in the two 500-series slots.

By the time you read this there'll also be the cost upgrade option of motorised faders and a plug‑in to save recall settings in your DAW session. Based on the larger Genesys console's motorised fader system, Neve say they're looking at whether this system can be improved upon further. At least the 24 channel faders, but probably the group and master ones too, will be able to control the console's channel levels, to write/read DAW automation data (for automation and recall of the console's faders), or to control your DAW's faders using the HUI protocol. This could make the 8424 of real interest to multipurpose, multi-user studios, such as in universities, or to anyone needing to work on multiple projects simultaneously.

The channels are made in banks of eight, but if a fault were to develop on one channel, it doesn't mean all eight will be out of action, as a drop-in replacement bank can be sent out before you send back the faulty one for repair. Having observed Neve's manufacturing process, though, I'm confident that serious faults should be rare: Neve take a real 'belt and braces' approach to quality assurance, right down to X-raying every solder joint, in an attempt to ensure they identify the sort of minute, hairline faults that inspection by eye and measurement cannot detect. Everything is made in...