Designer Robin Porter (who's been with Neve since the '70s, and was involved in the development of George Martin's famous AIR Montserrat console) explained to me that he'd observed many people working on larger consoles who were barely using the channel EQs: typically, they'd tweak a channel or two, but leave the rest untouched. They might also opt to use different-sounding outboard EQs.

When you consider what a single-channel Neve EQ costs, that's a lot of investment lying dormant, so the decision was taken that the 8424 would rely on insert processors for the channel EQs, and only include shelving EQs on the groups (±12dB) and master bus (±15dB). Those shelves sound lovely, and joining the EQ on the master channel is a stereo width knob, as found on various other Neve consoles. This uses M‑S to set the image continuously from mono (fully anticlockwise) to standard stereo at the 12 o'clock position. Turn it further and it manipulates the Sides component to enhance the impression of width. 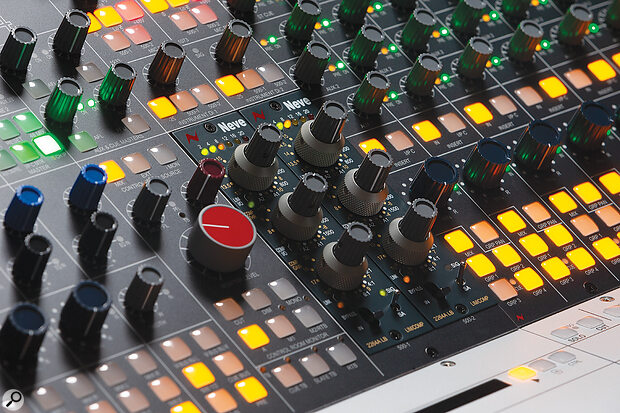 Modules hosted in the two 500-series slots can be used as inserts for the 1073 preamps.

Of course, the two 500-series slots could also be populated with 'deployable' EQs. These slots' I/O can again be accessed from the rear panel, and the output can be routed internally to the groups, though they can't be used as inserts on the main input channels without external cabling. Even on a console with as many routing options as this, I guess you have to draw the line somewhere.

Why only two slots? Neve were keen to point out to me that they never set out to design a large-scale 500-series host like, say, the SSL XL-Desk, or API's various consoles. Partly, that's because they wanted it to appeal equally to heavy users of rackmount gear, and partly because offering sufficient slots for a 24/48-channel console would mean a lot of potentially redundant space — and probably a bigger, less ergonomically friendly console. They have a point. After all, it's easy enough to add as many rackmount 500-series chassis nearby as you need, and two slots is enough to host a pair of Neve's EQs or compressors. That said, it might have been nice had there been two more slots, so as to cater for a full stereo channel strip (preamp to EQ to compressor), or both a preamp/EQ strip and a stereo bus compressor, putting all those controls within easy reach.

Despite the scarcity of onboard preamps and EQ, the 8424 is hugely impressive. It is so incredibly flexible, and just brimming over with large-console facilities. The features and options which will be added imminently (remote control of the 1073OPX, and the fader-automation/DAW control system) should make it truly outstanding. This being Neve, of course, it's not all about facilities: the excellent sound quality is a given too. It's a wonderfully clean and clear-sounding console, with just a subtle touch of richness from the mix-bus output transformers, and there's more warmth to be had if you want it, courtesy of the two 1073 preamps.

So what's not to like? As I said, it would have been nice to be able to route the DI inputs through the onboard 1073s without relying on a patchbay or cables, and a couple more 500-series slots might have made sense — could they perhaps replace the built-in 1073s with such slots, as these could still host Neve's 1073LB preamps? My biggest gripe is that I'd have preferred there to be more subgroups, or that the four existing ones were stereo, as I tend to use EQ and compression on groups a fair bit (eg. one for drums, one for vox, one for guitars, and one for something else). None of these would be deal-breakers for most people, though, and other than this, it's all good. Exceptionally good, in fact.

Of course, you pay for this sort of quality and versatility, and for most of us running even well-specified home studios, the 8424 is likely to be something we can only aspire to. It's competitively priced for a Neve but, in terms of potential customers, there's some overlap with more inexpensive products, such as API's The Box 2 and a handful of other 500-series-host mixers, from the likes of Looptrotter, Ocean Audio and Purple Audio. Yet, while these may be more affordable, they lack many of the 8424's big-console features. SSL's Matrix 2 and XL-Desk arguably offer more overlap but, still, neither comes close to doing everything the 8424 can, and nor do more traditional consoles in this price bracket, such as Audient's ASP8024 HE or the Trident 78.

In fact, to find any analogue mixer that gives you this combination of sound quality and functionality, you'd have to consider something like a 24-channel Neve Genesys or SSL AWS console, and even factoring in the cost of preamps and EQs, the 8424 is significantly less pricey than those. It really is in a class of its own.

As well as the various global function switches I've already discussed, the master section features traditional music-studio control-room functionality. There are three stereo monitor outputs, and the second and third can be calibrated using a screwdriver preset to match the first. A continuous monitor level knob is joined by: level controls for the AFL/PFL bus; a Dim facility; a talkback dim trimpot (to set the level of the rest of the cue mix when the talkback or return talkback mics are used); a Mono button (mono over both speakers); a control room source selector (post-fader mix, external stereo input, and that under-armrest 3.5mm TRS jack input); and monitor selection buttons.

The main channel peak-reading meters are eight-stage LEDs, and reflect the level on the currently selected input (A or B). Alternatively, they can be switched to monitor input C. Above the master section are two backlit VU meters, which are assignable to various different sources, including the main mix, the individual subgroups, and the aux and reverb returns. Interestingly, the 8424 also features a metering signal output, allowing you to hook up your preferred external meter — a detail the larger Genesys console lacks.

The 8424 itself was initially a one-size-fits-all affair — though the new motorised fader option changes that. It can also be factory fitted with two Neve 500-series modules, and the remote-controllable 1073OPX preamps can be bundled with it, at a significant discount. The table below shows some of the main options. (Since most prospective purchasers will be VAT registered, prices exclude VAT.)

For details on pricing of other accessories, such as optional stand, dust covers and speaker shelves, visit www.ams-neve.com.

As you'd expect of a Neve console, the 8424's published specifications are extremely good. The maximum output levels vary slightly for different outputs, but is never less than +27dBu (for 0.5 percent THD+N), and in some cases almost 2dB higher. The bandwidth is within ±0.1dB from 20Hz to 20kHz across all outputs, and THD+N at the nominal operating level is below 0.005 percent. The system noise floor again varies for different outputs, but at the main stereo mix output it is -85dBu (20Hz-20kHz filtered) for a single channel routed to the mix bus, rising to around -80dBu with 24 channels routed. The Group and Aux outputs are two or three dB quieter, thanks to the simpler signal path.

Crosstalk is better than -100dBu at 1kHz both between adjacent channels and between the mix buses. As might be expected of the 1073 preamps, which are deliberately provided for their character rather than for ultra-low-noise transparency, the EIN figure is a few dB higher than more modern preamps at -125dBu (150Ω termination, 60dB gain, and 20Hz-20kHz filter). Hugh Robjohns

The 8424 delivers Neve's large-format console sound and facilities in a much more compact desktop format. While most users will need to use external mic preamps and EQ, it really is in a class of its own.