These little mixers could provide the ideal starting point for would-be computer musicians — and at this price, what's not to like? 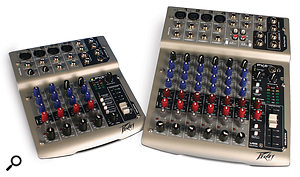 Peavey's PV6 and PV8 mixers have been updated to include a two‑channel, 16-bit, 48kHz USB audio interface. What's more, they're available at a price that's accessible even if you're just starting out with home recording — so I was keen to see if they really do offer a complete system at a bargain price.

The update follows the same lines as the original (which I liked): a metal case, a curved, overhanging front edge, raised connector section, coloured knobs and clear legending; and all the connectors, other than the two‑track input and output RCA phonos, the USB connector and the power adaptor input, are neatly arranged on the top panel.

In terms of its feature set, this is really a very typical small mixer — but considering that you can find it for under £100$170 on the street, its specification is surprisingly good: there's a generous +22dB maximum output, three bands of fixed-frequency EQ (±15dB) and quiet electronics. The manual quotes an EIN (equivalent input noise) of ‑129dBu and a frequency response of 14Hz‑25kHz (+0dB/‑1dB). The EQ has centre‑detented controls and appears on all channels, as do a pre‑fade monitor send and a post‑fade effects send. Both sends have corresponding output level controls in the master section. All four monitor channels have pan controls, whereas the two stereo channels are fitted with balance controls — but every channel has a rotary level control and a gain trim, the latter being located at the top of each channel strip.

You can't expect such sophistications as PFL, phase inversion, pad or low‑cut filters on a mixer of this size and price, but Peavey have included a global 80Hz low‑cut filter in the master section, and there's an individual overload LED for each channel. They've also kept the global contour switch of the original, which adds a hint of mid‑cut 'smile' curve (I'd be inclined to set this to flat when recording).

The master section houses the switches for phantom power (this is recessed to prevent accidental operation), Tape/USB to Control Room (and to headphones), Tape/USB to Mix, Contour and the low-cut filter. A stereo effect return is provided on jacks, and this has its own return-level control, placed to the left of that for the headphones. Finally, a single 60mm stereo fader governs the overall level, and there's a stereo, six‑LED output-level meter.

Connections for the main stereo out, the control‑room output and the two aux sends are on impedance-balanced connections that accept balanced or unbalanced cables. This common approach to balancing reduces the risk of ground-loop hum.

The main stereo mix is routed to the USB audio output, in addition to the usual main and control room outputs, and the USB return comes back to the same point as the Tape Return. According to the manual, depressing the Tape/USB Mon switch adds the tape return to the Control Room and Headphone outputs for zero-latency monitoring — but the switch seemed to operate as a simple changeover, so that the control-room outs followed either the mix or the Tape/USB return, but not both at the same time. This is how I'd normally expect a 'Tape In' switch to operate, but it meant that I couldn't set up zero‑latency source monitoring from this button. I found that the Tape/USB to Mix switch added the USB signal to the main output rather than replacing it, so in a live situation you could use this to add computer audio to a mix.

Another minor error in the manual is the claim that the 'to DAW' record level via USB can be adjusted using the Record Level control next to the USB port: I could find no Record Level Control, so, unless Peavey's Stealth technology is even more impressive than their audio expertise, I suspect the design was finalised after the manual had been written!

The rear panel of the larger PV8 USB mixer: the rear of the PV6 USB is almost identical.

The PV6 USB offers a similar, if reduced, feature set in a smaller footprint. There are two mono mic/line, and two switchable stereo-line/mono-mic channels. No inserts are provided, but on the first two channels the space has been put to good use by moving the gain trims to save on panel space below. The EQ remains three‑band on the mono channels, but is two‑band on the stereo channels, and the pre‑fade monitor send has been dropped, along with the send master controls. However, the PV6 retains the master‑section switching options of its larger sibling, and uses the same quality of circuitry — so the design isn't as limiting as you might expect, especially when you consider that you can pay as much, or more, for a basic stereo USB interface with only one or two mic amps.

Neither mixer requires drivers for Mac or PC, as they're recognised as class‑compliant USB devices. The manual comes on a CD, though, and the disc includes Cockos' Reaper DAW software, as well as a demo version of Peavey's excellent Revalver guitar‑amp simulation — so if you have a computer, you have everything you need to start recording.

Both mixers perform well from a technical standpoint, with adequate headroom, low noise and low distortion. Fixed-frequency, three‑band equalisers are always a bit of a compromise, and the manual doesn't even tell you at what frequencies they operate, but in practice I found the EQ perfectly adequate for general tonal balancing. A quick check with some white noise and a spectrum analyser revealed the mid control to operate somewhere around 500Hz (useful for taking out low-mid muddiness) but the high and low shelving EQs were more difficult to pinpoint: they're somewhere in the region of 8kHz and 80Hz respectively.

In my experience, USB interfaces can sometimes be plagued by low‑level digital whining noises when used with some computers. With my Mac Powerbook, turning the headphone level more than around halfway up (the control setting for a given level will vary depending on your headphones' impedance) revealed just such a noise, and it didn't go away when I switched the computer to battery power, to rule out ground loops as the cause of the problem. Although the noise was a minor source of annoyance when monitoring, when recording or mixing the whine was barely audible, and didn't seem to be added to any audio files that I recorded or bounced — and in this respect these mixers are no worse than many other USB interfaces. In all other respects, the audio quality was remarkably clean, with very low noise, even when recording quiet speech.

The no‑fuss USB interface makes this series ideal for basic desktop-recording applications, provided you don't need to record more than two audio streams at a time, and I was impressed by the robust build quality and clear panel layout. It's easy to find points to criticise, but both mixers perform better than you'd expect given the price, and the five‑year manufacturer's warranty provides some peace of mind, too.

Small mixers with USB or Firewire connections are becoming increasingly common, so check out Mackie, Phonic and Behringer (Behringer often include a basic external USB interface with their mixers).

At this price, there's really nothing not to like!