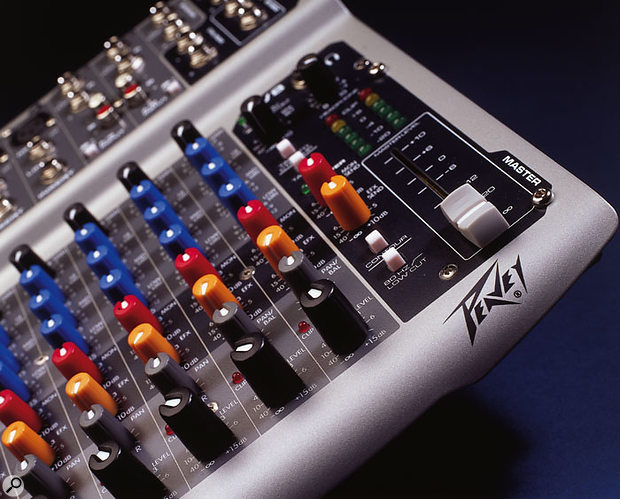 Peavey still tend to be pigeonholed by some as a guitar company, but for many years they've also been in the business of building mixers and PA components. They even had a decent range of synths on their books at one time. Based in Meridian, in the south of the US, Peavey still manufacture a significant part of their inventory in America, but like many other MI companies they've been pushed into moving to 'off-shore' manufacturing for some of their more cost-effective products. The PV mixer range is designed in the US, but built in China, which means the end user gets a good design at an affordable price.

The little PV8 is well suited to some desktop recording applications, as it features four very respectable mic preamp channels with global phantom power, plus two further stereo line-only channels. Cosmetically, it looks a little different to the competition, with its curved, overhanging top plate, brightly coloured knobs, and distinctive screening. Straightaway I felt that it looked attractive and clearly laid out, with all the connectors (other than the two-track input and output phonos) on the top panel for easy access. Although there's nothing radically unusual about this mixer, it is simple, quiet, and has a lot of headroom (+22dB maximum output) for a product of its type. The manual is concise and clear, though it omits to tell us at what frequencies the EQ controls operate, and it claims the mid-band EQ has a shelving characteristic, which I find most unlikely. It does however tell us that the EQ has a ±15dB gain range.

Powered via an included AC adaptor, the Peavey PV8 mixer offers four mono mic/line channels and two stereo line-only channels. Both the mono and stereo channels have three-band EQ, and the stereo channels have both jack and phono inputs with a button to select between them. All four mic channels have insert points on TRS jacks, as well as line inputs on balanced jacks. While you wouldn't expect phase inversion, pad, or low-cut filter on a mixer of this type, there is a global 80Hz low-cut filter that could be very useful, especially in live situations. There's also a global contour switch to add a bit of a 'smile' curve (somewhat like a hi-fi loudness button) to the sound, and while this might not be much use for recording, it can sometimes be useful when using the mixer live, especially to make recorded background music sound more punchy. All channels have input gain trims and a pair of sends, one pre-fade for monitoring and one post-fade for effects — unlike some compact mixers, the sends have corresponding output level controls in the master section.

Rotary pan/balance and level controls complete the complement of channel knobs, though there is also an individual overload LED for each channel. It's worth mentioning that while the knobs may look like chewy sweets, they're actually made from hard plastic and have a clearly defined pointer line on top.

There's no EQ bypass switch, but all the EQ controls have a centre detent. However, on the review sample — apparently a pre-production model — the detents varied in feel so much that some were very obvious while others felt almost non-existent. Hopefully this will be cleared up for the main production run, and it was the only mechanical problem I encountered. 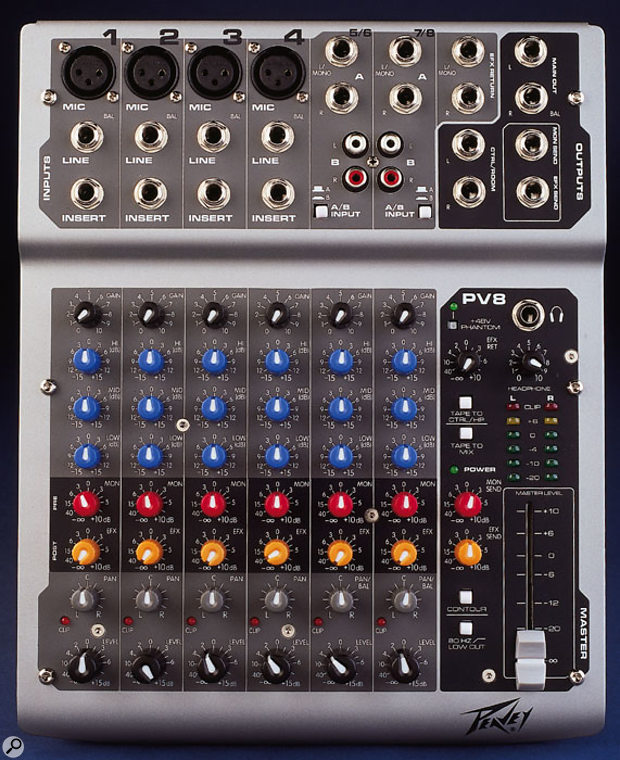 The master section is simple enough, with global phantom-power switching, master level controls for both the effects return and monitor output (a headphone jack is located above the phones control), and a single slider to control the main stereo output level. There are physical outputs for the main stereo out, the control-room output, and the two aux sends — all on unbalanced, ground-compensated jacks, which help to avoid ground-loop hum — plus there are the stereo aux return jacks. Six-section LED meters monitor the stereo output level.

The two aux send master knobs are colour matched to the channel send controls, and there are switches to send the tape to the control room output and/or to the mix output. Unfortunately, there seems to be no way to select the two-track input as the only monitor source, which means that you can't do the old computer studio trick where you monitor the soundcard output via the two-track return while recording into the computer from the main stereo outs.

This little mixer checks out well in all respects, with low noise, generous headroom, and a clear layout. The manual quotes an EIN figure of -129dBu with a 150Ω input load and a frequency response of 14Hz-25kHz (+0dB/-1dB). It's also worth mentioning that the mid-band EQ sounds as though it's set at around 500Hz rather than the usual 2.5kHz, which I feel is a worthwhile departure from tradition. A lot of the unpleasant boxiness in sounds happens at around 500Hz, so it's useful to have a tool that allows you to cut that. I find that recessing the phantom-power button is a bit of a mixed blessing, as it's almost impossible to turn it on or off unless you're armed with a matchstick or a ball-point pen. It certainly means that you won't switch it on by accident, but come on guys — it's only phantom power, not the president's big red button!

I like this little mixer a lot and it has some nice practical touches, such as the use of a fader for the master level control and a sensible choice of EQ mid-band frequency. Whether it is the one for you or not depends largely on whether you need the ability to select the two-track input as the sole control-room monitor source. As a cheap source of decent mic preamps (which you can take directly from the insert sends) or as a means of combining a small number of mics, line-level signals, and DI-box outputs, the Peavey PV8 offers a great deal of performance, not to mention a certain amount of visual flair, for the price.

As a problem-solver for your toolbox, a simple mixer to go with your recording setup, or a live mixer for duos and discos, the Peavey PV8 has much to commend it.