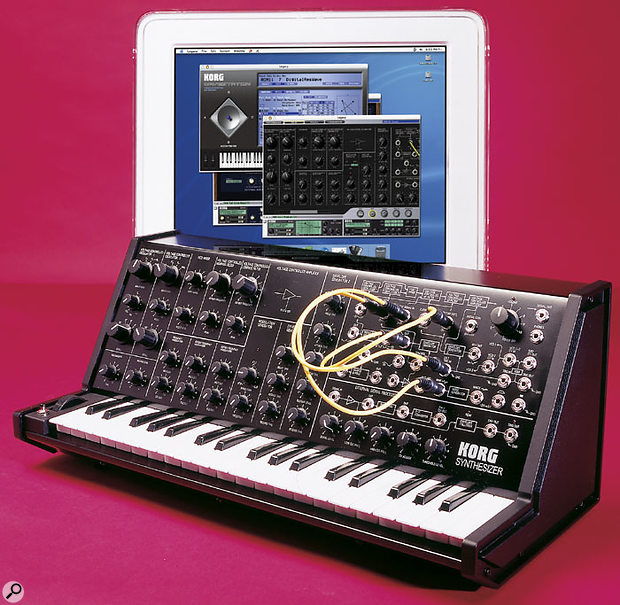 Korg's Legacy Collection recreates some of their best-loved keyboards in software form. It wasn't finished as we went to press at the end of March, but we managed to get this sneak preview as the final touches were being applied...

Few software synth bundles have created as much advance interest as Korg's Legacy Collection, and though it still wasn't ready to ship at the time of this preview, it was clearly very close and worked well enough for me to form a few impressions. Perhaps one of the reasons for the intense interest in the Legacy Collection is that Korg are modelling their own vintage instruments, but a major contributing factor has to be the highly cute bundled hardware controller, which comprises an 84-percent 'scale model' of the Korg MS20 monosynth, complete with working keyboard, controls and patchbay. This controller connects to the host computer via USB, though it doesn't have to be connected for the software to run. When it's finished, the Legacy Collection will be useable as 'stand-alone' applications, or as Direct X, VST or Audio Units plug-ins, but only for computers running Mac OS X or Windows XP.

What's In The Legacy?

Legacy comprises three instruments plus Legacy Cell, a kind of super virtual instrument that can be made by using one or two synths plus both insert and master effects. In all, 19 different effects types are available and include all the usual modulation effects, delay and reverb, plus a few slightly quirkier offerings, with 127 onboard factory presets based on these effects. All the effects are fully editable and there's an impressive bank of Cell presets that produce very rich, analogue polysynth-style sounds.

Two of the included synths model old analogue keyboards, the MS20 monosynth and the Korg Polysix, a fairly simple but rich-sounding six-voice analogue machine with an onboard arpeggiator. I'm told that Legacy came about because a group of Korg designers had a fascination for creating software models of their favourite old instruments, which is probably why the end result is so authentic; Korg have used what they call Component Modelling Technology to recreate the sound and behaviour of the original instruments by modelling individual components. This is more processor-intensive than the alternative method of modelling the approximate behaviour of blocks of circuitry, but it does get a lot closer to the original sound. The only departure from authenticity is that both instruments may be used polyphonically with up to 32 voices (or 16 voices in unison), though you can restrict the voice count to lower numbers if you wish. One surprising result of this added capability is that the MS20 software becomes a real monster in polyphonic mode. If I had to compare it to anything, I'd say the poly MS20 sounded pretty close to an old Oberheim.

Legacy Cell can create more complex layered and/or effected sounds using these analogue models either singly, in pairs or by using one of each. Both synths come with their original factory sounds, and of course you can store as many of your own sounds as you like, as well as creating new Legacy Cell patches.

For me, the third instrument in the collection is the real prize — the much-loved Korg Wavestation. The Wavestation was an ambitious wave sequencing instrument that suffered from the limited processing power available at the time of its inception, which meant that although it was technically multitimbral, it really only had enough polyphony to be used as a single instrument if complex sounds were being used. It also had onboard effects that had to be deployed in a compromised fashion in multitimbral mode. Legacy models the original Wavestation and its effects exactly, including, apparently, some small design flaws that contributed to its unique sound. In this respect, Korg had the advantage that some of the original engineers were available to help out with the software. It contains the same wavetables as the original, and comes with all 550 preset performances found in the Wavestation SR. What's more, SysEx dumps of existing Wavestation patches can be imported. As on the original, the polyphony is limited to 32 oscillators (which equates to between one and 32 voices depending on the complexity of the Performance), but as the Multi mode has been dropped (it makes no sense in a software environment where you can open as many tracks of each instrument as you like), each instance has full polyphony rather than all the parts having to share.

We've come to expect software instruments with photo-realistic front panels, and the Legacy instruments are no exception, but all three instruments can also be controlled via the hardware controller. Obviously MS20 maps to the controller exactly; the patchbay, assignable wheel and assignable button work just as they did originally. Even the external input for filter and envelope processing has been recreated (though signals go in and out via your own audio interface rather than the jacks on the controller). The settings of Polysix and Wavestation can also be adjusted via the MS20 USB controller, but the controller mapping is inevitably a compromise and sometimes you just have to turn a knob to see what it controls. When the controller is being used to control MS20, inserting any of the included patch cables into the front panel jacks causes a duplicate cable to appear on-screen, though you can simply drag the virtual cables around to create connections if real cables are too untidy for you. 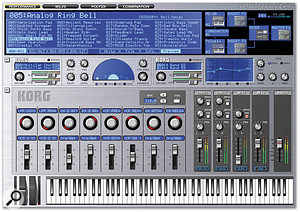 Legacy Cell.Photo: Original Mark EwingIn creating the hardware controller, the designers have been real sticklers for authenticity, but in some ways they may have gone too far, as there's only one control wheel, assignable to pitch-bend or mod depth — but no way to control both at once. Having said that, I guess most users will already have a full-size controller keyboard with the necessary levers or wheels somewhere in their studio.

Both of the 'analogue' instruments can be edited perfectly adequately via the on-screen representations of their front panels, as the originals came from the era when there was one knob or switch for each function. Wavestation is a different case, though. The original hardware keyboard was a menu-driven digital instrument that was notoriously hard to program, so there was little sense in recreating that interface. Instead, Korg have produced a dedicated graphical editor that makes creating new wavetables or patches very easy. Wave sequences can be set up using draggable envelopes for duration, amplitude and crossfade rate, but as with the original Wavestation, you need to be aware that changing an existing wave sequence will in effect edit every preset that uses the wave sequence. Because the Wavestation was a digital instrument, and because Korg still have the code for the original hardware version, the task of recreating the sound was perhaps easier (and less processor intensive) than modelling the apparently simpler analogue machines.

It's strange how instruments which are now regarded as classics never seemed quite so classic at the time (with the possible exception of the Minimoog). The MS20 always struck me as the budget choice for the player who really wanted a Minimoog but didn't have the money, but when you revisit these early Korg analogue synths, you realise that they had very rich, fruity-sounding filters and they were capable of some great sounds. Making the MS20 software polyphonic has really raised its game and it stands up well alongside some of the classic analogue polysynths, but things notch up another gear when you use Legacy Cell to either layer two together or to layer MS20 and Polysix, both with independent insert effects plus overall master effects. Some of the presets show off these hybrid instruments very effectively, and the end result often seems to be far greater than the sum of the parts. What's particularly impressive about Korg's modelling is the way the filters still sound analogue when the resonance is turned up close to self-oscillation.

I always had a soft spot for the original Polysix, because it sounded far richer than the simplicity of its synthesis engine should have ever allowed. I also liked its built-in arpeggiator and the fact that it had proper knobs to control everything. The character of the original has been captured superbly in this software version, and the only slight disappointment is that the provided presets cover only the original 32 factory sounds, leaving you to make up the rest.

As a current owner of three hardware Wavestations (two SRs and an AD), I was extremely keen to see if Legacy would allow me to move these to the 'store cupboard of eternal darkness' and replace them with their software counterparts, thereby eliminating hum and hiss from my studio as well as freeing up inputs on my system. What I heard from Legacy was in fact a revelation, because listening to those familiar Wavestation sounds played through a modern soundcard with decent converters and low-noise electronics was like peeling clingfilm from one of the great masterworks of art. Apparently the sample rate of the hardware Wavestation is only 32kHz, giving it an upper frequency limit of between 15 and 16kHz, but in the Legacy version, you can hear everything with a new clarity. Of course you could use the built-in top-cut filters to restore the 'warm', somewhat vague sound of the original, but I for one relish the chance to use these sounds in all their glory. This is one instance where the recreation is definitely better than the original! I also spent around an hour tinkering with the editor and found it really simple to modify patches. The same tweaks would have driven me to distraction if I'd had to do them via the SR's hardware interface.

During this preview, I was only able to use the instruments in stand-alone mode, but that was enough to convince me that I had to have one — for me, Legacy would be worth the money just for the Wavestation alone, even without the rather lovely hardware controller. I can't fault what Korg have done within their design brief, but sometimes you can be too purist. For example, I'd have liked the ability to choose a Wavestation preset as the oscillator for one of the analogue synths, which would more than make up for the fact that the Wavestation has no resonant filter of its own and that even envelope control is clumsy. Given that we now have very powerful computers, this type of mix-and-match approach should be technically possible. Perhaps these are options for future versions, but even as it stands, Legacy promises to set new standards in sonic authenticity and value. My credit card is primed and ready for the release version!

Look out for our full review of the completed Legacy Collection, which starts next month.