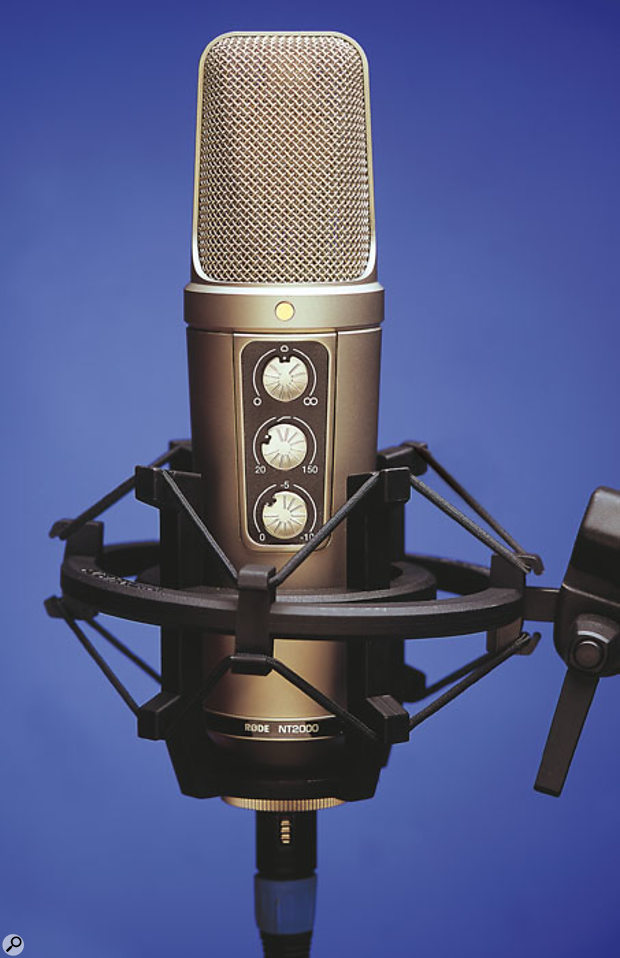 Two new large-diaphragm mics from Rode improve on their previous technology for a classy sound with exceptionally low noise.

Ever since the NT2, Rode have been stirring up the mic market, and their range now includes a variety of respectable valve and solid-state models priced for the project studio owner. It's been a while since the last time I reviewed anything from Rode — I looked at the NT4 and NT5 back in August 2002 — so when the NT2000 and NT1A turned up for review I was keen to see how their technology had advanced.

There's no mistaking the NT2000 — its distinctive three-dial control panel is quite unlike anything else on the market! This solid-state microphone uses a low-noise JFET design with bipolar transistor output buffers, so there's no transformer in the signal path. Rather than having switchable polar patterns, the uppermost knob allows the pattern to be varied continuously from omni, through the centre-detented cardioid position, to figure of eight. The mic can run from 24-48V phantom power.

The JFET preamp, which makes use of surfacemount technology, is extremely quiet, with just 7dBA equivalent input noise, and the mic's frequency graph shows a full 20Hz-20kHz frequency range with a gentle presence peak at around 12kHz. In cardioid mode there's also a lesser secondary presence lift at around 5kHz and, where the low end needs to be rolled off to compensate for the proximity effect (which affects cardioid and figure-of-eight patterns only), the centre knob is used to adjust the low-cut turnover frequency from 20Hz (effectively bypassed) to 150Hz. This 'continuously variable' theme also carries over to the pad knob, which goes from zero to 10dB of cut. With the pad switched out, the maximum SPL is an impressive 147dB, increasing to a massive 157dB with the pad in. Overall, the dynamic range of the mic is 136dB and the signal-to-noise ratio works out at a very healthy 84dB.

The mic is very solidly built and chunky, with a machined all-metal body finished in satin nickel plate. The controls make the body a little longer than usual, which in turn makes the mic quite weighty, so you'll need a good mic stand to avoid getting the droops! The capsule is protected and shielded by the usual dual mesh structure, and the capsule itself is shockmounted to further improve the isolation from stand-borne vibrations. A locking ring at the bottom secures the mic to the included SM2 shockmount, and the whole kit comes in a bespoke moulded plastic case. Dismantling the mic reveals a very tidy surfacemount circuit board with the Rode manufacturing logo, while the internal standard of metalwork finish is also good.

Rode's NT1A looks physically similar to the original NT1 — other than the finish, which is now satin nickel rather than grey lacquer. It is supplied in a cardboard box rather than a fancy case, and looks less macho than some of its competitors, but it comes with a good metal shockmount and a soft zip-up storage pouch. Like the original NT1, the NT1A is a cardioid-pattern, large-diaphragm capacitor mic with a gold-sputtered one-inch diaphragm. 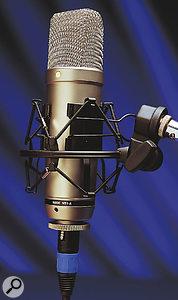 The Rode NT1A.Photo: Mark EwingDespite the similarities with its precursor, the NT1A is no minor update — the circuitry is completely new, and the capsule has a much-extended frequency response compared with the original, giving it full 20Hz-20kHz coverage. By contrast, the NT1 started to roll off above 16kHz. The response is also flatter than that of most large-diaphragm mics, as the presence peak is less pronounced and quite broad, but there's also a hint of low-end lift at around 120Hz, which gives the mic a very subtle 'smile EQ' characteristic, the practical outcome of which is that the sound is mildly flattering but still very natural sounding.

Transformerless JFET circuitry is used to amplify the signal from the capsule, and the circuit board employs surfacemount components. Niceties such as gold-plated XLR pins and a heavy machined locking ring for fixing the mic to the shockmount have been retained, even though this is still Rode's entry-level model. A very tough stainless-steel grill protects the capsule, with a second much finer layer beneath to help reduce popping and to help protect the capsule from contamination and RF interference. However, a separate pop shield is essential for studio vocal recording (as it is with all such microphones).

There are no pad or low-cut switches on the mic body, as this is the baby of the Rode range, but it's also amongst the quietest mics I've ever used, with an equivalent input noise of just 5dB, which translates to a signal-to-noise ratio of 88dB. By comparison, many large-diaphragm mics have a signal-to-noise ratio of between 75-80dB. The sensitivity of the mic is quoted as -31.9dB (with a 1V/Pa reference) and the sensitivity was subjectively very similar to other capacitor mics in my collection. The maximum SPL is 137dB, which is about as good as it gets for a capacitor mic with no pad switch, and the NT1A will work on 24-48V phantom power.

I tested both these mics side by side and found that the sound in cardioid mode was quite similar — there was a wonderful sense of high-end detail, but without the sound becoming thin or harsh. In fact I'd say both models produce what you'd expect from a well-designed transformerless FET mic, but with rather lower background noise than most of the competition. The somewhat constricted character that most cardioid mics exhibit to some degree seems less noticeable in these new Rode designs, but when you switch the NT2000 to its omni pattern, you quickly realise that omni-pattern mics still sound more open and natural than cardioids. The same is true of the figure-of-eight mode, which sounds very clean and pure.

Of course many people buy large-diaphragm mics because of their character, and some models have much more of a 'sound' than others. To me, these new Rode designs are characterised by a very open and detailed high end, which is nevertheless properly balanced by the low end. There's nothing thin or edgy about the sound and, because there's no excessive inherent coloration, they respond well to EQ — you're not constantly trying to fight the mic's in-built character. On most voices, the sound comes over as gently flattering and well focused, and of course this attribute bodes well when you come to mic acoustic guitars and other instruments.

I like the idea of the continually variable controls on the NT2000, the only slight downside being that settings become less repeatable if you pick up a session months after starting it. However, the manual does include a blank settings page you can photocopy to write down your custom settings. There's also a lot of practical advice in the manual about using the mic, including a reminder that you still need to buy a separate pop shield for studio vocal recording.

As an all-round instrument mic, the NT1A has a brighter, more articulate high end than the original NT1, but the low end remains well balanced, resulting in a clear, believable sound. However, I suspect most users will buy the NT1A predominantly for use as a vocal mic, where it delivers a very modern sound, balancing transparency and airiness with a supportive lower mid-range. There's certainly nothing budget or second class about the sound of this microphone, and where you do need to emulate the somewhat warmer, more middly sound of the original NT1, a little high-end EQ cut gets you pretty close.

From a practical viewpoint, the NT1A is a little lighter than many of its contemporaries, which makes mic-stand sag less of a problem, and the very low noise means it won't struggle when recording quieter instruments or when working at a moderate distance from the sound source. It's transparent high end also enables it to do a great job on acoustic guitar and hand percussion.

Rode's new designs have really increased expectations of what can be achieved in microphones at this UK price, particularly when it comes to circuit noise — they are typically 6-10dB quieter than most of the competition. You don't get the fudgy warmth of a tube mic or even a transformer-coupled model, but to my ears this makes it easier to place the vocals at the front of a mix without using excessive volume.

Despite its low cost, the NT1A delivers professional performance, both for vocal recording and for general instrument use. The lack of any heavy-handed presence boost makes the sound well suited for use with a range of singers and vocal styles and makes it's also easy to fine-tune using modest amounts of EQ. At the same time, the high end is as open and detailed as you could wish for, so if you like a vocal sound with a modern breathy quality, you can achieve it using little or no EQ.

If you need a good all-round, multi-pattern mic that will do justice to just about anything you ask of it, in addition to delivering pristine vocals, then the NT2000 is one mic you shouldn't miss checking out, but if you're one of the many people for whom a cardioid-only mic is perfectly adequate, then the cheaper Rode NT1A has a very similar character, with extended bandwidth, extremely low noise and a classy subjective sound.

The NT1A may have an entry-level price, but it's performance is anything but entry level. It has a great sound, it is extremely quiet and it comes with a good shockmount.