Having reinvented the 500-series rack with their Workhorse, Radial are now offering a smaller, more portable version... 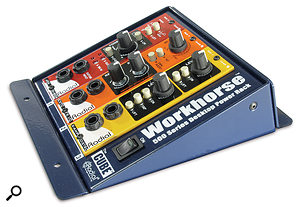 I often recommend that people looking to build up a collection of outboard gear look seriously at buying a 500-series rack. In some (not all) cases, going down this route will bring cost savings in comparison to buying the equivalent 19-inch rackmount processor, but it's also a very convenient format if you want to be able to take your modules on location, or want to have lots of controls within reach of the mix position, rather than having to reach across to a rack that puts you well out of the listening sweet-spot.

The 500-series format has been around for a while now, but we're just starting to see both manufacturers and the DIY community build upon the standard with new ideas. Radial came up with something rather special in their Workhorse rack units. Not only did these accept standard 500-series modules, but they introduced a novel routing system, allowing you to route directly from one module to another. They also added headphone amps and summing, not to mention useful practical features such as guide rails to help you mount the modules (something that can be a little awkward in some cases). You can read more about that in Hugh Robjohns' review back in SOS September 2011 (/sos/sep11/articles/radial-workhorse.htm).

Of course, not everyone requires the eight module spaces that the Workhorse offers. Neither does everyone require all of the extra bells and whistles, nor do they want to lug around a heavy rack when they want to take a few choice modules on location. If I've just described you, you probably won't want a Workhorse — but you might just be interested in Radial's Workhorse Cube.

So what is the Cube? Essentially, this is a cut-down version of the Workhorse. It's smaller in both size — it can host up to three single-unit modules, or one mono and one double-width module — and functionality. Gone is the headphone amp and the summing. Sadly, the guide rails have gone too, although this is less of an issue in a three-module rack. On the plus side, the innovative 'Feed' routing system remains, allowing you to pass the audio signal directly from one module to the next. Likewise, the Cube features the stereo Link function of the original Workhorse, as well as the Omniport, the idea of which is that a spare jack socket is made available for designers to take advantage of, whether for a key input, a DI input, or anything else they dream up. Also presented on the rear panel, as you'd expect, are the mic and line analogue I/O, with both an XLR and jack socket available for the input and the output.

Given the more modest demands of a three-module rack, the Cube's power supply offers only 500mV of current, compared with the Workhorse's 1200mV, but that's more than enough: it doesn't take a genius to work out that, on a per-module basis, there's more current available. Unlike the original Workhorse, the Cube's PSU is an external in-line one. Phantom power is available to all three module-slots, and is selected globally via a rear-panel switch. 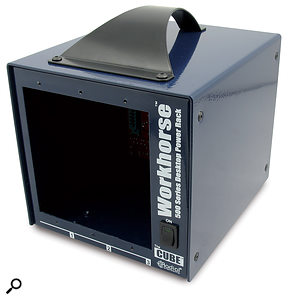 The Cube isn't just for desk mounting: its compact form should make it useful for location work. 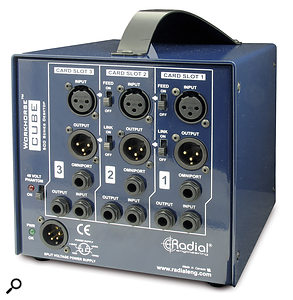 Like the Workhorse, the Cube feels solid and nicely built, with a luxurious, thick paint-job, and all the lettering is easy to read. I tried several modules in the Cube, including some DIY ones that may or may not conform to the VPR Alliance standards, and none caused problems.

The Feed routing facility might not be 'sexy', but it's genuinely useful, and makes me wish it had been incorporated into the 500-series standard from the word go! It allows you, for example, to build a three-module channel strip with mic pre, EQ and compressor, but only use a single cable in and another to come out. In other words, there's no messy patching required.

This routing feature currently works only with Radial's own modules, as far as I'm aware, although I can't see any reason why another manufacturer couldn't take advantage of the new standard. It's also worth me stating that there's nothing wrong with Radial's modules eithe. They offer a range that's both impressive and affordable, and we'll be reviewing some of them in the coming months.

Where the Cube really wins out, though, is in its physical form. With a strap-handle on the top, it's compact and portable, and would be perfect for taking a few mic pres, or perhaps a three-module recording channel, out on location. I could imagine this having appeal for anyone with a larger 500-series rack already plumbed into their studio.

In the studio, its advantage is that it can be mounted within a desk surface and placed at different angles. You could quite easily have a pair of these in front of your DAW and speakers, placed either side of your computer keyboard, putting six modules within easy reach and angled for good visibility of their controls and meters.

In fact, there were only a few areas I could see for improvement, and even then, these aren't really problems. First, the Feed switches are on the rear. While that's fine if you're using the Cube as a portable or rackmounted system, it reduces its flexibility when you have it mounted in your desktop. Second, the Feed function works only left to right on adjacent units: I could find no way to route from the first slot to the third and then back to the second. Yet, I can't really complain about that, given that even in this configuration, the Workhorse units offer something that other racks do not. Finally, there's a small metal ridge on the top-front of the case that I can only think is there for styling, or possibly to increase the case's rigidity. Either way, I found it mildly frustrating, as it made slotting in some third-party modules with large controls a bit more tricky than would otherwise have been the case.

Those very minor issues aside, I was very impressed by the Cube. It would make a great lightweight addition for someone who already has modules racked up and wants to be able to cherry-pick a few to take on location. It would also provide a good route into the 500-series system for those working in smaller project and home studios. And if you don't need to take things out of the studio and don't want to cut up your desk, it's good to know that Radial's Workhorse Powerstrip, launched at the same time as the Cube, offers everything I've discussed in this review, but in a 1U rackmount form!

Most 500-series racks host more units than this, but if you're looking for something quite compact, there are two-module racks available from A-Designs and Empirical Labs, and there's also a more compact two-module case by BAE.

Radial once promised to drive down the cost of 500-series racks, and having first launched the more fully featured and higher-priced Workhorse rack units, they're now doing exactly that. What's more, all their racks, including the Cube, offer useful functionality that the competition does not.