Ribbon mics have long been known for their smooth high end, but can sometimes sound a little on the dull side. Enter the SE X1R... 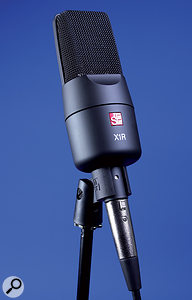 Ribbon mics have had a fairly high profile in the SE Electronics portfolio over the past few years, not least the Neve RN1R and then SE's two Voodoo models. Ribbons are prized for their ability to deliver a smooth high end, and thanks to modern design innovations, the slightly dull sound of some vintage ribbon models isn't a characteristic shared by their modern counterparts, although their warmth, smoothness and musicality remains. This musical tonality is particularly useful for taming the shrill excesses of guitar cabinets, drum overheads, wind and strings, especially solo bowed strings. There are also broadcast and voice-over applications for this type of mic.

The SE X1R ribbon microphone is a passive ribbon design that comes in at a significantly lower price point than the passive Voodoo model. Its ribbon element sits in a neodymium-magnet motor assembly, and the mic incorporates some spin-offs from the Voodoo HF extension technology — although its high end doesn't extend quite as far as those particular models. SE call it a hybrid of old and new ribbon technology, which is probably a fair description.

Outwardly, the mic looks very much like its capacitor counterpart, the side-address SE X1 cardioid model, and, like all SE microphones, there's a lot of 'by hand' work involved in its manufacture. The housing is all metal and very rugged, featuring an attractive, non-slip, textured black finish.

Like all conventional ribbon mics, the SE X1R has a figure-of-eight polar pattern, which inherently dictates a significant proximity bass boost that may need some EQ compensation when the mic is used very close up. The two-micron-thick aluminium ribbon can handle SPLs up to 135dB, so this is no fragile flower, while the frequency response is within ±1dB from 20Hz to 16kHz. As you'd expect from a passive ribbon, the output is fairly low, with a sensitivity in this case of -55.3dB (±1dB, 1V/Pa), so you either need a decent mic preamp that can offer high gain and low noise or, alternatively, an active in-line gain booster, such as the Cloud Lifter from Cloud Microphones, to get the best performance.

Note that passive ribbon mics don't need phantom power, but will tolerate it, providing the mic is plugged in using a conventional balanced cable before the phantom power is applied. Hot plugging or unplugging can stress the ribbon, however.

Unpacking the mic reveals that although the outer packaging is a simple cardboard box, the interior contains a high-density foam block with cut-outs for the mic and the included stand clip. This foam block could be left in the box or used as an insert in your mic drawer for storage.

Once in front of a sound source, this mic reveals its true colours, and right away I found that what it delivered was actually rather more useful than what I've got out of many other ribbon mics I've tried. The frequency range is not too dissimilar from what you'd expect from a moving-coil dynamic mic, so there's a reasonable amount of high end, but because of the 'uncomplicated' nature of the ribbon diaphragm, there's none of that nasal coloration that so many moving-coil mics impart to the sound.

Electric guitar sounded great right away — I got pretty much what I was hearing in the room from the amp even before thinking about adding EQ. The top end had presence and projection but with no trace of added fizz, and lows came across as solid and full of authority, so I award it full marks in this role.

On speech, the mic again performed somewhat like a well-mannered moving-coil model, but more open and natural-sounding. It certainly offers a useful alternative to either moving-coil or capacitor models in this application. Even on acoustic guitar, the general tonality came across pretty much as I heard the instrument from my playing position.

A big advantage of ribbon mics is that, because of the smooth nature of their sound, you can use quite a lot of HF EQ boost to add more air, as worthwhile output is still produced as as high as 20kHz. While the level may drop away above 15kHz or so, there's still enough there to boost if needed.

As I suspected, the output level of the mic was a touch on the low side, so I used my Cloud Lifter plugged into my usual audio interface, as the mic amps in my interface tend to pick up some computer noise when turned up near full. I could get away with plugging directly into the interface for recording a guitar amp, but ideally not for spoken word or acoustic guitar. With the Cloud Lifter in circuit, there was plenty of level and no noise problem, even when adding top-boost EQ.

Overall, then, it's a thumbs-up for the SE X1R, as it delivers useful results on just about anything. I particularly like it for miking electric guitar amps, but it offers good all-round performance when you need a smoother alternative to a capacitor mic but don't want to deal with the nasal or honky characteristics of a typical cardioid-pattern, moving-coil mic. Best of all, it is very affordable, as the original price of almost £300 has been pared right back, so that the typical cost of the mic is now less than £150!Best of all, though, it is very affordable!

Ribbon models from Golden Age or Shiny Box are probably the closest alternatives in this price range.

A genuinely versatile ribbon mic that sounds smooth but not dull.