The stereo mix bus A output fader (with 10dB of gain above the zero mark) is on the right-hand side of the console. Immediately above is a group of four buttons with status LEDs, the first of which activates the mix bus A insert return. The others enable the additional summing bus contributors: External 1, External 2 and, rather unusually, the stereo cue 1 bus (so that those alternative mono external inputs described above can be employed in the mix). 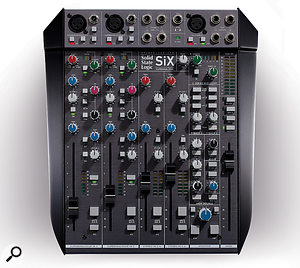 Despite the smaller size, the SiX looks and feels like a 'real' SSL, and the familiar coloured knob caps aid navigation of the (inevitably slightly crowded) controls.As a result, mix bus A sums two mono input channels, four more from the two stereo line input channels, another four from the two External stereo inputs, and yet another pair by way of the mono channels' cue 1 external inputs. That makes 12 summing inputs in total (10 line and two mic/DI/line), which is quite an impressive feat for such a compact device. This feature also works for bringing stereo effects returns into the master stereo mix, or for cascading an expansion mixer, of course.

Mix bus A's signal path is quite simple, with the mix bus summing amplifiers driving the master insert send, and then the bypassable return feeding into a (simplified) G-series bus-compressor ahead of the main stereo output fader and output drivers. Mix bus B is even simpler, with the mix bus summing amps driving a rotary fader (with mute button) before the output appears at the rear‑panel connectors. If you were wondering (because they're not entirely obvious at a glance), the mix B rotary fader and mute button can be found nestling amongst the profusion of knobs and buttons in the monitoring section, alongside the main output fader.

Interestingly, while the stereo bus compressor is based directly on the classic and much-loved G-series design, it has been simplified and uses a more modern VCA chip here (although the SSL gurus assure me it sounds exactly the same!). Its three controls are located at the top of the desk, alongside the output metering, and comprise threshold (-20 to +20 dB), gain make-up (0 to +20 dB), and an 'In' button. There's also a five-segment gain-reduction meter (0-15 dB). The attack and release times are fixed, as is the very soft-knee 4:1 compression ratio — settings which I'm told were chosen to reflect those most commonly used on the big studio consoles.

The monitor section is reasonably versatile, with mix bus A, mix bus B (both post-fade/post-mute), External 1 and External 2 (post-level controls) all available as sources which can be auditioned individually or in mixed combinations. There's one potential 'gotcha' to watch out for, though: with no source selected there's no monitoring output at all, and it's not entirely obvious if the buttons are depressed or not! I was also surprised to find no way to monitor the foldback outputs to check what the artists are hearing, though the two stereo cue sends can be auditioned on the headphone output. A large, 11-segment bar-graph meter displays the monitored signal and is scaled from -21 to +24 dBu, with greater resolution above the 0dBu mark than the input meters. Dedicated segments for +15, +18 and +24 dBu make alignment with standard DIN, EBU and SMPTE A-D converters very straightforward.

Input channel PFLs always override the selected monitoring source(s) when activated, and there's also a mono button (introducing -3dB attenuation of the summed stereo signal), monitor mute, and output routing to either the main or alt speakers. Frustratingly, while SSL have seen fit to provide an adjustable -3 to -30 dB dim facility, they've not included a right-channel polarity reverse button, so it's impossible to check the stereo difference signal (something I find essential!).

A single rotary level control, which is the largest knob on the console, sets the listening level for the main and alt outputs, and the engineer's headphones have a separate volume control. Normally, the headphone output carries the selected monitoring signal (including the PFL override), which is derived after the mono button but unaffected by the dim, mute and monitor level controls. The headphones can also audition the cue 1 or cue 2 mixes (as opposed to foldback 1/2), if desired, which is useful if an artist is working in the control room.

More usually, performers would use the mixer's two stereo foldback outputs for their studio headphone amp, and each foldback output has its own rotary master level control. Logically enough, foldback 1 carries the cue 1 signal, and foldback 2 the cue 2 signal, but these can be replaced individually with either of the two External inputs or with talkback (all using separate latching buttons). I was surprised that there are no LEDs to warn when talkback is active, particularly since the buttons are mechanically latched types. However, this latching arrangement does enable the talkback signal path to be used as a third mic input by routing the relevant foldback output back into an input. This makes it practical, for example, to record a drum kit, with kick and snare mics through the two mono channels and an overhead/room mic via another line channel (and squashed through the LMC if desired).

The SSL boffins have done a very good job with the console ergonomics on the whole, especially given this mixer's very small footprint and generous feature set.The panel layout is inevitably quite 'busy', though, and I found I had to look carefully to find the function I wanted even after using the desk for a week. Thankfully, there are status LEDs almost everywhere that matters, and coloured knob caps help to identify the different features (although the adjacent proximity of channel and cue 1 pans on the mono channels often confused me). The monitoring section requires careful use, too, and some print shading under the monitor section controls might help to separate them visually from unrelated functions. 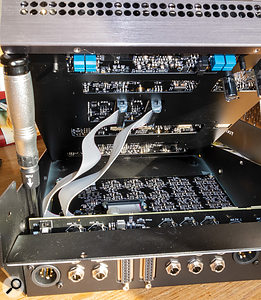 I've used a screwdriver to prop the top of the mixer open, revealing the high quality PCBs and the steel case enclosing the upper section's electronics. There's a lot of metalwork in here which accounts for its strength and ruggedness.Internally, the SiX uses surface-mount components almost universally, as you'd expect, but the standard of construction is everything you'd hope and desire of an SSL product; it really is outstanding. The lower panel I/O connects to a very high-quality PCB on the base of the unit carrying the balanced receiver and driver circuitry, and that is linked via a couple of ribbon cables to a second PCB suspended under the front‑panel controls. This board is enclosed within its own steel casework, which provides additional screening and mechanical support. Servicing might not be terribly easy, but it's certainly a solidly built piece of kit which oozes quality, ruggedness and longevity wherever you look!

Although there are a few surprising and potentially disappointing omissions (the lack of input polarity reverse buttons, a stereo-difference monitoring facility, active talkback status LEDs, and foldback AFLs), I have to say that this is a lovely little console which performs as well, and is as nice to use, as any of its much larger siblings. It really is a remarkably versatile and capable little mixer which slots in very elegantly alongside the X-Desk and XL-Desk in SSL's range. It would seem logical to assume a larger version will follow in due course, now that SSL have access to more cost-efficient manufacturing, but to my mind, much more appealing to many prospective users would be a version featuring an integrated audio interface. Who wouldn't want an affordable SSL console providing the front and back ends of their DAW-based studio setup?

Sound wise, the SiX's performance is exemplary. Headroom margins are generous, noise and distortion are as low as best practice allows, and the bandwidth is huge — all of which means this desk sounds completely transparent. And yet, the one-knob compressors and EQ on the mono input channels can be used creatively to shape sources when necessary, and the stereo bus compressor does exactly what is needed to glue a mix together.

It's impossible for me not to fall in love with this sweet but extremely capable little console, and think up countless applications and justifications for purchasing one — and plenty of people will feel the same!

Small desktop mixers may not be uncommon, but there is no other that is so compact, yet so well-equipped and versatile as the SSL SiX — and certainly nothing of this size that can match its technical performance. 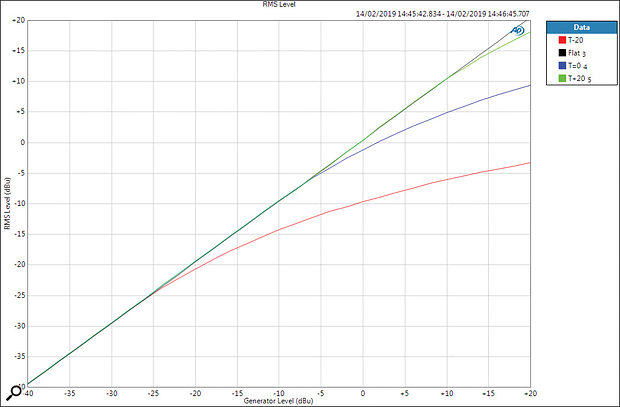 The main A bus compressor exhibits a very soft‑knee curve, which eventually reaches a 4:1 ratio, with the starting thresholds corresponding well to the controls markings. (Black trace is compressor bypassed, red with the threshold set to -20dB, blue at zero, and green at +20dB.) 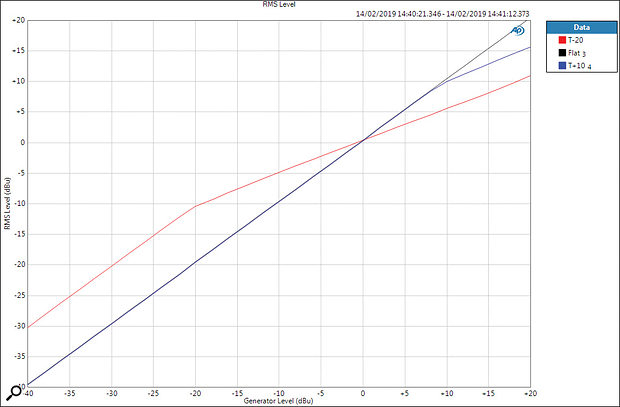 The one-knob channel compressor response has a very hard knee and 2:1 ratio, with the thresholds corresponding accurately to the control markings. Note the automatic make-up gain applied with the lowest threshold setting (red). (Black trace is with compressor bypassed, blue at +10dB and red at -20dB.) 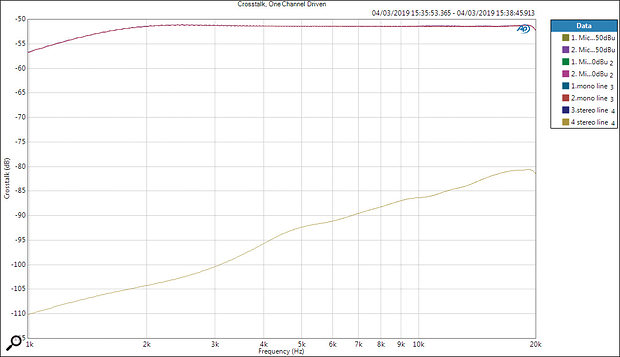 The crosstalk between left and right channels of the stereo line input, measured with respect to frequency. The lower trace was measured at the main outputs from a stereo line input channel, and follows the expected rise at higher frequencies while remaining below -80dB even at 20kHz, which is excellent. The upper traces were obtained via the mono channels, testing the mic input at both -50dBu and 0dBu input levels. 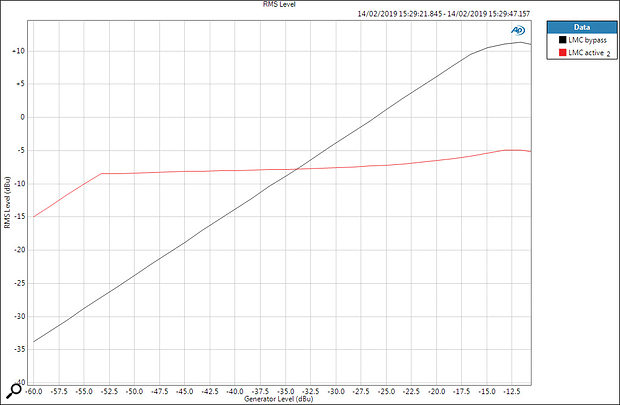 The talkback channel features SSL's 'Listen Mic Compressor', although that's clearly a misnomer as the plot clearly reveals it to be a limiter with a threshold of -53dBu and 20dB of make-up gain! (Black trace is with LMC bypassed, red with it activated.) 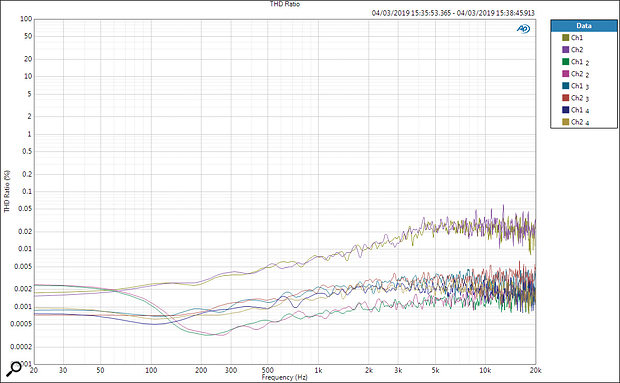 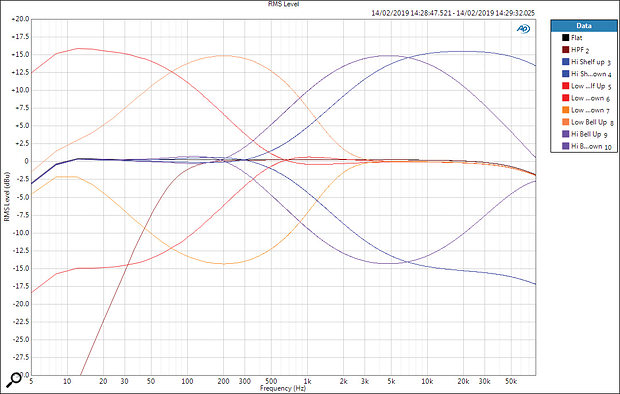 A combined plot showing the EQ settings available on the mic/line channels. The black plot is with all EQ bypassed, revealing the -3dB bandwidth limits to be around 4Hz and well over 80kHz. The brown trace is for the high-pass filter, red for the low-shelf with maximum boost/cut and blue for the high-shelf. The purple and orange traces are for the two bell EQs. The corner and centre frequencies all tally precisely with the published specs. 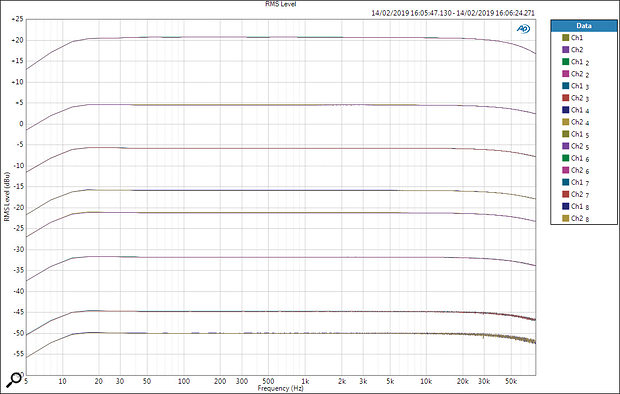 A frequency response plot which shows the output level from a -50dBu input as the mic preamp's gain control is advanced in equal rotary increments. While the gain does increase slightly more quickly towards the clockwise extreme, overall the response is pleasingly linear and easily controllable.

A high resolution FFT plot of the residual noise floor, revealing a few mains-related spikes, but all below -120dBu.

The most affordable SSL ever, this is an impressively well‑built mini-console. Its well thought-out and versatile capabilities should make it very attractive indeed for a wide range of small-scale but quality-conscious applications. If paired with a decent audio interface, the SiX could double up as both a high‑quality analogue front end for your DAW and a monitor controller.