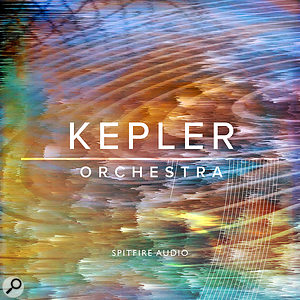 Since time immemorial, astronomers have used maths as a tool to develop their theories. One such stargazing number-cruncher was the German mathematician and physicist Johannes Kepler, whose laws of planetary motion helped to fuel Sir Isaac Newton's gravitational theories. In his 1619 publication Harmonices Mundi Kepler proposed the concept of musical harmonies based on the ratios of maximum and minimum angular speeds of planets — the 'music of the spheres' of ancient times.

While this fanciful notion has inspired several concept albums, late-20th century composers such as Terry Riley, Steve Reich, Philip Glass and John Adams found it more fruitful to apply numerical processes to musical rhythm, leading to the influential 'systems music' style which places more importance on repetition with minimal changes than on harmonic development. Now, 400 years after the publication of Kepler's visionary treatise, we have the Kepler Orchestra, Spitfire Audio's combined homage to the 17th century astronomer and the great American systems composers.

The brainchild of Spitfire's Paul Thomson, Kepler Orchestra was inspired by the idea of contrasting rhythmic subdivisions that move in and out of sync like orbiting planets. To this end, it contains a set of cyclical orchestral articulations optimised for scoring realistic repeated notes and complex polyrhythms. Other goodies include 'momentum', 'shards' and 'doppler' performances (described below). In addition, there's the inevitable 'warped' section in which granular resynthesis and outboard effects mangle the raw samples into new soundscapes.

The project was recorded in the tight, dry acoustic of Air Studio One, the same room used for Spitfire's excellent Bernard Herrmann Composer Toolkit and Studio Orchestra libraries. A chamber-sized orchestra of 40 strings, 13 woodwinds and 19 brass players were recorded as separate ensembles from close, ambient, mid and wide mic positions, with an additional mix option created by recording engineer Fiona Cruickshank.

Building on Spitfire's Evo Grid technology, Kepler Orchestra's Systems Grid houses a comprehensive set of repeated notes sync'ed to your host tempo. It contains no tonal evolutions: the repetitions are played straight at one dynamic with up to 14 rhythmical subdivisions, any of which can be independently mapped to 10 keyboard zones using a solitaire-style 'peg board' grid which displays mapping assignments as small coloured lights.

It's simple to operate: load an ensemble, hold down a key and you're rewarded by an insistent, pulsing single-note repetition with built-in light on-beat accents creating a satisfying forward momentum. Presented in a choice of duplet, triplet, quintuplet and septuplet divisions, the repetitions allow you to create combinations of different rhythmic groupings in whatever length or time signature you choose.

I liked the three string sections' pulsing repetitions, which manage to sound urgent, powerful and propulsive at faster tempos while avoiding the pointed, percussive, somewhat manic quality of today's string spiccatos. These strings have a more expansive 'brushed' feel, and their re-bowed performances sound lush and languorous at slower speeds. I particularly enjoyed the thrumming low-end energy of the basses' pizzicatos. Skilfully orchestrated by Ben Foskett, high brass, low brass and woodwind ensembles mirror the strings' rich, full timbre and rounded note attacks, with the bassoon doing a great job in the woodwind low register.

When superimposing rhythmic subdivisions, I found that simple combinations work best: 16th notes layered over eighth notes, or low woodwind fast triplets bubbling under high woodwinds eighth notes. From a groove point of view, layering quintuplet or septuplet divisions over a straight eights pattern just sounds out of time, but if you're not in toe-tapping dance–floor mode you can get some nice blurry, impressionist orchestral effects by slowing the tempo and sequencing (say) quintuplets over a four-based pattern. I've a feeling Kepler would have approved.

Spitfire have created a bunch of 'snapshot' patches to get you started, a stellar example being 'Time Madness', a vigorous, celebratory swirl of violins and violas. Other variations include muted (softer) and sul ponticello (harder and more wiry) high strings and cellos repetitions. The strings' muted tremolo performances evoke the tense, edgy atmosphere of Herrmann's opening Psycho music, and despite the caveats issued above, I found layering fives over fours with this patch sounded pretty exciting!

The 'momentum' patches' repeated-note crescendos can be used to create great oceanic swells of sound — the 'pulsing momentum' version is also very effective, a continuous crescendo/diminuendo wave of repetitions. The same dynamic approach is applied to accelerating repeats, a good sonority for creating builds. 'Shards' turn out to be a single dramatic crescendo played at various lengths, while the tremendous 'dopplers' are an orchestral rendition of the pitch change you hear in a passing ambulance siren or train bell, performed as a slow semitone pitch-bend.

Spitfire use a different, simpler interface called the Mercury synth as the front end for their 'warped' effects. Nestling among the scary sound-design patches we know and love, I found great end-of-days drones ('Charon' and 'Janus'), brilliant sci-fi effects ('Ariel' sounds like being sucked into a black hole) and some stunning textures: 'Ganymede' is a calm, peaceful and lyrical slow-building orchestral crescendo, while 'Rhea' is a superb pad, lush, vibrant and full-bodied with a lovely breathy attack.

The advanced Kontakt scripting required to power this polyrhythmic marvel makes it (in Spitfire's Christian Henson's words) "a razorback of a system hog". To ease the CPU load, Henson advises turning off the internal quantisation and freezing tracks as you go — I'd also suggest using the 'mix' patches until you're ready to render your sequences as audio. More of a problem for me is the fact that the note repetitions play at half the speed of the subdivisions shown on the GUI, which means that if you want to hear 16th notes at 120bpm you have to double your song tempo to 240bpm.