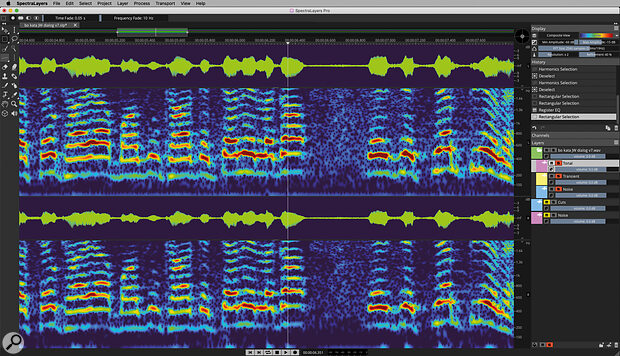 Steinberg are on a mission with SpectraLayers. So, what’s new with Pro 8?

Steinberg acquired SpectraLayers in 2019, and SOS have covered both the Pro 6 (December 2019) and Pro 7 (February 2021) releases since then. However, less than 12 months on from the v7 release, Steinberg are back with SpectraLayers Pro 8. Existing users can be reassured that all the established functionality remains and, for those unfamiliar with the product (or spectral editing in general), you can dip into the SOS archives for a comprehensive catch‑up. In this review, I’ll focus on the key additions and improvements that the latest release delivers.

Amongst the new additions, perhaps two of the most eye‑catching are the new ‘second generation AI'‑fuelled Ambience Match and EQ Match features. The most obvious application for Ambience Match would be within the film/TV ADR process. ADR is commonly used when the dialogue recorded on set is not of sufficient quality, but it can be problematic to make the studio‑based replacement dialogue sound like it was recorded in the same environment as the on‑screen action. Adding some of the background/ambient noise from the original on‑set audio is generally required. SLP8’s new Ambience Match feature makes this incredibly simple to do, allowing you to capture the background noise from one audio recording and then apply it evenly across any other audio, including the pristine, studio‑recorded dialogue replacement.

This task can be performed within the standalone version of SLP8 but, for anyone working in a compatible DAW such as Nuendo or Cubase, it’s likely to be more efficient to use SLP8 as an ARA2 plug‑in. Once it’s inserted as an ARA2 extension on your source track (the original on‑set dialogue), you can simply select a time range that contains just background noise (between dialogue phrases, for example) and execute the Process/ Ambience Match/ Register Ambience command to ‘capture’ the required ambient sound profile. Once done, you can then select a different audio layer and execute Ambience Match; the captured ambience is then added evenly across the entire length of the audio within the selected layer. You could apply this ambience directly to your ADR track or, for greater flexibility, to an otherwise empty audio clip. The latter option lets you control the balance between ambience and the replacement dialogue track at the final mix stage. 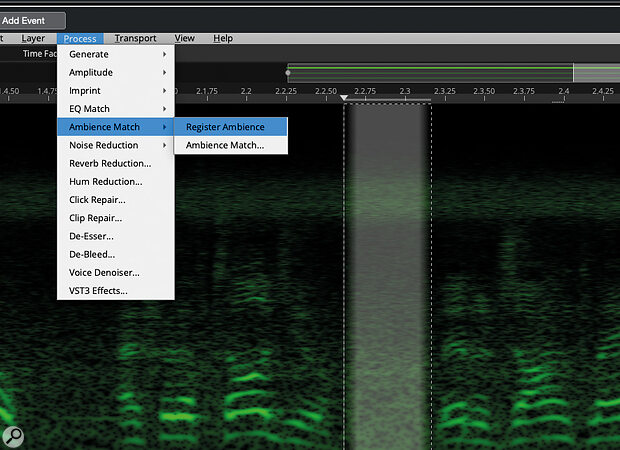 The new AI‑based Ambience Match algorithm will be a boon for those doing lots of ADR (automatic dialogue replacement) work.

The Ambience Match process is very efficient and generates a very even reproduction of your ambient noise capture, without any of the obvious signs of looping that can occur if you simply snag a bit of the noise and repeat that under your ADR. The process can obviously have applications beyond ADR, potentially letting you make any studio‑based audio signal sound like it was recorded in a different environment with very particular ambience characteristics.

Taking the tonal characteristics of one audio signal (your EQ source) and applying them to another (your EQ target) is, of course, something that other software has made possible for quite some time. In that context, SLP8’s new EQ Match might not seem too groundbreaking. However, like Ambience Match, it is remarkably easy to use (particularly via ARA2) and is built upon SLP8’s AI spectral editing algorithms. The same simple two‑stage process of registering an EQ curve from a reference audio layer, and then applying it to a target audio layer is involved, but you also get a percentage slider (from 100 percent to zero) to control how strongly the ‘match’ is applied. 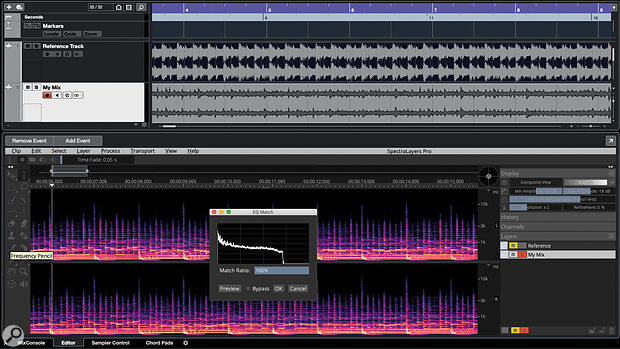 The new EQ Match process is an interesting proposition within a music mastering workflow, and the improved ARA2 integration makes for a streamlined process.

There are lots of obvious applications here including in mastering, either to match your own mix’s EQ to a reference, or to nudge multiple tracks within an album/EP project towards a similar overall EQ shape so they feel sonically cohesive. Maybe I simply got lucky with the materials I used in testing but, a few graphical gremlins within the ARA2 extension aside, I have to say that this was the best EQ matching process I can recall experiencing. I’ve no idea what’s going on under SpectraLayers’ hood, but it’s clever stuff.

The EQ‑matching process could also be very useful within the recording stage. For example, when you return to a song project to do further overdubs — guitar or vocals, for example — it can often be difficult to exactly match the tone, regardless of how carefully you try to recreate the original signal chain. I can imagine EQ Match usefully nudging your overdubs into sonic alignment with the original tracks.

I’m also sure there is potential in combining these two ‘matching’ processes. For example, could you capture both the ambience and EQ from a legendary Led Zeppelin drum track and apply it to your own drum mix? Could you match both ambience and EQ from a live performance guitar track and apply it to a studio overdub or two to replace some duff notes, so that the overdub blends in more easily to the rest of the live recording? SLP8’s new matching features will undoubtedly provide some interesting experiments to explore.

Two processes for removing or reducing unwanted elements within audio have also received an AI‑based enhancement: De‑Bleed and Reverb Reduction. De‑Bleed allows you to reduce the spill into one microphone based upon a recording from another microphone. The obvious application here is to help clean up a multitrack drum recording, allowing you to take, for example, kick and hi‑hat bleed out of the track recorded with your snare mic. Of course, bleed can be one of things that helps give a drum mix a sense of cohesion but, if you do need to clean things up, De‑Bleed has the advantage over conventional gating in that it can try to subtract the spill even when the two drums are played at the same time. 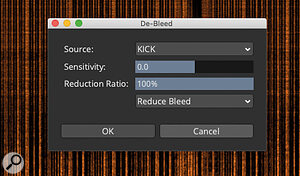 De‑Bleed provides an interesting alternative to conventional gating for tasks such as cleaning up a multitrack drum recording.Applied to a single drum track the process is pretty slick, with a simple dialogue allowing you to select the appropriate layer to reduce the bleed from. You can also tweak the sensitivity of the algorithm and adjust the percentage of the reduction to find the best compromise between bleed reduction and any possible audio artefacts. The results are impressive, and I was able to clean up a snare track by De‑Bleeding both kick and hi‑hat elements in two passes. Auditioned in isolation, I could hear the very occasional artefact from the process, but these became inaudible when the snare was blended back into the overall drum mix. The only downside is that, for a complex multitrack recording, if you wanted to clean up everything, it might involve a lot of iterations of the De‑Bleed process. That’s a somewhat picky criticism, though, given how well it works.

Reverb Reduction has been available in SLP since v3, but this also gets the AI treatment in v8, making it easier to use. You can adjust both the sensitivity of the reverb detection and the percentage of reduction. Equally, you can flip between reverb reduction or signal reduction, with the latter allowing you to isolate just the reverb if required. This combination of options provides plenty of both corrective and creative possibilities. Testing with a common application — reducing reverb on dialogue recorded in a room with lots of natural reverberation — proved very effective and could easily be used to attempt a rescue job on an otherwise unusable audio recording.

So, headlines aside, what else is new? Well, the revamped Reverb Reduction process is not the only improvement for cleaning dialogue; the Voice Denoiser has also been revamped. This now offers two different AI algorithms; one for the spoken voice (Noise) and one for sung vocals (Music), both of which try to isolate the voice from the rest of the audio. Presumably, Voice Denoiser’s algorithms share technology with the stem unmixing process that was the star addition in the SLP7 release. Whatever is under the hood, though, the results can be very good and some combination of Voice Denoiser, Reverb Reduction and Noise Reduction can deliver dramatic improvements in a noisy, ambient voice recording. If the starting point is particularly bad, don’t expect perfection, but ‘useable’ may still be a win in many circumstances.

Other improvements include the ability to set hard limits for both the Eraser and Amplifier tools; improved multiple selections (including saving multiple selections within a project); better options for selecting harmonics; improved repair for clipping and, if you have suitable audio hardware, support for sample rates up to 384kHz. Used alongside the harmonics selection options, the new ability to view pitch‑shifting in semitone‑based intervals has some interesting musical applications. For example, in a recording of piano chords, I was able to select the harmonics associated with just the major third of the chord and drop those by a semitone to create a minor chord. While the workflow is not as slick as Melodyne’s polyphonic mode in this regard, it can certainly work and, for modest moves, the quality of the shifting is very good indeed. 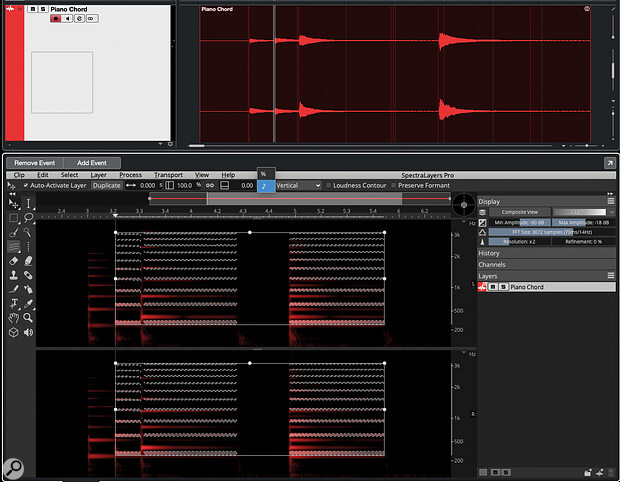 Pitch‑shifting within SLP8 can be now be done on the basis of semitones, as being used here to convert a major piano chord into a minor one by dropping the third down half a step.

Perhaps the most notable other improvement is in the integration of SLP8 within a host via ARA2. The main change here is that you can have independent SLP8 instances within the same ARA2 host project; not all clips being edited via SLP8 therefore have to appear as layers within a single SLP8 editor window. This makes it much easier to manage your workflow, allowing you to group related audio clips (for example, your drum tracks for De‑Bleeding) into their own SLP8 instance. The SLP8 ARA2 sub‑window also now includes Remove Event and Add Event buttons, allowing you to remove or add audio clips to a specific SLP8 extension instance as required. I’m sure there are still refinements to come for the ARA2 integration, but this is a very useful step forward for both music producers and post‑production specialists.

Quietly and confidently, Steinberg seem to be committed to bringing the power and potential of spectral editing into the audio mainstream.

Steinberg have undoubtedly delivered some excellent enhancements to SpectraLayers Pro since 2019. With impressive new features (such as stem unmixing), improved accessibility (complex processes that are less intimidating to use) and streamlined workflow (via AI algorithms to do the heavy lifting and ARA2 integration), it would therefore appear that they are investing heavily in the software and its development. This is good news for existing users and potential new users alike.

So, do the new developments provided by v8 scream ‘buy me!’? There may be some existing users who might hesitate, particularly if their v7 update is still relatively fresh in the memory (and on their credit card statement). However, if SLP is an essential part of your workflow in dialogue post‑production, drum mixing or audio restoration, v8’s new features will get you better results and let you get them more efficiently; in a commercial context, the upgrade could pay for itself very quickly in enhanced productivity. For undecided potential new users, Steinberg do have a free trial available for download on their website, so you can try before you buy.

Quietly and confidently, Steinberg seem to be committed to bringing the power and potential of spectral editing into the audio mainstream. They have made great strides since 2019 and SLP8 is a further welcome step in that direction.

SpectraLayers Pro 8 brings some excellent new features and further workflow improvements. Steinberg are continuing to transform the power of spectral editing into a much less intimidating format.