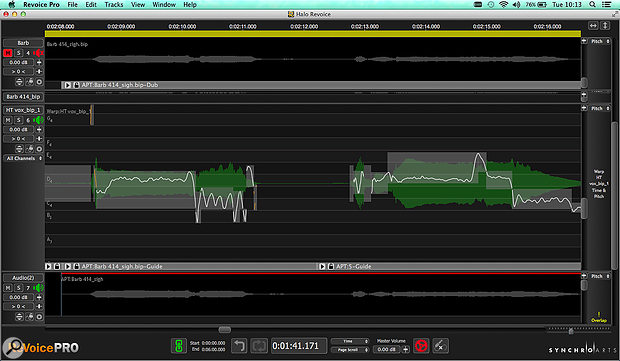 Revoice Pro 3 in action. The zoomed-in track in the centre is my lead vocal, which I have made into a Warp Region, as you can see from the note blocks and pitch line superimposed over the waveform. The track at the bottom has been created by applying the APT Process using the lead vocal as a ‘guide’ and the backing vocal take at the top as a ‘dub’. Compare the top and bottom tracks and you’ll see that the timing has been subtly altered to fit the lead vocal better.

Thanks to the addition of powerful pitch-correction and manual time-warping features, Revoice Pro 3 offers a complete vocal-processing toolkit.

In film dubbing and post-production circles, Synchro Arts’ VocAlign is to dialogue replacement what Antares’ Auto-Tune is to pop production: a product so widely used that its name has become a generic verb describing its function. As that name suggests, VocAlign’s forte lies in taking different takes of the same vocal performance and matching their phrasing. It’s invaluable for dialogue replacement, but also very handy when working with stacked backing vocals in a music production.

Synchro Arts exploited the musical potential of their technology further with Revoice Pro, version 2 of which was reviewed in SOS May 2013 (www.soundonsound.com/sos/may13/articles/revoice-pro.htm). Revoice Pro 2 incorporated the company’s trademark phrase- and time-matching features, but took things further by allowing the user to transfer not only the timing of a performance but also its pitching, along with other qualities loosely described as ‘energy’. It could also create convincing impressions of a double-tracked performance from a single source.

The major developments in the new version 3 of Revoice Pro see it go head to head with products such as Auto-Tune and, especially, Celemony’s Melodyne. For the first time, Revoice now includes pitch-correction, with a focus on the sort of detailed manual editing of pitch and timing that you can only really achieve in an offline application, rather than a real-time plug-in. As before, Revoice Pro 3 operates only as a stand-alone program, but it is now available for Windows as well as Mac OS. A valid iLok authorisation is required in order to use it. I must briefly pause at this point to mention Revoice Pro’s electronic documentation, which is superb. Where too many manufacturers offer impressive-looking but ultimately frustrating PDF files full of blank pages and redundant information, Synchro Arts have put together an HTML manual that is a model of economy and clarity. It’s fully hyperlinked and generously illustrated with screen captures, and there are also numerous video tutorials available.

One slight operational oddity I encountered with the Mac version is that it uses Apple’s Time Machine to auto-save backups at intervals, but that these operations only complete if you happen to be doing nothing in Revoice Pro at the time. As a result, I quite often found myself greeted with a slightly alarming message telling me that saving had failed, when I hadn’t realised that there was any saving going on!

Get A Wiggle On

Audio files in WAV or AIFF format can be opened directly into Revoice Pro, but as described in our review of version 2, it’s also possible to use Revoice Link plug-ins to capture audio from tracks in a DAW running simultaneously. I found it simpler just to render the audio as a new file where necessary and load it in the old-fashioned way from the Finder.

The program’s none-more-black interface displays audio in a fairly conventional way, as waveforms positioned on horizontal tracks. A track can represent either an existing audio file opened within a program, or new audio created as the output from a Revoice Pro Process. Making use of the existing version 2 functionality requires that you do this: rather than editing a target or ‘dub’ track directly to bring it into line with the ‘guide’, you open up the Process window, select the relevant tracks and algorithms, and specify a track onto which the processed version of the ‘dub’ file will be placed. Rendering the new audio takes but a couple of seconds, after which you can make adjustments to perfect the settings before exporting it as a new file for import into your DAW.

The new Warp features in Revoice Pro 3 are available as a Process, but they can also be applied directly to existing audio loaded onto a track. With the whole or part of an audio file selected, you right-click and choose ‘Make Warp Region’. Revoice Pro will then analyse the audio and display its findings visually: each individual note or syllable gets its own grey block, positioned vertically to show which musical note, if any, it represents. A wiggly white line runs through these blocks, indicating more precisely the pitch at any given moment in time and visualising pitch scoops, vibrato, glissando or, in my case, plain inability to hit the notes!

Another contextual option is Region Settings, which allows you to set parameters governing the algorithms used to divide the audio up into individual notes. So, for instance, if Revoice Pro’s analysis runs together notes that are sung legato, you can adjust the Threshold parameter in the Separation Of Musical Notes section to improve matters. In general, though, I found that the default settings worked very well, and I rarely needed to visit the Settings panel.

Also available through right-clicking is the option to add Warp Markers. If you’ve ever used the Elastic Audio Warping features in Pro Tools, these will be very familiar in operation; in essence, picking up a Warp Marker and dragging it left or right stretches the audio to one side (up to the next Warp Marker, in fact) and compresses the audio on the other, allowing you to adjust the timing of small sections within an audio file whilst keeping its overall length unchanged.

In normal use, however, adding Warp Markers is only necessary where you want to make timing changes that cut across Revoice Pro’s detected note boundaries. Most of the ‘manual time and pitch correction’ in Revoice Pro is done simply by clicking and dragging, sometimes with the aid of modifier keys. For example, positioning the mouse near the left or right edge of a note or group of notes allows you to drag its start or finish point, changing its duration. Clicking the top or bottom edge does the same with respect to the pitch variation within that note, letting you close up or heighten any natural vibrato. However, it’s also possible to hold down the Alt key whilst clicking and dragging the left or right extreme. When you do this, an angled line appears indicating the overall pitch ‘tilt’ through the note(s), and you can drag to correct or exacerbate this. 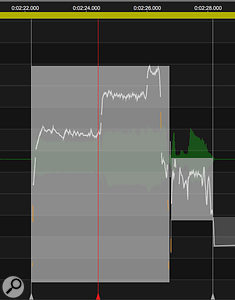 New in Revoice Pro 3 are Warp Markers. Here, I’ve created markers at the start and end of my selection, and by creating and dragging a third marker in between them I can adjust the timing within the selected region.Towards the end of the review period, a beta version of a forthcoming version 3.1 became available, with a number of new features. Perhaps the most significant of these, at least as they relate to the manual pitch-correction, is the introduction of multiple mouse tool modes. A number of features that were previously available only from the right-click contextual menu have now been given their own tools, which can be selected using single-key shortcuts. This development promises great improvements in usability. For instance, if you wanted to manually divide a note block into two, in v3.0 you had to select the note, position the playback cursor at the cut point, right-click and select Split from the contextual menu. Now, you can simply hit the ‘I’ key, whereupon the mouse pointer becomes a Split tool, and you can click anywhere within a note to divide it. There’s also a new pencil tool which allows you to draw in pitch contours.

The right-click Correct Pitch functionality has also been duplicated on a dedicated tool in v3.1: select a bunch of notes with this, and a slider will appear, letting you force their pitch centres closer to the nearest concert pitch value. The effect is, usually, completely natural, but more subtle than most of us would look for in a ‘tuned’ vocal. However, this is still pretty much the nearest that Revoice Pro gets to ‘quick and dirty’ automatic pitch-correction. If you want your vocals to meet even the looser end of modern expectations for pitching accuracy, you’ll need to get busy adjusting the pitch range and tilt of individual notes, and this can only be done manually.

In fact, inasmuch as I can find anything to be critical of, it’s just that Synchro Arts perhaps haven’t yet exploited the possibilities of their technology to the full. While it’s obviously the case that Revoice Pro isn’t targeted at the casual user who wants to quickly bosh his or her vocals into line, I do feel that it would be useful to have more options for automatic correction. For example, much of the work of manual correction consists of stepping through notes and adjusting their ‘tilt’, and it’d be very handy to have the option to globally flatten the ’tilt’ of all the notes within a selection or Warp Region. Something that’s present in Melodyne but almost completely absent here, meanwhile, is any form of musical ‘awareness’. For instance, it’s not possible to constrain Revoice Pro’s pitch-correction to a musical scale (though this may be in the pipeline); and although most of the raw materials needed for automatic harmony generation are present, no such feature is yet on offer. Finally, there’s currently no option to specify a global tuning centre other than the standard A=440Hz. In short, then, pitch-correction and related functions in Revoice Pro 3 differ from the other functionality, such as automated alignment and doubling, in requiring quite a bit of painstaking manual attention.

The good news, though, is that once you get the hang of carrying out manual pitch-correction in Revoice Pro, it becomes a pretty straightforward process, with the tools available being both powerful and easy to use. And the best news is that it’s possible to obtain results which are very good indeed. Basic pitch changes are very clean, and the ‘tilt’ paradigm provides a relatively transparent way of improving the apparent pitching of a note whilst retaining natural vibrato and other ‘wanted’ pitch variation. A useful Smooth function helps to eliminate any sudden pitch jumps that have been introduced by corrective work. A particularly neat feature is that you can use a pitch-corrected track or region as a guide for creating doubles, meaning firstly that you only need to do the work of manual pitch-correction once, and secondly that if you decide to make changes to your correction, these can easily be applied to the doubles and other takes too. With due care and attention, results are possible in Revoice Pro that I think would be hard to top in any other application, even Melodyne, and the addition of pitch-correction makes it into a true ‘one-stop shop’ for touching up vocals to the standard required in modern productions. It’s a professional tool at a professional price, but if you’re serious about getting the best from your vocal recordings, Revoice Pro 3 is about as good as it gets.

The obvious alternative for high-quality pitch-correction is Celemony’s Melodyne, but as far as I’m aware, the only rival to Revoice Pro’s clever time-alignment functions is the new VocalSync feature built into the latest version of Cakewalk’s Sonar DAW.

Version 3 of Revoice Pro retains its unique powers for tightening up and generating vocal double takes, and adds manual pitch- and time-correction features that are up there with the best.