This latest addition to the ever-expanding EZX expansion library comprises two of drummer Robby Ameen's Pearl custom drum kits, set up and tuned for recording Latin-flavoured rhythms. Compatible with both EZdrummer 2 and Superior Drummer 3, these kits were recorded by Dave Kowalski in Sear Sound Studios, one of the oldest studios in New York. The studio has an old Neve console and a fine collection of classic mics, which were put to good use during the recording of these kits. They are beautifully sampled at multiple velocity levels and enjoy the usual EZX options of adjusting the mixer to rebalance the contribution of the various microphones. A Latin Cuban Percussion EZX is due for release later in June 2020, which should sit nicely alongside these kits. 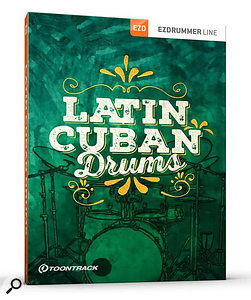 What we have is a choice of two kits both arranged as three-tom, single-kick setups augmented by a single timbale plus cowbells, songo bells and woodblocks. The fairly high tuning of the kits, the use of rimshots and the inclusion of the appropriate bells and blocks is what creates the Latin sound and the Latin-styled MIDI files focus on the clave patterns that these musical styles tend to be built around. The collection of cymbals is impressive too, with dual hi-hats plus five cymbals set up around the kit — or six if you count the two that are stacked together.

As expected, you can switch out some of the kit parts — for example, the total cymbal library includes four crash cymbals, two cymbal stacks, four ride cymbals, two standard hi-hats and one right-hand effects hi-hat. In addition to the usual drum mics, the side of the floor tom is also miked. We're told it's to mimic the traditional 'cascara' playing style — again another clave-style percussion element.

The way the Pearl Reference Latin kit is tuned and miked in the live room at Sear Sound makes it sound very resonant and lively. However, the variations on offer are surprisingly wide with some very punchy options making this kit suited to a number of contemporary pop or even rock styles. For cymbals, Istanbul Mehmet seems to be the brand of choice. Again the additional percussion elements, some played by footpedal, are what create the real Latin feel.

For the Cuban kit, we have a set of Pearl Masters Custom drums based around a 16 x 20 inch kick and a 5 x 14 inch snare. Again, Robby sticks with his choice of Istanbul Mehmet cymbals and the Latin-style additional percussion. The sound is lively and intimate, but if you need something that packs more of a punch, that's in there too. Either kit could lend itself to either style so there's plenty of flexibility here, both within and outside the Latin/Cuban genres, and the MIDI files that come with the EZX really bring the kits to life. Latin Cuban Drums is yet another excellent addition to the range and worth a closer look even if Latin music isn't your main focus.