Having already given us a virtual studio multitrack tape recorder, the boffins at Universal Audio turn their attention to mastering machines. 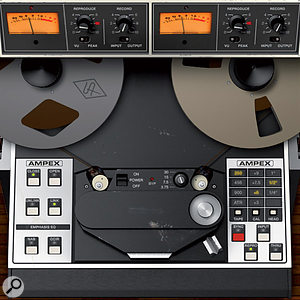 The output of the plug-in can be monitored through the repro head, the sync head or just the input electronics.

Introduced to the market back in 1976, the two-channel Ampex ATR102 analogue tape recorder is a mastering classic and, after the Studer A800, is the second tape machine to be faithfully modelled by Universal Audio. However, comparing this plug-in with any given original would only tell part of the story, as ATR102s were often modified to run at different tape widths up to one inch, and may have been further modded to remove their audio transformers. Likewise, there are adjustments on this plug-in that go far beyond what the original hardware would have offered, including variable wow and flutter and tape hiss that would, at the higher settings, make even a cassette dictaphone look good.

Amongst the ATR102's attributes is its ability to run almost totally clean or to be pushed into very obvious distortion and, as with so many analogue machines, it has that mysterious ability to glue the elements of a mix together in a way that simple digital mixing never seems to manage.

UA's model of the ATR102 electronic signal path includes the audio transformers, plus a choice of repro or sync head playback, along with multiple tape brands, tape speed, head configurations and calibration levels. What once were undesirable artifacts, such as hiss, hum, wow and flutter (which were extremely low on the original) and crosstalk between channels can be used creatively, and even the input stage has been designed to reproduce the saturation characteristics of the original hardware circuitry when overdriven. 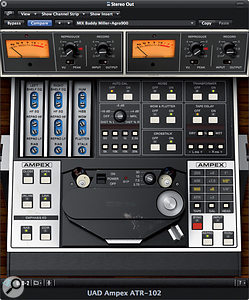 'Flipping the lid' gives you access to detailed calibration settings.

Controls on the plug-in enable the user to choose between input, sync and repro signal sources, four different tape speeds (3.75, 7.5, 15 and 30 ips), NAB, CCIR or AES EQ, the last being the only option at 30ips, and seven tape types, including the ubiquitous Ampex 456, of course. Note that at the two lower tape speeds, only quarter-inch tape is available. A nice touch is that when NAB EQ is selected, any mains hum you dial in will be at 60Hz, while CCIR gives 50Hz hum. At 30ips, where the EQ is automatically set to AES, you can still use the two EQ buttons to select the hum frequency you'd like!

An Input Gain knob sets the record level in conjunction with the Cal(ibration) button settings, while the heads can be switched to quarter-inch, half-inch or one inch without ever having to go near an alignment tape. Biasing and calibration controls allow auto or manual settings and of course crosstalk, noise, hum and wow and flutter can all be tweaked to be orders of magnitude worse than on the original, for the creation of special effects. Most of these geeky adjustments are accessed by pressing the Open button on the main panel, which lets you get at the calibration, biasing and artifact setting knobs. Tape machines were generally set up to match the input signal level to a desired magnetic flux suited to the type of tape in use. Here, there's an automatic calibration feature that matches the circuit settings to the tape and tape speed, offering four different settings, but the plug-in also provides manual calibration tools, including a tone generator, a distortion meter and a set of virtual alignment tapes — so even if you've never experienced the delights of aligning the real thing, you can practise here without fear of messing anything up. Those long winter evenings will simply fly by!

An inbuilt tape-delay feature with direct and delay level adjustment also makes it easy to set up ADT (automatic double tracking) effects. Note that when the plug-in is used mono-in/stereo-out, the input signal is sent to both channels, which may then be adjusted separately. A Link button gangs all the controls between the two channels, with the left channel controls serving as the masters.

By default, the output signal is sourced from the repro head, but you can switch to sync, which emulates the sound of playback via the record head and its electronics. This would normally only be used in the studio to keep overdubs in sync, because the frequency response isn't as accurate as from the repro head, but it can be an interesting special effect. Input mode, meanwhile, gives you the sound of the machine's electronics but without the tape — as you'd hear in real life with the recorder parked in live monitoring mode. There's also a mode labelled Thru, which is basically the same as bypassing the plug-in, except that in Thru mode the meters still function. 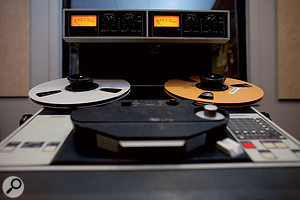 The original Ampex ATR102 is a much sought-after mastering recorder.

The easiest way to start using the plug-in is either to explore the factory presets, or choose a tape type, speed and EQ curve, then adjust the input gain to get as much level onto 'tape' as you like. The plug-in gain structure is set so that a -12dBFS input produces a 0dBFS level at the meters with the Repro level set against the red calibration marker. Separate controls are available for record and replay level, and the meters can be switched to VU or peak reading. A table of the manufacturers' calibration settings for each tape type is provided in the user manual, though you can switch to any of the four options if you prefer to experiment.

Using the default 'correctly set up' machine at tape speeds of 15 or 30ips and pushing the meters into the red but not banging them against the end stops produces the familiar sense of a more homogeneous mix, with subtly smoother highs and fatter lows; the amount of coloration is really very mild. If you want to exploit the 'head bump' to firm up the bass end, 15ips is the usual choice. As you'd expect, the lower the tape speed, the more obvious the tonal coloration, with 3.75ips sounding distinctly less pristine than the 15 or 30ips 'mastered' sound with which we're more familiar. Similarly, the higher the record level above 0VU, the dirtier the sound gets, and each brand of tape has its own subtle character. As you increase the input level, the sound at first gets fatter and slightly compressed-sounding, then as you go further it makes the transition through grit to absolute filth! While I wouldn't subject a mix to anything close to the filth setting, it might just work for sorting out that weedy snare-drum track.

While the obvious applications of this plug-in are for mastering and individual track or group processing, the extra control range allows plenty of scope for 'abusive' special effects such as highly distorted cassette-tape emulation with generous helpings of wow and flutter. The tape-echo function is also brilliant for creating traditional tape slapback delay — the maximum delay time available is one second, adjustable in one millisecond steps. Add a hint of wow and flutter to the delay and the result is pure magic.

I was also keen to see if I could coax any tape-flanging effects from the unit; it turns out that you can, but only to a limited extent. If you use the tape delay setting with the delay time dialled to zero with equal levels of dry and delayed sound, then crank the Wow control way up and the Flutter to around one third, you get a very plausible mild tape-flange effect. I was hoping I could use the mouse to apply hand pressure to the tape reels to create speed variations the old-school way, but sadly there is no option to do this. Nor is there any varispeed, which would also have been perfect for controlling flanging.

Unsurprisingly, the ATR102 is a fairly DSP-hungry beast: it isn't available at all for the older UAD1 card, but on my quad-core UAD2 card at 44.1kHz, I could have 16 of the things whirring away and taking up 71 percent of the board's capacity. 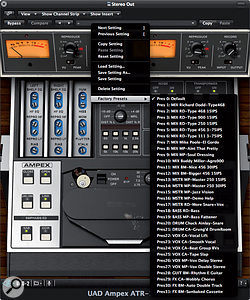 The plug-in includes a number of 'celebrity' presets from well-known engineers and producers.

As with most UAD plug-ins, this one has been modelled to a degree of accuracy that some might call obsessive excess. It comes very close to the sound of a top-flight tape machine, but has enough user adjustment to make it sound as nasty as you need — just screw up the bias, add some wow and flutter and you have a charity-shop cassette! The alignment options could form the basis of a very usable educational tool, while the tape delay section recreates those warm tape slapbacks perfectly. The delay time even defaults to the correct value for the selected tape speed, although you can change it to whatever you like. There are also subtle tonal differences between the tape types; I usually ended up back with good old Ampex 456. At least you know you're never going to suffer from 'sticky shed' syndrome (in which old tapes shed their oxide) when working with a plug-in!

On a practical level, my mixes definitely sounded more integrated and a touch more 'cuddly' when processed via the higher tape speeds, with the 15ips head-bump adding some welcome low-end support. The more overdriven settings work best on individual mix tracks such as drums and electric guitar. If you've always dreamed of mastering to tape but could do without the cost and the hassle, the ATR102 plug-in for the UAD card is about as close as you're going to get.

Perhaps the closest rival is Waves' Kramer Master Tape, which is modelled on a different Ampex machine, while the UAD range also includes the Studer A800 plug-in, although that, of course, emulates a multitrack tape deck. Alternatively, you might prefer to buy a used Revox or Tascam two-track machine and bounce your mixes to actual tape.

Once again, the UA team have shown their talent for meticulous modelling. This plug-in comes so close to the sound of a real high-end tape machine that any remaining differences are not going to affect your record sales!