The Vienna Symphonic team go forward into the past.

Jobbing media composers are occasionally asked to submit music for a historical (as opposed to hysterical) production. This poses a challenge: such projects often require authentic-sounding period instruments, and those Albie Donnelly Killer Horns soul licks which worked so well in a Geri Halliwell documentary a few years back might seem a bit out of place in a programme set in the court of King Henry VIII. If you’ve nothing suitable in your locker and Internet searches for Tudor Jazz-Funk Sax Loops draw a blank, don’t despair — VSL’s Historic Winds libraries may be just what you need. 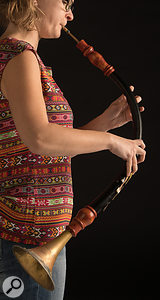 Oboe da caccia player Katharina Humpel.Though this blast from the past might seem a deviation from the Vienna samplemeisters’ usual agenda, the only real departure is that the instruments in question are between 200 and 400 years older than the sort of winds they normally serve up. In all other respects, these are typical VSL titles: recorded close up and personal in great musical detail, and covering a comprehensive range of articulations and dynamics.

Historic Winds I (6.6GB) is a collection of five instruments that will work together as a period wind band, while the nine-instrument, 8.5GB Historic Winds II expands the sonic palette with early trumpets and crumhorns. Buy both, and you’ll have a set of wind textures spanning the Renaissance, Baroque and early Classical periods. The libraries (which we’ll refer to as HWI and HWII) are formatted for VSL’s proprietary Vienna Instruments sample player, software for which is supplied free with every Vienna library. Also included is the free Vienna Ensemble mixing host, which enables you to run multiple Vienna Instruments and third-party plug-ins.

Flutes have been around since the Stone Age, evolving from simple bamboo instruments to today’s keyed concert flutes. At some point musicians decided it would look cool to hold their flutes horizontally and blow across the embouchure hole, and the Transverse (or side-blown) flute was born. HWI’s wooden Transverse flute has a pure, pleasant, slightly breathy tone, faintly reminiscent of a recorder but with a slight hint of ethnic flute about it. Its range is similar to a contemporary flute, though the straight, no-vibrato delivery reduces its potential for the expressive lyrical playing one associates with the modern instrument. 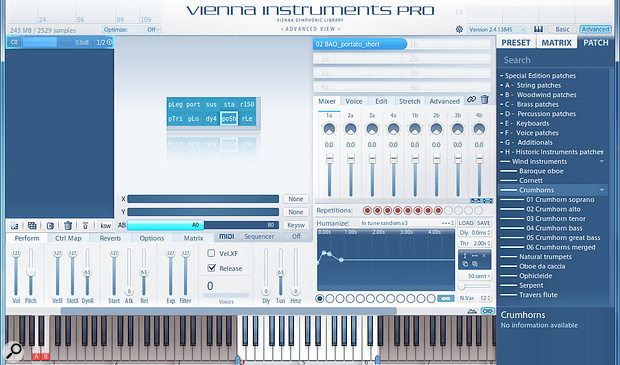 The Advanced view of the Historic Winds interface.

If played chordally in a virtual section, this historic item sounds much like any other sampled flute, but when you play solo lines with its legato ‘performance-trill’ patch, the Transverse flute really comes to life: the greased-lightning, liquid attack allows you to perform highly realistic trills, grace notes and even super-slick fast jazzy lines, all of which would have raised eyebrows in a Baroque-era band. On the other hand, a slow melody line played on the instrument’s simple, tranquil, unadorned sustained notes is equally appealing, evoking the atmosphere of a more innocent age.

Not being acquainted with 17th-century oboes, I was expecting something raucous and squawky from an historic instrument, but in fact HWI’s Baroque oboe’s pleasant, soft-ish sound is very easy on the ear. While immediately identifiable as an oboe, it lacks the modern instrument’s rather sharp, piercing tone, which in my book makes the Baroque version more versatile and easier to blend with other instruments. But if you want bite and penetration, you’ll find it in spades in the strong attack of the fiercely played sforzando samples.

The lower-pitched oboe da caccia (‘hunting oboe’) occupies a similar alto register to the cor anglais, albeit with a slightly reduced upper range. Its curved tube and brass bell have the look of a hunting horn, and while some have said it sounds like a horn heard from a distance, to my ears its slightly nasal, somewhat rustic tone sounds more like the high register of a bassoon. Either way, the great JS Bach featured two of these instruments in his St Matthew Passion, and if it’s good enough for Bach, it’s good enough for me. As with the Baroque oboe, a naturally mellow timbre sharpens into a nice reedy parp in the lively sfz and sffz performances. 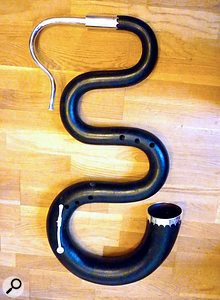 The scary-looking serpent, featured in Jerry Goldsmith’s soundtrack for Alien.If you suffer from a fear of snakes, the next instrument might give you nightmares. Called the serpent, it resembles a giant worm, being a long conical tube bent into a series of humped curves like a miniature Loch Ness Monster. This mad 16th-century contraption’s sound is hard to place: somewhere between woodwind and brass, reminiscent of a tuba but (like the oboe da caccia) with a hint of bassoon in the high notes. Subtle tonal shifts in the long notes add to the serpent’s mysterious, slightly fragile quality. Once you get used to its unique timbre, you could use it for wind bass lines in a quirky Bjork-style track, or, following Bernard Hermann and Jerry Goldsmith’s example, to suggest alien sounds in a sci-fi movie score.

The sole brass instrument in Historic Winds I, the Ophicleide resembles an oversized saxophone while sounding pretty much like a contemporary tuba, operating in the tuba’s pitch range but with a less resonant and bassy sound. While some critics have described the tone of the real instrument as unpredictable, this sampled version is controlled and steady — ‘strong and stable’, even. I found its fat sound nicely underpins HWI’s other instruments, whether playing supportive long notes or eighth-note rhythm patterns.

Moving on to HWII, we find a selection of Baroque trumpets along with some other treats. A bit of historical background: in the days when Russell Crowe led his army to victory against the Germanic tribes before pursuing a glittering career in Hollywood, Roman troops used to charge around playing ‘cornu’, brass wind instruments with no keys or finger holes. Baroque trumpets work on the same principle: though theoretically limited to playing the natural harmonic series (as heard in the ‘Last Post’ bugle call), talented players can play major and minor scales by modifying their breath and lips at the mouthpiece. 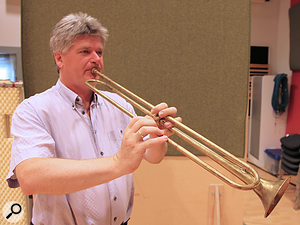 Natural trumpet player Fredy Staudigl.This performance technique enabled VSL to successfully sample a set of Baroque ‘natural trumpets’ over a full chromatic range. I enjoyed the trumpets’ pure tone, which ranges from pleasant, rounded quiet notes (somewhat more mellow than VSL’s regular orchestral trumpet) to a brilliant, blaring sffz. I was also pleased to find a subtle vibrato option, which no other instrument in these libraries offers.

For maximum flexibility, the producers separately recorded three natural trumpets in the keys of Bb, C and D. Each one is highly usable in its own right, and though there are subtle differences of tone between the three, the consistency of the performances makes them utterly homogenous: you can even swap them in mid-flow with no ill effects. Layering all three creates a very strong, magnificently triumphal trumpet ensemble which I recommend for your Gladiator Meets Alien trailer soundtrack (though if the Alien comes out on top, the above mentioned serpent might be a better option).

The natural trumpets’ samples are mapped with two additional low pedal tones tacked a sixth and major third respectively below their two-octave chromatic playable ranges, this being a real-life feature of such valveless instruments. While VSL’s sample mapping is entirely authentic, it would have been nice to have alternative patches that filled the gaps between the pedal tones and the main playable range by means of sample-stretching, if only for the sake of expediency. 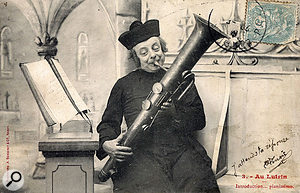 Monsieur le Curé and his Ophicleide, depicted in a popular French postcard series.Though I wasn’t there to witness its heyday, I’m told the cornett was a popular soprano wind instrument of the Renaissance and Baroque periods. Not to be confused with the trumpet-like cornet or the ‘delicious ice cream of Italy’ of TV ad fame, this leather-covered wooden pipe is built like a recorder with a horn or bone mouthpiece, six finger holes and a thumb hole on the underside. Its unusual tone could be mistaken for a softly played piccolo trumpet, but overall it lacks a trumpet’s brassiness. The cornett’s sustained notes have an engaging, personal and slightly fragile quality which works well in mournful melody lines; alternatively, you could dial up its staccatos for rhythm patterns, or program rousing hunting-horn calls with its excellent fast note repetitions.

Finally, we come to the crumhorn, whose idiosyncratic sound typifies the kind of bright, nasal timbre often associated with Renaissance music. The instrument is now often revived in contemporary folk and medieval ensembles, often in tandem with some impressive costume choices. VSL have sampled five different-sized crumhorns: the mighty great bass crumhorn sounds like a bassoon played through a fuzzbox, making a fabulously buzzy bass noise. Played in fifths in the bottom octave, its robust, unwavering tone reminded me strangely of Jon Lord of Deep Purple’s distorted Hammond organ. When it comes to the instrument’s 200 bpm note repetitions, words fail me. Suffice it to say, they’re very funny.

Pitched a fourth higher, the bass crumhorn has a similar tone to the great bass. The tenor instrument displays a reedier tone from G3 up, while the alto crumhorn sounds more like a raucous oboe or Middle Eastern reed instrument. Topping the range is the small soprano model, sounding like a melodica played at excessive volume. For your musical pleasure, the makers have mapped the five instruments over their complete C2 to F5 range, thereby creating the Mother of all Crumhorns on which the brave of heart can play two-handed chords. Global adulation and breathless plaudits await any composer adventurous enough to use this formidable, highly characterful racket in a composition.

Given the media world’s fuzzy musical sensibilities, I can’t guarantee the director of your historical production will like your crumhorns-and-serpents cues — he or she might ask for a dubstep score instead. However, for anyone seeking historical accuracy, I can say that these assiduously researched, beautifully played and meticulously recorded Vienna Historic Winds collections thoroughly nail the sound of their period instruments, bringing the authentic sound of Baroque music back to life at a fraction of the cost of a time machine.

All instruments enjoy good internal intonation and are tuned to A=440 concert pitch, so you can use them freely with other instruments. Should you feel the need, you can create alternative scale tunings (such as the ‘just intonation’ tuning system that prevailed in days of yore) by using the Vienna Instruments Pro player’s Scale Editor to globally change the pitch of certain scale notes.

While this would theoretically create a more authentic ‘period’ sound, users should be aware that such systems are key-specific, so a tuning that sounds sweet in the key of C will sound hideous if you play in F#. Solution: if you’re committed to using non-standard tunings in your compositions, use a separate instance of Vienna Instruments Pro for each key you want to play in.

If you need to create the authentic sound of instruments from the Renaissance, Baroque and early Classical periods, VSL’s pair of Historic Winds libraries will do you proud. Beautifully recorded, the instruments can also be used in contemporary settings which require unusual wind timbres.