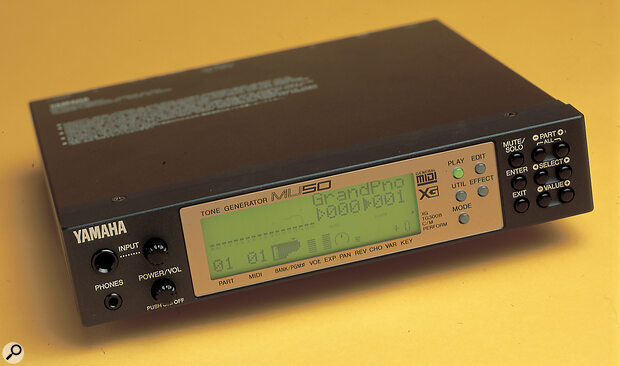 Two of Yamaha's most recent products, the MU50 synth module and the CBX‑K1 mini keyboard, are designed to compliment each other as the nucleus of a budget, GM‑compatible music‑making setup. Paul Nagle evaluates the pair, and considers the potentially confusing role of Yamaha's XG MIDI format...

You may be forgiven for viewing a new General MIDI synth in the same light as the latest TV series about a tough, New York cop who plays by his own rules — you just know you've seen it all before. However, Yamaha's latest module, the MU50, has a few original touches which aren't found in the average GM instrument. Featuring Yamaha's new breed of General MIDI, XG (eXtended General MIDI — of which more later), the MU50 is 32‑note polyphonic, has three simultaneous effects, a stereo audio input, 737 voices (according to the manual — I didn't count!) and 22 drum kits. Even taking into account that many of the percussion voices are repeated across kits, and that many of the additional sounds are variations on existing ones or require a switch into a different mode, there's still an awful lot to wade through.

The MU50 is packed into one of those small square boxes which seem designed to litter an otherwise neat studio. A rackmounting kit, the RK101, is available as an optional extra, allowing you to fit two 0.5U modules into your studio rack if you insist on keeping things tidy. The large, friendly LCD, complete with graphical representations of each instrument, is a welcome window to the edit menus. These are accessed via tiny buttons — there's no data entry knob or slider. In defiance of the constant moans of SOS reviewers and readers over the years, the MU50 is powered by an external PSU, which is about as large (and as welcome) as a modest‑sized rat nestling amongst your leads.

Like Yamaha's MU80 (reviewed in SOS April 1995), the MU50 boasts an external audio input — but unlike the MU80, the signal passing through the input cannot be processed via the internal effects, and is merely merged at the stereo ouput stage with the MU50 signal. A shame, as this would have really set it a notch above the competition. In addition to the standard MIDI sockets, the MU50 is blessed with a direct link to either a PC or a Mac, which is handy if you're on the move, or don't have sufficient free MIDI channels in your computer.

The edit pages give access to a series of simple menus, including that for the resonant filter. This is not accompanied by a dedicated envelope generator, but using Yamaha's XG MIDI controllers, you can make pretty dramatic sweeps and twangs without a lot of tedious messing about with SysEx. In fact, the MIDI spec is quite impressive, with pretty much everything you might want to change available for tweaking by MIDI controller information. When you do need to enter SysEx, there's no need to look in the manual — just double‑click on the enter key from wherever you happen to be and the appropriate codes appear as if by magic. If only all synths worked this way!

As with Roland's Sound Canvas synths, edits made are to the complete part. As a result, if you change patches afterwards, this does not reset any tweaks to filter or envelope — something to be aware of.

The Sounds are everything you would expect from a module in this price range, with a few outstanding instruments (pizzicato strings, vibes, organs, and some of the brass) and only one real dog (you guessed it — the bagpipes). For the most part, the rest are all quite usable and decent. There's an odd rasp in the loop of the Shakuhachi that didn't work for me, and the tubular bells have a strange Far Eastern feel, but on the whole, as a typical GM range of instruments, everything is as you'd expect. Unfortunately, this is the problem with the MU50 — there's just nothing to get excited about. I guess I hoped for more from XG — the various 'new' sounds accessed by MIDI bank select messages are, in many cases, not very adventurous variations on what's already there, and unless your sequencer knows about this 'standard', you'll need the manual to remind you which bank select and program changes are required to find the new sounds. Admittedly, there are some new samples (most notably the new special effects) that will be of use to the creators of multimedia applications, but on the whole, I think it's a shame that Yamaha have recognised the limitations of GM, decided to boldly deliver an enhanced version — and then wimped out like this. Future XG instruments may include more sounds, but the MU50 hardly pushes the barriers much further than Roland's GS — where are all the Alpine horns, digeridoos, nose flutes, and even vintage synth sounds? If there's room for two accordions in there, why not have some Moog and Mellotron samples?

Probably the most interesting area of the MU50 is its effects section, which offers up to three simultaneous processes. These are reverbs, chorus and a variation effect, which can itself be anything from a selection of reverbs, delays, chorus, phasers, overdrives and the like. I'm happy to report that the reverbs are not blessed with that metallic ringing quality which I have always associated with the built‑in processors on Yamaha synths. Effects levels can be set for each instrument and routed very flexibly indeed, giving a much wider range of assignments than any other GM instrument in the MU50's class. The variation effect is particularly useful for additional treatment of a solo instrument whilst not affecting the rest of the mix.

You can switch the MU50 between various modes to maintain compatibility with several other instruments, ranging from the Yamaha TG300 to the Clavinova. The most useful of these is the performance mode, which allows you to stack up to four sounds on a single MIDI channel, modify the filter, envelope and effects settings, and create a wide range of split, layered and velocity‑switched patches. Here was where I missed the filter envelope the most, since it would have greatly increased the available sonic palette. 32 preset and 128 user programmable performances can be stored, using any of the sound banks as a starting point.

If you're hell‑bent on owning a GM synth but still haven't managed to find one, the Yamaha MU50 offers better effects than most, a useful performance mode, and an audio input, all at a pretty attractive price. Although not revolutionary, it does deliver enough in addition to the basic General MIDI spec to make it an attractive proposition in many situations.

The CBX‑K1: Compact And Bijou? 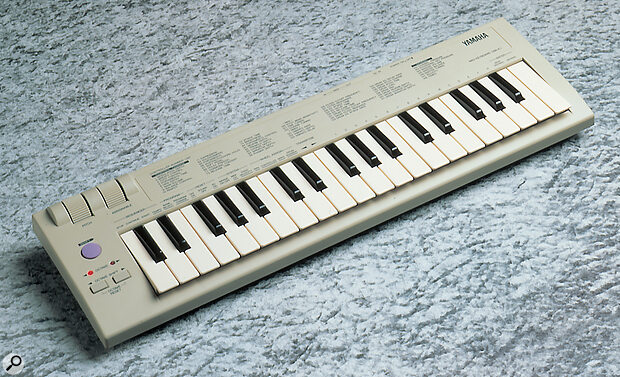 Brian Heywood has already mentioned this velocity‑sensitive controller in SOS July 1995's PC Notes column, as the CBX‑K1 is clearly designed for computer users who wish to enter notes into a sequencer in step time. However, the CBX‑K1 is also aimed at those with budget modules such as the Yamaha MU5, or even the MU50.

Physically tiny at just 20 inches long, the CBX‑K1 keyboard boasts a mere 37 mini keys, and may be operated via battery or a bulky external power supply. It doesn't have a sustain pedal input, but then you'll hardly be hammering out piano imitations on it anyway. On the plus side, the CBX‑K1 is capable of sending a whole host of MIDI controllers via an assignable wheel (including both mono and poly aftertouch) — although any assignments you make are reset on power‑off.

More useful is the MIDI input, which allows you to merge the MIDI output of a 'proper' keyboard with the data generated by the CBX‑K1. However, this does beg the question: why not just cut out the CBX‑K1 middle man? At this price, I think there are far better controllers available.

XG 'Scalability': Confused? You Will Be...

According to the manual, the MU50's external input is a part of XG that allows external signals to be added for real‑time participation. The manual goes on to give an example of an XG module which would 'allow you to create karaoke data that can automatically set the microphone echo used for playback'. Hold on a minute, though — the MU50 can't actually process external audio via its effects, so what gives? This could be where Yamaha's concept of 'scalability' comes in. Apparently, XG synths may differ in specification, for example with more voices filling up the holes in various banks, or totally new effects. Future expansion may result in considerable variations in machines bearing the XG label — so you may need to judge each individual XG instrument rather than merely relying on the XG stamp.

Of course, this means you can't actually describe the boundaries for the XG spec. Yamaha neatly circumvent the problem in the XG literature by using phrases like 'it significantly expands the number of voices supported', 'all XG machines are not required to support the full range of functions' and 'each XG machine will replay XG data in accordance with the machine's level of sophistication'. Er, right...

This shrewdly‑priced GM module has a few extras in the effects department, great MIDI control, and an external audio input. Although Yamaha don't break radically new ground, the additional XG voices do at least add some much‑needed variation to the tired standard GM selection, whilst still retaining full compatibility.