Analogue tape is enduringly popular as an audio recording medium, but do enough people know how to use it properly any more? Bob Clearmountain's experience suggests otherwise... 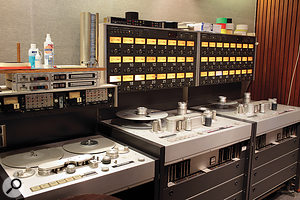 Everyone knows that, along with everything else, recording technology has drastically changed over the last, say, 30 years — although, judging by a couple of projects I've had to deal with lately, there are a few, possibly younger members of our industry who seem to be unaware of just how much it has changed. Recording on analogue tape is now considered simply the only way to get that cool old sound of the pre‑digital era. While this may be true, many of today's recordists and techs have either forgotten or were never aware of many of the techniques for dealing with things like analogue tape slippage and limited reel length, while recording a one‑hour or two‑hour live show that was also being filmed or video taped.

I've now had the great pleasure of mixing a number of such projects, filmed or video-taped and recorded during the 1970s and 1980s, for which I regret to report that the audio (recorded on 24‑track analogue, transferred to a digital DAW) and the picture (16mm film or video tape) would not sync. The analogue would gradually drift out of sync with the picture, at times being as much as two seconds out by the end of a seven‑minute song.

Even back in the '70s, film cameras had crystal‑controlled motors. The film was transported by sprockets that would ensure it was exposed at a consistent, correct speed. Analogue multitrack tape, though, didn't have this advantage. Tape tends to slip slightly as it passes between the capstan and the pinch roller, causing timing errors in relation to the film, and these are amplified if the tape is played back on a different machine. To get around the problem, there was something called 'Pilottone' (http://en.wikipedia.org/wiki/Pilottone). This was simply a 60‑cycle sine wave (in the US; 50 cycles in Europe) recorded on a track of the tape. It was generated either by a crystal‑controlled tone generator or simply a step‑down transformer plugged into the power grid, utilising the grid's 60‑ or 50‑cycle line frequency as a constant sync reference. When the tape was mixed, this signal would be patched into a device called a 'resolver' that compared it to the current line frequency (or a crystal‑controlled oscillator's sine wave), which in turn controlled the speed of the tape machine's capstan, resulting in the tape playing back at the exact speed at which it was recorded. Most 'modern' (as in '80s) synchronisers, such as Timeline's Lynx, also have the ability to resolve machines using Pilottone, while themselves being locked to a stable video house sync. Although it can be done, once the music has been transferred to a digital format, it's very difficult and time‑consuming to fix the sync discrepancies later.

So I must assume that in both cases either the person transferring the analogue tape to digital was simply unaware of this problem with tape and didn't know what that hum was on track 24, or was just too lazy to bother finding a synchronising device with which to resolve the tape machine while transferring. This problem is exacerbated by the fact that usually these old analogue tapes need to be baked before you can play them, and often this can only be done once, so it must be done correctly the first time. To fix this problem, my brilliant assistant, Brandon Duncan, spent many hours — or rather days — with Elastic Audio in ProTools, either stretching or compressing the multitrack files to match the rough audio track in the video transfer file. And, of course, there's a certain amount of audio degradation with any such process.

The other problem that's come up has to do with the fact that analogue reels of tape, even the 14‑inch ones, will record one hour at most. At 30ips, this is reduced to a half hour, so to avoid missing anything while changing reels, recording was usually done redundantly on two machines. The second machine was usually started around five minutes after the first one, so that when the 'A' reel was changed, the 'B' reel kept recording. This way, there would be no gaps in the recording, no matter how far past the curfew the band decided to rock. Well, for one such project I had been hired to mix, only the 'A' reels were transferred, so there are two major chunks missing out of the show. The 'B' reels may have been considered back‑ups or safeties, which of course they're not. They're actually continuations of the masters. So they're probably filed away in some other location with the good intention of keeping them safe. Because these reels couldn't be found, we had to painstakingly sync parts of a different night's live performance to the video that was only shot on one night. It took a great deal of manipulation to get the tempos (which happened to be insanely different) to match, and to ensure that the singer appeared to be singing in the same language!

In conclusion, it is imperative that everyone who deals with multitrack analogue to digital transfers for a film or video project does the following:

• RESOLVE THE TAPE! That hum on track 24 isn't just a synthesizer with a problem! There's a very important reason it's there, so please use it. If there's SMPTE or EBU timecode on the tape, lock the tape machine to timecode from the DAW session you're transferring to (not the other way around!), using a synchroniser. When asked, the people that did the transfers for both of my projects (one in the US and one in the UK) felt that digital technology or the video editor would somehow easily be able to deal with the sync problem. Wrong answer!!!

• Before transferring, make sure you have and are transferring all the reels recorded at the show, both from the 'A' machine and the 'B' machine. The reel numbers usually denote this with the prefix or suffix 'A' and 'B'. If you don't have access to one series of reels, either find them or inform everyone involved of the problem, so that someone else can find them as quickly as possible!

• Don't assume anything. If you have the slightest question or problem — perhaps you don't have access to a synchroniser, or don't know how to operate one — find out who's mixing the project, call him or her and ask them what they would like you to do.

• Try to make sure that the A-D converters are of the absolute highest quality.

• Don't bother transferring to a sample rate of 192kHz. It's really no improvement over 96kHz, which is pretty much perfect when using high‑quality converters. Using a higher rate can only make any digital system somewhat less stable.

I originally wrote this article several years ago, when I'd had the same experience on two projects. I decided not to publish at the time, as I wanted to avoid condescending or scolding. Since then, though, I've come across the same infuriating problems several times, so I've decided to go ahead and let this be printed. If you are fully aware of how to properly synchronize an analogue multitrack tape and the absolute importance of doing so properly, I'm not speaking to you. My focus is more on those that have little or no experience with analogue recording, or have simply forgotten. 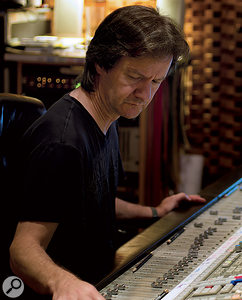 Bob Clearmountain is an award‑winning producer and music mixer who has probably worked with as many big names as you've had hot dinners, including the Rolling Stones, Bruce Springsteen, INXS, Bon Jovi, Robbie Williams, The Cure... and many, many more. For a full discography, go to www.discogs.com/artist/Bob+Clearmountain.