The Expander and Equalizer modules have been enabled and set to remove room ambience from drums.

Spice up your drum tracks with Sonar’s built-in plug-ins.

Drums are a crucial part of today’s music, so there’s always a quest to come up with new and different ways to make more interesting and flexible drum sounds. Here, I’ll be talking you through some of my favorites.

I generally like drums with room ambience — but if there’s too much, you can reduce the ambience amount using the expander in Sonar’s PX-64 Percussion Strip. The conventional expander application is to set a threshold where, when the input is below the threshold, the level decays rapidly. However, when removing ambience, the problem with this approach is that the ambience remains part of the signal until hitting the threshold, then disappears. Ideally, the ambience would ‘track’ the drum’s natural decay so that as the drum’s level gets lower, so does the ambience — thus masking it.

To do this, insert the PX-64, enable the Expander, and turn the Threshold and Ratio controls fully clockwise. You likely won’t hear any drums at all. Now slowly turn the Ratio control counter-clockwise. A small ratio, in the 1.2 to 1.5 range, will keep the peaks and the bulk of the drum decay intact, but reduce any ambience or leakage.

Note that if the hi-hat is at a relatively low level, the expansion might make it a little too low. There’s an easy fix: in the routing section, position the EQ before the expander. Use the High Mid band to boost at around 8 to 9 kHz, with Mode set to Classic, and about 3-4 dB of boost. Tune the EQ frequency to provide the best trade-off between maximum hi-hat ‘pop’ and keeping the other drum-related high frequencies under control.

Hard clipping on drums can sound like the best limiter of all time — but it has to be the right kind of clipping, or the drums will have nasty, splattering distortion.

For this application, the Tube Saturation ProChannel is the only option that does the job right because of the ‘Type’ switch. Position 1 gives the usual distortion sound you don’t want, but position 2 leaves the highs intact while saturating the low frequencies. This technique gives a big, beefy sound with a much higher average level that can really cut through a mix; it works well on mixed drums, but is even more flexible when applied to individual tracks, particularly kicks and toms. Note that it can also bring up room ambience.

These settings work well as a point of departure for boosting drum loops with saturation.

Start with Tube Saturation bypassed, play your drums, and note the peak level. Now set the Tube Saturation Output control to 0.0dB, Drive at around 80 percent, Input fully counter-clockwise, and then enable the effect. Start turning up Input while watching the peak meter reading, until the peak level is the same as when Tube Saturation was bypassed. The drums will sound much louder due to having a higher average signal level. To clean up the sound, reduce Drive; this will allow for higher peaks, so you’ll need to bring down the Input control to maintain the same peak level.

In dance music, the kick is king — but the sonic consistency can get a little boring, especially if you use processors like saturation to make the kick hit really hard. Because that’s what I do, I’ve been looking for a way to soften the attack as needed, so that when it’s time to come crashing back in from a less intense section the kick can really kick. 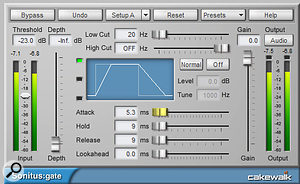 A little envelope attack time can have a profound effect on a kick drum’s sound.

Assuming your kick is on a separate track and has consistent levels (this won’t work on mixed drums), the way to do this is with Sonitus:fx Gate. Edit the Threshold so that the green LED to the left of the envelope graph illuminates when the kick hits, but lights red in between hits. Set the Hold and Release to around 10ms; you can get by with Lookahead set to 0ms, but adding a little bit — even just 0.5ms — can avoid clicks on the kick transient.

To soften the kick, increase the gate’s Attack time. The usable range is from 0 to about 30 ms. Attack is automatable, so you can add considerable expressiveness.

You’ll also find a useful wah-wah processor in the folder ‘Sonitus Effects That Are Underappreciated Just Because They’re DirectX’ (or wherever you keep your DirectX plug-ins). As a parallel effect, Wahwah can add a sweet, tight, modulated effect that tracks the drum track’s dynamics. This technique is equally applicable to full mixes as well as individual tracks.

After inserting Wahwah, set Mode to Triggered. I like having the Wah parameter up full, as that gives the widest range and makes sure the highs are processed, but of course the ‘right’ value is a matter of personal choice and musical context. Adjust the Threshold visually so that the meters go below the Threshold knob periodically. This provides a good starting point. 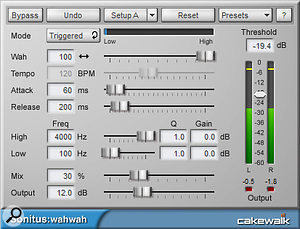 This shows suggested Wahwah settings for a mixed drum track.

A fast attack can give a ‘crack’ on the initial hits, but I prefer times around 50 to 70 ms. Set Release to provide the best dynamics tracking; 200ms is a good start. Lower Q values give a more organic, less ‘gimmicky’ sound, so I set them as low as possible. Finally, Mix controls the balance of the filtered effect with the straight drum sound. You don’t need much to add a fun effect — 30 percent is enough to add some filtering, but feel free to get more extreme. Don’t forget to re-visit the Threshold control and optimise it; because all of these controls interact, you may want to tweak the other controls after adjusting the Threshold.

The Loop Construction window lets you change the timbre of individual rhythmic ‘slices’ — for example, lower the pitch slightly at the beginning of the first and third measures to make the kick ‘thud’ a bit more, but raise the pitch on one of the snare hits to emphasise it. This processing affects whatever is in that slice, so if something like a cymbal crash extends over multiple slices, and each slice has pitch processing, the cymbal’s timbre will change while it decays. On the other hand, this lets you add a ‘sample and hold filter’-type effect that can be quite fetching.

Open a drum loop in the Loop Construction window and, assuming the clip isn’t already a Groove Clip, choose Clip / Loop On/Off. Set the Threshold to 0, then in the rhythmic value field, to the left of the Threshold field, choose the value for each slice (eg. 16th notes). 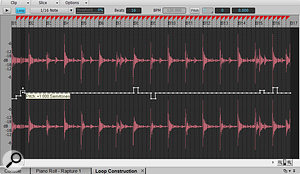 Next, from the Slice drop-down menu choose ‘Show/Hide Pitch Envelope’. This isn’t an envelope in the conventional sense of rising and falling, but lets you adjust each slice’s pitch. Hover the mouse over the slice’s envelope to see a readout of that slice’s pitch offset. Note that the resolution is in semitones. Click-drag up or down to raise or lower pitch, respectively.

You don’t have to change timbre on a slice-by-slice basis, however — you can change the entire loop by editing the two Pitch fields, as well as setting the resolution down to one cent. Don’t enable the Pitch button (that’s about following pitch markers), just enter the amount of change. For example, if you enter -3 and 0.000 in the two pitch fields, the timbre will drop by three semitones. This will make cymbals sound dull, but give a really ‘heavy’ sound to the other drums...or you can raise pitch to ‘tighten’ the timbre. Either way, it’s a beautiful thing.

You can hear some of these techniques in action, by going to http://sosm.ag/aug15media.