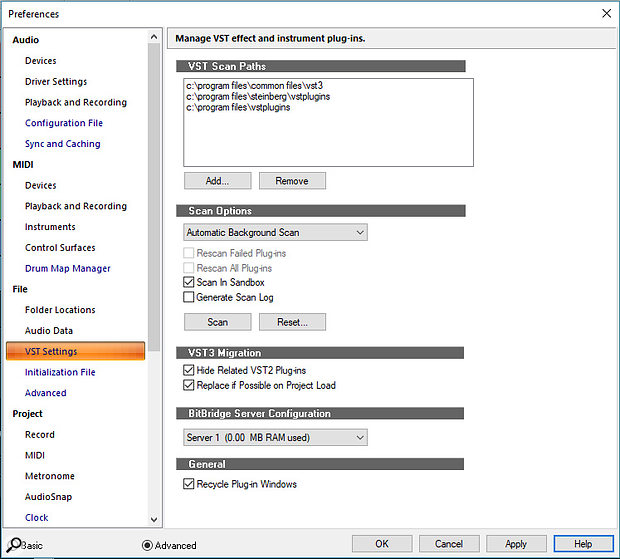 Preferences is the main location for editing global plug-in characteristics, including locations and scanning. behaviour.

Tidy up your plug-in menu in Cakewalk.

Plug-ins are addictive — and as they accumulate, the need to manage them increases. Fortunately, Cakewalk by BandLab has several plug‑in‑related tools that can help smooth your workflow.

For scan options, 'Automatic Background Scan' is unobtrusive, doesn't add any time to program startup, and ensures Cakewalk won't miss a new plug-in you've installed — even if you install it while Cakewalk is open. If you don't want to see the scanning notification that starts when you open the program, choose Manual Scan. However, this won't make the program load any faster, and you'll have to remember to scan after installing or removing a plug-in.

The 'Scan in Sandbox' option slows scanning somewhat, but isolates the scanning process. If there's a problem with a plug-in, Cakewalk carries on regardless of the scan's status. This means you can correct any issues later, rather than hit a speed bump in the creative process.

There's also an effective solution for when your plug-ins seem hopelessly confused, as can happen after updates or Windows issues. First, tick 'Scan in Sandbox', then click 'Reset', acknowledge that you understand any plug-in configurations will return to their defaults, and sit back while everything re-scans. This solves most of the "my plug-ins are acting weird!" issues.

As to VST3 Migration, in an ideal world you would just tick 'Hide Related VST2 Plug-Ins' and 'Replace If Possible on Project Load', and be done with it. However, there are differences between VST2 and VST3. For example, some VST2 amp simulators can accept Program Change commands to switch presets, but their VST3 versions cannot. Although VST3 was introduced in 2006, companies were slow to adopt it because VST 2.4 worked fine — and while the VST3 world has become quite stable, there are still instances where a VST2 version is preferable. I ticked the VST3 Migration options, but if a VST2 version works better overall, I rename the VST3's .dll suffix to .dxx. That way, Cakewalk loads the VST2 version instead.

The BitBridge server configuration options are explained well in the Help section, but hopefully you've done everything possible to eliminate 32-bit plug-ins, as this promotes stability in x64 systems. (True story: at a conference, the developer of a DAW that dropped 32-bit plug-in support was asked by an attendee about the best way to run a 32-bit plug-in within the program. After a pause, the developer said "Ask the manufacturer to create a 64-bit version." That may sound snarky, but it makes the point.)

Finally, the 'Recycle Plug-ins Window' option caused confusion initially, because engaging it meant that opening a new plug-in closed any already open plug-ins. To defeat this behaviour, untick the box. I prefer to leave it ticked — you can still open a new plug-in window while leaving the others untouched by holding Ctrl when opening a plug-in.

The stand‑alone Plug-in Manager (PIM) application is being phased out as more user-friendly functionality is added to the built-in plug-in Browser. According to BandLab's Noel Borthwick, the only reason the Plug-in Manager (which isn't being maintained or updated) is still being included is because you can use it to create plug-in layouts and exclude plug-ins. It's also the only way you can create nested folders, or set plug-in options simultaneously for all plug-ins in a selected folder.

Excluding plug-ins is convenient to prevent Cakewalk from scanning a plug-in that's keyed to a different program, but here's a cute trick: Cakewalk ships with four plug-ins (VX-64, PX-64, TL-64, and Boost 11) excluded. Choose Utilities / Plug-In Manager, click on VST Audio Effects (VST), then tick Show Excluded. Highlight them, click on Enable Plug-In, and if they weren't already installed because you had Sonar on your computer, you'll have four new plug-ins. VX-64 and PX-64 are particularly wonderful.

The VST drop-down menu's Plug‑in Properties page reveals many editable parameters. In the background, VX-64 has been removed from its default position in the Excluded Plug-ins list, so it's now available for use.

Two of the PIM's formerly most useful functions are available elsewhere. Scan VST Plug-ins can be done from Preferences (although it's not done in the background, so you have to wait for it to complete), as can setting the Scan Options. To access a VST plug-in's properties (the DX plug-ins don't have an equivalent function), click on the VST plug-in's drop-down menu.

And while we're covering the drop-down menu, don't overlook the ability to save and load FXP presets, or the cool Randomize parameter. It often produces junk, but every now and then, randomising plug-in parameters can spark creative thinking. Also note that under VST Plug-in Properties, you can change the plug-in name that's displayed in the FX Rack. This is convenient when a company uses their name as a prefix to all their effects, or to shorten names so they fit easily within the FX Rack label. Clicking the Details button shows the plug-in's path so you know the folder from which it came, as well as the plug-in's unique ID.

One final point about the PIM: layouts are saved as PGL files that you can back up, or transfer to other computers running Cakewalk. If you open it as a text file, you can change names (and if you've changed the name, see the original one), as well as check on the CLSID identifier. The Browser saves its layout and category information to a file called Library.db, located at C:\Users \[your name] \AppData \Roaming \Cakewalk \Library, which you can also transfer among computers and back up (which you need to do if you ever have to reinstall Cakewalk, and want to recreate your various customisations).

You can organise plug-ins within the Browser by selecting 'Sort by Category' from the Plug‑ins drop-down menu. (Not surprisingly, 'Sort by Type' and 'Sort by Manufacturer' don't allow reorganisation.) 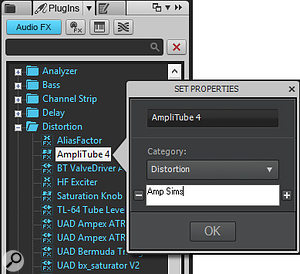 A new category is about to be created, and AmpliTube 4 will be copied to it.You can move or copy a plug-in to a different category, so the same plug-in can show up in multiple categories, or in new categories. For example, IK's AmpliTube 4 defaults to the Distortion category. I consider that category more suited to saturation, analogue tape effects, and the like, so I'd rather have it live in an Amp Sims category.

If you don't want the plug-in residing in its original location, right-click on the plug-in, and you'll see the locations listed where the plug-in appears. In a field that's preceded by a minus (-), use the drop-down menu to select the category from which you want the plug-in removed. Click on OK, and the plug-in will disappear from that category. 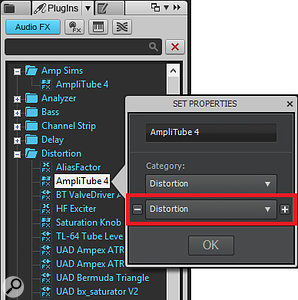 Selecting the category in a field with a minus (-) sign, then clicking OK, removes the plug-in from that category.If a plug-in doesn't exist in at least two places, then you can't delete it from its original location. This is a safety feature so you can't remove a plug-in and not get it back. To make a plug-in go away, you still need to use the PIM to exclude the plug-in manually.

There are some useful keyboard shortcuts for the Browser. To open the Audio FX, MIDI FX, Virtual Instruments or ReWire tabs, click Ctrl+A, Ctrl+M, Ctrl+I or Ctrl+R, respectively. You can also use a variation on this to close all open folders. For example, if you have a lot of folders open in Audio Effects because you were moving multiple effects into a new category, select a tab that's not Audio Effects, then type Ctrl+A. When you return to the Audio Effects tabs, all the folders will be closed.

Lastly, any Browser categorisation changes apply only with 'Sort by Category' selected. However, you can convert this to a layout. Select 'Manage Layouts' from the Plug‑ins drop-down menu, and after the PIM opens up, the layout will reflect your customisations. You can then save it as you would any other plug-in layout from the PIM.