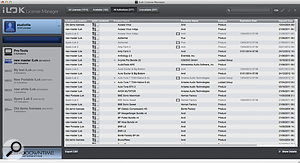 The new iLok License Manager software is much more powerful and flexible than the browser-based tool it replaces.

For many years now, both the Pro Tools software and most third-party plug-ins have used PACE's iLok copy-protection dongle. Until recently, licences on iLok keys were downloaded and managed within our web browsers using a special extension. This worked well for some people, but has been plagued with browser compatibility issues, meaning that Firefox, for instance, has been unsupported for quite a while now. The functionality of the system was also limited in various ways, making it impossible, for example, to delete demo licences once they had expired.

PACE, the manufacturers of the iLok, who also manage the iLok.com site, have been working very hard over the past year or so to resolve the limitations of the browser-based user interface. The result is a dedicated application called iLok License Manager, which completely replaces the web browser interface and adds significant functionality into the bargain, as you can see from the table.

Freed from the limitations of working within a web browser, the new License Manager also offers a much improved user interface. By default, your licences are presented within four tabs: All licences, Available licences, Activated licences, and Unavailable licences (ie. those which have expired or been transferred to another user). In addition, PACE have added a Search feature, making it easy to track down individual licences in a busy account.

The Zero Down Time option still costs $30 per iLok per year, but now includes coverage for theft and loss. The way this will work is that all licences on the nominated iLoks expire every 90 days unless the iLok checks back in with your account. All the user needs to do is open the License Manager application every couple of months, and you'll no longer have to worry about the loss or theft of a very small iLok that can in effect be worth thousands of dollars or pounds.

The fee for transferring licences between accounts remains at $25, but Team iLok have capped these transfer fees at a maximum of $50 per transaction, so you can shift many plug-ins in one go without incurring horrendous expenses. Locked bundles (called Locked Groups from today forward) are also capped at $25, so they can be treated as single licences from the transfer point of view.

Another welcome feature is that it is now possible to activate a licence from within an application or plug-in, without the need to go online or even use the new License Manager. If the plug-in vendor enables the feature, they can walk the user through accessing their account or using activation codes from inside their product after launching the un-activated application or plug-in. Expect to see this more and more as software vendors release new products.

An interesting development is the option for software vendors to offer licences that are managed through License Manager but which activate to a computer rather than to an iLok key. These licences can be activated and de-activated in similar ways, and moving them to an iLok USB Smart Key will always be an option. However, because machine-based licences are not as secure as iLoks, and problems can arise when users lose their computers or give them to someone else without deactivating a licence first, it may prove that software vendors only offer this feature on their cheaper products.

Behind the scenes, PACE technology is now part of the AAX protocols, adding another layer of copy protection because the iLok is no longer checked only when Pro Tools is booted. Pro Tools 11 and associated plug-ins check that the iLok and licences are present during use too. 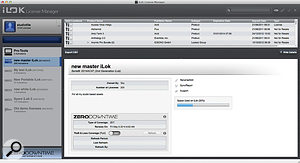 Zero Down Time has now been enhanced to offer optional Theft & Loss cover.

As we all know now, the migration from the old iLok management system to the new one didn't go smoothly. PACE originally announced that iLok.com would be down for 24 hours, but the iLok team ran into major problems from the start of the process, and in the event it was over 48 hours before users could download the new License Manager. Even then, further problems quickly became apparent, with the iLok.com site being swamped by activity, and some users ran into a problem where permanent licences that they had paid for were being displayed as 'Temporary'. The situation wasn't helped by widespread negative posting on social media networks and forums.

The temporary licence issue, along with several others, was soon addressed with an update to the Sync/Repair process, but many users were also frustrated by the lack of speed and responsiveness of the iLok License Manager software. I was one of those affected users, finding for example that I had to wait several minutes before I could even sign in to License Manager. The Sync/Repair process itself then could take at least five minutes, especially if there were a lot of licences on your iLok. For some people it never completed, mainly because dodgy Internet connections would lose communication between the License Manager and the iLok servers. I knew of colleagues who had 'lost' over 200 licences, while six of my own had reverted to my iLok account in such a way that I was unable to get them back onto my iLok, so couldn't use those plug-ins with Pro Tools.

Ultimately, though many users experienced similar problems, I have not come across anyone who lost licences permanently, and the vast majority of the issues were resolved by software updates towards the end of June. However, these experiences do highlight some shortcomings in the design of the License Manager application, especially in the way it handles poor Internet connections and displays feedback as to what is happening: many users have found themselves staring at a program that is apparently doing nothing for minutes on end, wondering whether it has crashed. They also reflect badly on PACE's testing: there was no beta programme for the new system, and in-house testing did not anticipate the problems with weak Internet connections and overloaded servers.

What Can We Learn?

My feeling is that PACE need to rethink how they handle problems from the user's perspective, and put in place a more comprehensive support system which is more user-friendly and person-focused, employing language and protocols that normal users can relate to and understand. They also need beta testing programmes to iron out problems before they impact on end users. As users help PACE to be more user-focused, we can do our bit by being polite and not rude, asking nicely and not shouting and demanding the world, and in response, PACE can communicate with us in plain user-friendly language!

At the end of the day, however, the new system really is much better than the browser-based system it replaced. It is at last possible to transfer licences off physical iLoks and into our iLok accounts 'in the cloud'. Our iLoks no longer have to fill up with useless expired demo licences we can't do anything about, ZDT covers the possibility of iLoks getting lost or stolen, and PAC have revised the charges for transferring licences between accounts. It's a great improvement, and I suspect that by the time you read this, all the problems will be a dim memory.

License Manager Vs The Old Way