Drummer is designed to effortlessly give you realistic acoustic drum kit performances. However, its intelligence in generating drum performances also lends itself to producing contemporary and creative electronic beats in real time.

To give your Drummer performance an electronic feel, just reassign the software instrument triggering the performance from the default Drum Kit Designer instrument, which loads when you create a Drummer track, to any electronic drum kit of your choice. In the Library, you can select any patch from the category labelled Drum Machine as these are all patches created with Ultrabeat kits. The first patch in the list, Adept Machine, is a good place to start. When you click the disclosure triangle in the track header for Adept Machine in the Main Window, you'll see the patch is a Track Stack playing from Ultrabeat. Each drum voice is automatically routed to its own subtrack and mixer routing. 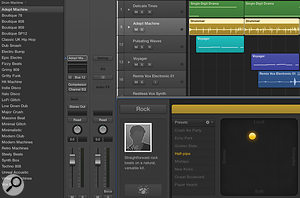 Logic's Drum Machine patches in the Library using Ultrabeat can be assigned to the Drummer feature.

You can actually use any drum machine in real time with the Drummer feature. That means you can use any of the factory Ultrabeat kits, any custom drum kit you've made with the EXS24 or Ultrabeat, or a drum virtual instrument from another manufacturer. You can even trigger an external hardware drum machine by using the External Instrument on a software instrument channel strip, which I'll go over later in this workshop.

Cycle the first region and play with the puck in the XY grid. Move it all the way up to add complexity. Experiment with different variations on the Kick and Snare: maybe switch to half time with the Kick and Snare variation on the far right, try different variations on the hi-hats, or play with the Fills knob. Click the Details button on the far right and adjust more of the nuance of the groove. One of my favorites is the Feel knob set toward Pull to really lay back on the beat. 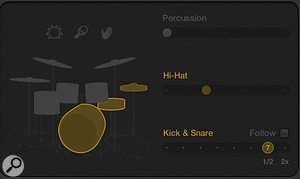 There are eight Kick & Snare variations available, the last two of which are half-time and double-time patterns. 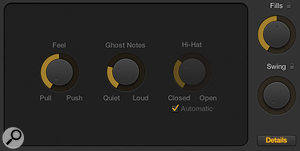 Change the instrument back to Drum Kit Designer. In the Library, go back to the Drum Kit category and select that default kit, SoCal. While Drummer is well suited to creating performances quickly under your musical direction, you can edit Drummer performances in the traditional MIDI editors. Control-click any region, select 'Convert' then 'Convert to MIDI Region'. It should sound exactly the same. Even though you are converting the Drummer performance to MIDI data, it's still playing out of Drummer, specifically the Drum Kit Designer software instrument. 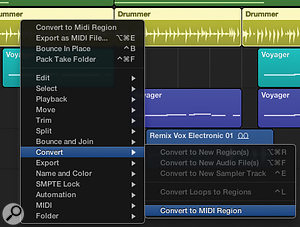 You now have access to all of Logic's MIDI editors and MIDI features for this performance. Select the Piano Roll Editor and try adjusting a few note velocities. For example, select the ghost note snares at the end of Bar 1 that are very quiet and adjust the Velocity slider to make them more prominent. You can also change the quantise properties on any individual notes by using the controls on the left side of the editor; for example, try selecting the hi-hats then drag the Swing slider.

When you're done editing, leave it as MIDI data. If you want to make edits with the Drummer Editor, you can convert the region back to a Drummer track by control-clicking on the region and selecting 'Convert to Drummer Region'. However, this will revoke any changes made in Logic's MIDI editors, so it's best to complete any performance adjustments in the Drummer Editor before converting to MIDI. 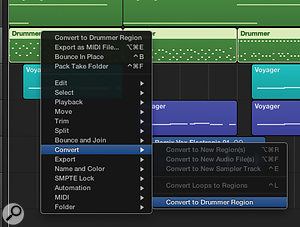 Drummer performances actually follow the standard GM Drum Mapping protocol, a solid MIDI standard since the '80s. That explains why, when you drag a Drummer region to an Ultrabeat Kit, the kick pattern is played back by a kick, the snares by a snare, and so on. Try this with Drum Machine's Indie Disco kit.

Sometimes the GM mapping may not be exactly what your project calls for. If you've reassigned the instrument to one of your own custom drum kits and do not want to use the GM mapping, here's a trick using the Step Editor, which is the redesigned Hyper Editor.

1. Select the first Drummer region, control-click, select 'Convert' from the menu and then 'Convert to MIDI Region'.

2. Click the Step Editor tab. This editor is very powerful for writing all kinds of MIDI data. You can just drag the Pencil tool across any lane to adjust a parameter, for example, to introduce panning.

3. Go to the Lanes menu and select New Lane Set for GM Drums. Now you can see all the individual Drum Voices. They're even properly named in the track headers inside the Step Editor.

4. You can easily draw additional note events for any drum voice by using the Pencil tool, if you want to.

5. Here's the cool part: Double-click on a track header and a window opens to reassign the drum voice. For this example, double-click the Snare's track header in the Step Editor. 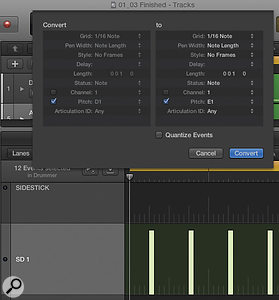 You can remap MIDI notes in your selected drum instrument from Drummer's GM mapping using Logic's new Step Editor. You can see on the left under the Convert column that the Pitch is D1.

6. Switch the Pitch in the right-hand column to E1, which will be easy to hear. It sounds like a rim hit.

You can see the new lane has been created on the next track, just below in the Step Editor.

It's possible to trigger a hardware drum machine by selecting the External Instrument in the instrument list on a Software Instrument track.

You can also double your Drummer track, with all its rich performance data, to play back through a third-party drum virtual instrument very easily.

3. Assign it to any of your other virtual drum machines then choose one of the Drum Machine patches again, perhaps the same Indie Disco kit used above.

Follow Rhythm is another very cool feature of Drummer that can really add to the tightness of your groove — acoustic or electronic. This allows you to select which track in your song or project Drummer will follow intelligently, and make musical decisions on how the kick and snare will follow it from region to region. If the track you select to have Drummer follow is very syncopated, you'll hear a tight and musical result. Here's how:

1. Try the Drummer named Nikki in the Alternative genre, with the Discotheque preset using any of your favourite electronic drum machines, virtual or hardware. The pattern is pretty steady with a 'straight ahead' feel. Now add the Apple Loop 'Runway Synth Bass' to the next track.

2. Tick the Follow Track tickbox in the Drummer Editor, next to the Kick & Snare variations slider in the bottom right of the window, to follow the Runway Synth. Zoom in to see the updated performance in the Tracks area.

3. Cycle bars 3 and 4. Toggle between deselecting then re-selecting Follow Rhythm and watch the Drummer performance in the Tracks area update. Notice how much tighter the rhythm is!

4. Once you enable the Follow Track tickbox and hover your mouse over the track name selected to follow, you'll see that it's a pop-up menu. You can choose any track in your track list for Drummer to follow. Click-hold on the track name to make another selection. Again, you won't see the menu until you hover under the Follow tickbox.

Keep in mind that Follow Track is only for the kick and snare of your Drummer performance so it makes perfect sense that it's located next to the Kick & Snare variations. Also, this is a region-based setting so, for example, your Drummer region could potentially follow the feel of your bass line in the chorus and your guitar or keyboard performance during the verses. Follow Track is another example of Drummer's intelligence to respond to musical nuances in your project from one region to the next.

Drummer offers an amazing new way of creating realistic drum tracks that sound and feel like there's a professional drummer in the room. Combined with Logic's powerful MIDI editing tools and electronic drum kits inside or outside the Logic suite, you're able to evolve the meaning of having a modern drum track.    .