A new program makes it possible to use your favourite 32-bit plug-ins in any 64-bit DAW. 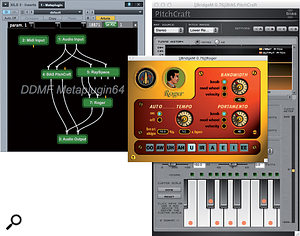 Say hello to your new best friend. Metaplugin (in conjunction with jBridgeM) currently looks to be the most reliable and cost-effective way of running 32-bit plug-ins in 64-bit DAWs like Logic Pro X. Its flexible MIDI and audio routing abilities make it hugely useful in any DAW, though. Here I'm running a bunch of languishing (or defunct) 32-bit VSTs in the 64-bit version of Presonus's Studio One 2.

In last month's Apple Notes I suggested a few ways that Logic Pro X users could continue to use 32-bit plug-ins, now that the application no longer supports them. One approach involved opening virtual instrument AUs in third-party host applications. Another used the third-party utility jBridgeM to generate 64-bit 'wrapped' versions of 32-bit VST plug-ins, ready to be hosted in Plogue's Bidule application or plug-in.

Since then a few more solutions have emerged, but by far the most promising is this one, suggested by a user (thanks TreyM!) on the KVR web site. It also relies on having VST versions of your 32-bit AUs available, so it's possible you might need to do a bit of reinstalling if your setup is otherwise Audio Unit-only. Then you'll still need to splash out a few quid on jBridgeM at jstuff.wordpress.com and make 64-bit versions of those ageing VSTs. But the crucial piece of the jigsaw is the use of the $39 Metaplugin from www.ddmf.eu, an unusual plug-in that exists to host other plug-ins. And as we'll see in a moment, it's a useful thing to have for any DAW, not just Logic.

First things first, though. Assuming you've already made 64-bit versions of your 32-bit VSTs, and Logic is booted up, create an instance of MetapluginSynth on an Instrument track. Then in its, mostly empty, black plug-in window, right-click and choose 'Load plug-in'. This gives you a dialogue box in which you navigate to your jBridgeM-wrapped VST plug-ins to choose one directly. By default they'll be in Users/[your username]/Library/Audio/Plug-Ins/VST, and that's a problem, because user Library folders are hidden in OS 10.7 Lion and later. It's easy to get around this though: with the dialogue box open type '~/Library' (that's the 'tilde' symbol, by the way) to jump directly into the hidden depths. You can then click through the hierarchy as normal: Audio/Plug-ins/VST. When you see the 'PluginsBridgedFor64BitVSTHosts' folder that was created by jBridgeM you might consider dragging it into the upper part of the dialogue box's sidebar, so you'll have one-click access to it in the future. Finally, open the folder, choose your wrapped plug-in and click Open (or indeed, just double-click it).

In the Metaplugin window your synth should appear represented as a green box. Click and drag a virtual cable between the orange 'pins' on the MIDI Input box and your synth. Then click and drag cables between the synth's white audio output pins and those on the Audio Output box. Virtual connections now made, you should be good to go, and if you double-click the green box representing your synth you'll bring up its user interface. The 'Load program' button in the window's title bar is there for choosing presets on synths that don't have their own preset management systems.

Hosting audio effects plug-ins in Metaplugin is a very similar process. This time you choose the straight Metaplugin plug-in in an insert slot. Right-click and choose an effect plug-in as before. And this time drag cables from the Audio Input green box to your plug-in's green box, and then from the plug-in to Audio Output. Plug-ins with many input and output pins indicate multi-channel or surround capability, so if you're wiring one for mono or stereo usage, just use the number of pins you need, working your way along from left to right.

Not Just A One-trick Pony

Metaplugin works amazingly well as a 32-/64-bit problem solver. Its developer, Christian Siedschlag, knows it's being used with Logic X and has already improved it in this specific respect. It reports plug-in latency properly to your DAW and even lets its plug-ins be automated (though you'll want to hit the user manual for the low-down on that process). However, it can also let you set up things that might otherwise be difficult in any DAW: load up multiple synths and drive them from a single MIDI input, split an audio input to two or more separate, parallel processing paths, or build your own multi-band compressors from favourite broadband designs. All this and much more is possible.