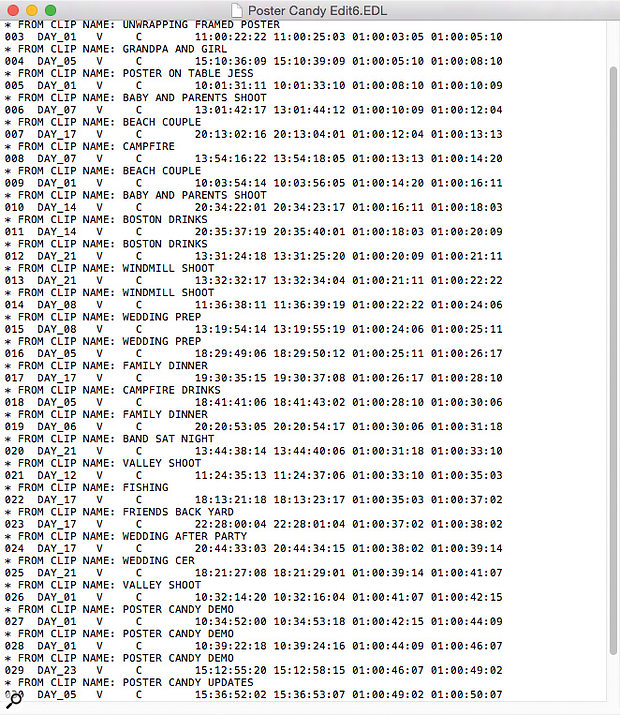 A typical Edit Decision List as it appears in TextEdit.

In this month’s Pro Tools workshop, we are going to unpick the much misunderstood topic of conforming and re-conforming. These terms might not be familiar to users who only work with music, but if you work to picture, whether as a composer or handling audio post-production for video, this is a topic you need to understand.

Conforming, sometimes called assembly, is the process of taking edits made by a picture editor hearing a guide audio track, and imposing the same edits onto multitrack source audio files, so that a high-quality version of the same soundtrack can be produced. Adding this functionality to a Pro Tools system requires third-party software such as that described in the box. You might wonder why this is necessary: could you not simply use an AAF or OMF from the picture edit? Well, for one thing, when you import the AAF or OMF from the picture edit, the clips may not have their original detailed file names from the field recorder. And for another, AAF and OMF archives don’t include all the audio that was recorded: all you get are the clips the video editor selected. If you are lucky, or you asked for ‘handles’, you might be able pull out a small amount of unused audio beyond the edges of these clips, by the amount that the video editor set in the video editor software. The default is usually only two seconds, but I normally ask for at least six and preferably 10 seconds.

If you want any more than that, you’ll need to conform — use the video edit data to bring out all the individual tracks that were recorded on location. This also has the advantage of enabling you to look for alternative takes should you need it, rather than being constrained by the takes the video editor selected — which were almost certainly not chosen because they were the best-sounding ones. By doing the conform process yourself, you can be sure you have all the options available to you rather than what the video editor or their assistant chose. The third advantage is that you are using the original source audio, rather than clips that might have been processed or converted at some point in the video editing process. A fourth reason to use conforming software is that OMF does not support the additional data relating to the other tracks, such as actors’ names and so on. 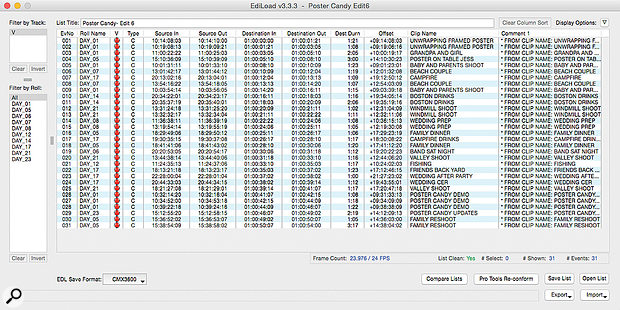 The same EDL loaded into the conforming tool EdiLoad.

In theory, there is a stage in every audiovisual production where the video editor confirms that there will be no more changes to the picture EDL (Edit Decision List), so enabling the audio post-production process to proceed in the safe knowledge that nothing is going be changed and so move. However, it is increasingly common to find that this so-called ‘locked picture’ proves not to be so final after all, with picture editors changing their minds even once the audio post-production gets underway. When this happens, you can find yourself having to redo a lot of work, which is very frustrating.

What is needed is a tool that will compare two video EDLs and produce a set of changes that can be imposed on the Pro Tools session to trim, expand or move sections of the session to match the picture changes, so you don’t lose the work you have done. Change Notes can be OK on simpler projects but are often made way too complicated by loads of video effects events that completely swamp the otherwise relatively simple picture edit changes. Fortunately, there are applications that compare two video EDLs, produce their own form of change notes and then implement these changes in Pro Tools.

What Do You Need?

To conform audio to a video EDL (Edit Decision List) you will need:

The two conforming and re-conforming applications you’re most likely to encounter are EdiLoad from Sounds In Sync and Titan from Synchro Arts, though several other alternatives are available and are described in the box. Both applications have their strengths and weaknesses, and it will depend on your circumstances which is the best one to choose. I mainly work with EdiLoad, so will describe the basic process as it takes place in that application (for more information, surf to www.soundsinsync.com).

The idea is that EdiLoad loads the audio data from the audio tracks in the picture edit EDL, converts it and exports it as a Pro Tools session with Edit reference tracks. You can then use the Expand Tracks feature on these Edit reference tracks to assemble or ‘tracklay’ all the separate tracks from the original location recording. It’s possible to load multiple EDLs into EdiLoad and ‘clean’ them to create a single list with the minimum number of events and tracks. This simplifies the conform process and saves having multiple copies of the same clips on the timeline at the end of the conform process. This process also allows interleaved (‘poly’) WAV files to be conformed without needing to split and copy all location audio. 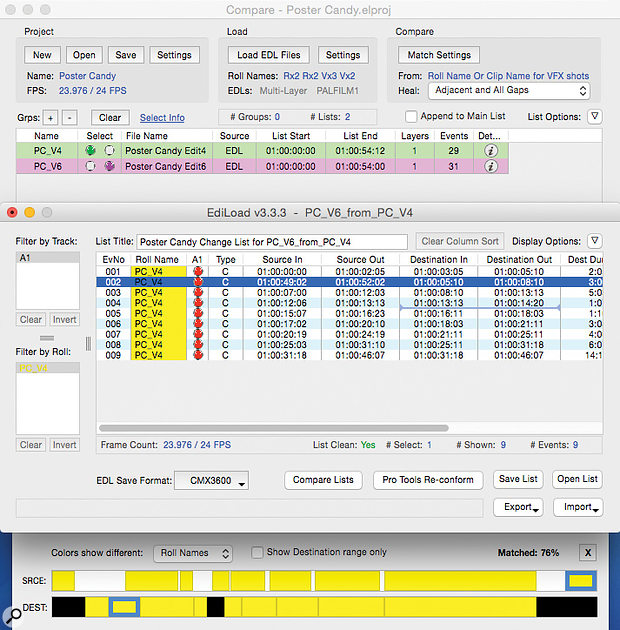 Re-conforming using EdiLoad. Two EDLs are compared, and any differences are applied within the Pro Tools session.

Since version 3, EdiLoad has also become a re-conforming tool, with a ‘Compare’ window which allows users to find the difference between vision lists and create a list of picture changes. All you need to use EdiLoad v3 in re-conform mode is two video EDLs: the original one and one with the new changes, which of course could be insertions and/or cuts. (You will certainly have the original EDL as that will have been the one that was used to tracklay the session from, so all you need to ask for is the latest version of the EDL with all the changes.) Using the Compare window in EdiLoad v3, you can drag and drop the two EDLs, telling EdiLoad which is the old and the new version. You can see from the Compare window what has changed, and the new additions are displayed clearly in the view window. In Pro Tools, you group the tracks that are going to be modified in the re-conform process, so that an edit on one track in Pro Tools will be applied to all the tracks. EdiLoad can then get Pro Tools to make a safety copy of the section to be re-conformed and place it further down the timeline out of the way.

To do re-conforming, EdiLoad controls Pro Tools using key commands, so you’ll need to step away from the keyboard and mouse while it’s working. When you hit the Go button, you can watch EdiLoad move the sections and re-lay them all in position; because it is effectively copying and pasting all your tracks, all the editing, processing and mixing that you have already done gets repositioned to match the new picture cut. Then all you need to do is review the cuts, smooth out the joins and tracklay the new shots that have been added.

Apart from EdiLoad, the other conforming utility in common usage is Titan from Synchro Arts, which has been around for ages and has been constantly improved over the years. It consists of a set of three processes. Flash Conform conforms multi-channel location sound recordings to picture editors’ EDLs, Fix Sync corrects synchronisation discrepancies between location sound and audio from the picture editors, and Flash Cutter re-cuts (re-conforms) Pro Tools sessions to follow changes in picture edits.

Reconformer, which used to be known as Conformer, is probably the least well known of this quartet, but it is gaining favour with some folk and has some nice features like copying deleted material and putting it at the end of the session so you don’t lose it, in case you need to ‘borrow’ content from the deleted section. It also has a ‘floating window’ option that sits on top of Pro Tools and allows you to manually re-conform individual tracks.

Conformalizer is a re-conforming utility that supports EDLs, XML, cutlists and change notes, and creates a new ‘change EDL’ which reflects the difference between two versions of the picture. Conformalizer can then automatically re-conform your Pro Tools sessions, databases and mix automation to match the new version of the cut.

VirtualKaty is a conforming and re-conforming utility with several major strengths, including keeping track of all your EDLs for each of your projects. It has features built in to handle major changes, enabling you to move complete sections from one place to another.