Cubase’s Drum Editor, with a simple drum pattern that’s been ‘humanised’ via a little velocity editing and some subtle timing tweaks via the Quantize panel.

Longstanding Cubase users might take it for granted, but the humble MIDI Drum Editor has long been the subject of envious looks from users of other DAWs, and if you’re new to the wonderful world of drum programming, or perhaps feel you don’t have the drumming chops to build your own patterns from scratch, the Drum Editor can help you in lots of ways — it’s well worth learning your way around it. This month, then, I’ll help you get the drums rolling with a couple of examples.

Let’s start with a few basics. Once you’ve configured a suitable drum-based virtual instrument track (for example, one loaded with Groove Agent SE, which comes bundled with Cubase — and which I’ll come back to below) and created a short, initially empty, MIDI clip on the track (use the Draw pencil tool to do this), you’re ready to get started. Double-click on the clip and it will, by default, open in the Key Editor, so instead you must choose ‘Open Drum Editor’ from the MIDI menu. If you use the Drum Editor to create new parts often, you’ll want to assign this a shortcut key.

The Drum Editor is similar to the Key Editor in many ways, but the differences make it much more drum-friendly. The most obviously useful feature is the list of drum names that replaces the piano keyboard as the vertical axis of the editor grid. The kit-piece names are based on a ‘map’ of the drum sounds to specific MIDI notes. If you find the default doesn’t match your chosen virtual instrument, you can create custom Drum Maps (as described in SOS February 2009: http://sosm.ag/cubase-0209). The default GM layout will suffice in many situations, but it’s worth noting that once you’ve assigned a drum map to your track, the Drum Editor will become the default editor for that track — just double-click the part in the Project page and the drum editor will open automatically. Unlike the piano keyboard the ‘notes’ don’t have to appear in chromatic order and can be clicked and dragged to reorder them; I’ll often bring the kick, snare and hi-hat to the top, to make it easier to program basic beats.

In the Drum Editor’s toolbar, the Pencil tool is replaced by the Drumstick, which you use to ‘draw’ drum hits into your MIDI clip and remove them with a single click. Alternatively, double-clicking with the normal Object Selection tool achieves the same thing, and holding Alt (PC) or Option (Mac) while using the Object Selection tool temporarily switches you to the Drumstick. By default, all notes added in these ways are given the MIDI velocity that’s defined in the Drum Editor’s toolbar. As you add notes, another difference between the Key Editor and the Drum Editor becomes apparent: drum hits are presented as ‘diamonds’, with their colour indicating note velocity. This is generally a much cleaner way of viewing a drum pattern than the elongated note format used in the Key Editor. Be aware that, despite the default one-shot appearance of these notes, these diamond-shaped drum notes can have a note length, as I’ll explain later.

Even using just this basic subset of the Drum Editor’s tool kit it’s easy to add (or delete) drum hits, but if your track genre requires something other than a metronomic (machine-like) drum pattern, how do you make things a little more ‘human’? Well, a useful starting point is to add some MIDI velocity variation. This velocity editing is made easier in the Drum Editor because clicking on an individual drum sound in the drum list selects that lane in the editor. As a result, only the note velocities for notes within that lane appear in the controller lane at the base of the editor. Even when editing manually, then, turning a drum robot into something closer to a drum human becomes trivially easy.

The main screenshot (above) shows a simple kick/snare/hi-hat pattern with some additional kick/snare hits added in bar four and a 16th-note hi-hat pattern. Most drummers would emphasise the hits on the whole bar and beat divisions so, as shown in the screenshot, I’ve tweaked the velocities of the hi-hat accordingly. Also, aiming to create a sort of ‘ghost note’ effect (as opposed to a drum roll) with my extra kick and snare hits, I’ve significantly lowered the off-beat note velocities for these kit pieces.

The other main ‘human’ element to drumming is timing, and the Drum Editor’s Quantize panel can help here. A full discussion of swing and groove is a topic for another day, but if you apply both a very small amount of swing and set the Randomise value to something other than zero ticks (but do start low unless you want to it to sound like a bad drummer!), then pressing the Quantize button will create just enough timing variation to take you from robot to something vaguely human. If you don’t like the effect, simply undo it and repeat it but with different settings. Oh, and if you really want to get into some subtle MIDI randomisation of note positions and velocities, the Logical Editor is a better place to go — if you are feeling brave enough!

EDM snare roll anyone? This is easy to create with the Drum Editor toolset.

That’s all useful for a basic groove, but what if you want to create rolls for a little extra flourish? Adding a set of notes as a starting point for a drum roll is easy. When adding notes, simply hold the mouse button down and drag horizontally along a lane — this automatically adds hits at regular intervals, which are determined by the current quantise setting. Pick a suitable quantise value and you can easily generate EDM-friendly snare rolls. All that’s then required is a ramp in velocity values and the job’s done.

As you might expect, the Drum Editor includes features designed to make it easy to work with Groove Agent SE. This includes the option (added in v.8.5) to toggle the display between the standard Drum Editor diamond symbols and a Key Editor-style note-length display (via the ‘Show Note Length’ button) which allows you to edit note lengths. 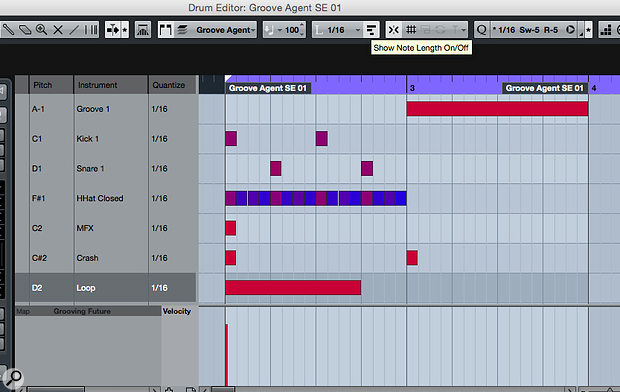 The Show Note Length button allows you to toggle between a Key Editor-style display (shown here) and the standard ‘diamond’ note display, shown in the other screenshots.

As mentioned earlier, the ‘diamond’ drum notes do have a note length and it’s value can be set within the Note Length section of the Drum Editor’s toolbar. On most occasions, the note length information might not be important, as the virtual instrument just needs the ‘Note On’ message — the length of the drum sound is governed by the virtual instrument itself, often simply by the length of the original sample being triggered. 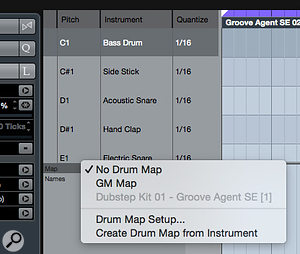 The ‘Create Drum Map from Instrument’ option will interrogate your VSTi and attempt to populate your Drum Map with a full list of the drum sounds in the current preset.However, Groove Agent (including GA SE) now includes lots of presets that don’t just contain conventional drum sounds — there are also loops, such as synths, guitars and bass samples that are part of the ‘kit’ and can be triggered via a MIDI note. These loops might be many beats or bars in length, so the Drum Editor’s default of short note lengths, and no ability to see the note length, can be a problem when programming by hand. Switching to the new Note Display option solves that.

Another Drum Editor feature that works well with Groove Agent SE is the Drum Map. Having loaded your GA SE preset, if you open the Drum Map pop-up menu at the bottom of the drum list, you can choose the ‘Create Drum Map from Instrument’ option. While this can, of course, be used with any third-party virtual drum instrument, it works particularly well with GA, and the result is a drum list that matches all the samples in the currently loaded GA kit, including any loops or sound-effects samples.

The downside is that the drum list can become quite long, which can be annoying given that in any particular pattern you’ll probably only use a few of these drum sounds. Thankfully, another Drum Editor feature introduced in Cubase 8.5 can help: the Toolbar now includes a Drum Visibility Agent (the orange button on the first screen’s toolbar), which allows you to select different levels of detail in the drum list display. For example, the ‘Show Drum Sounds With Events’ option limits the display to just those lanes where you currently have note data present. This really helps to simplify the Drum Editor display, allowing you to focus on just those sounds that are integral to the current pattern.

If your drum pattern only uses a few sounds, the ‘Show Drum Sounds with Events’ option can tidy up the Drum Editor display considerably!

Of course, the above examples only scratch the surface of the Drum Editor’s feature set and the integration possible with Groove Agent (SE or the full version). For the less confident drum programmer, one further GA SE feature worth exploring is the Style Player with its Performance Section. This allows you to take the predefined patterns and generate new patterns in the same style but with different levels of complexity. These patterns can then be further edited via the Drum Editor. This can be a great source of fresh ideas... and it would make a wonderful topic for a future Cubase workshop!