Music & Mixing For The Film Adaptation By Sam Inglis 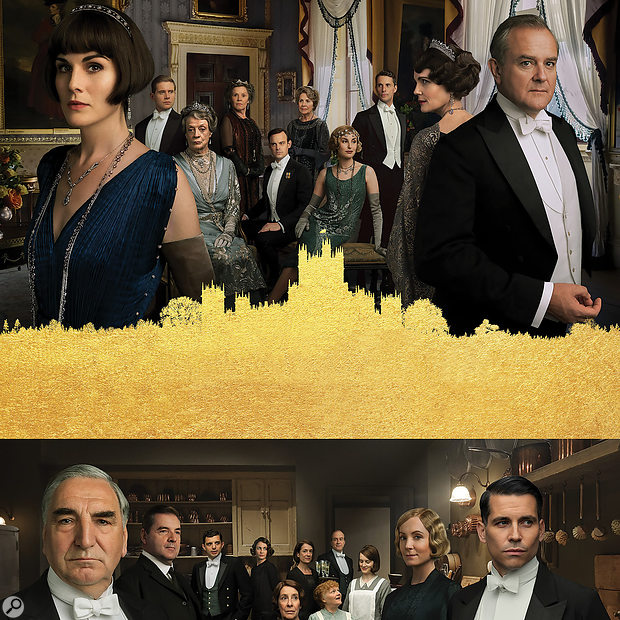 It might be set in the '20s, but Downton Abbey certainly isn't a silent movie! We talk to the team behind its state-of-the-art sound production.

Downton Abbey presses rewind on British history, revisiting the age of aristocratic intrigue and country-house politics. It's also a showcase for Britain's creative industries, especially in the sound department. The TV series was scored by composer John Lunn, with performances, recording and mixing all taking place in the UK; and when Julian Fellowes' period drama moved to the big screen, the producers saw no reason to change a winning formula.

Downton Abbey: The Movie thus features Lunn's music throughout. The score was recorded and mixed by Paul Golding, while re-recording and dubbing were handled by Nigel Heath and Brad Rees of London post-production company Hackenbacker, all of whom performed the same roles on the TV series. Appropriately, much of the work took place at another 'best of British' institution: Abbey Road Studios. Most of the music was tracked in Studio One and mixed in the Penthouse, and the final dubbing mix took place in the studio's new Mix Stage.

Familiarity for lovers of the TV series was important, but the new context allowed things to be a bit more expansive. On the music front, this meant using a larger orchestra and tracking in bigger spaces; on the mix front, it involved working in surround for Dolby Atmos release; and in terms of dialogue, it meant exploiting the greater dynamic range on offer in the cinema.

"On television, especially in these days, we're very conscious of helping lines that are delivered quietly, remembering that the audience at home aren't sitting in a darkened room with people being quiet around them," explains Nigel. "They're watching television in a domestic environment. The washing machine may be on. There's traffic outside the door. And so we mix with that in mind..

"In the movie world, you've got a little bit more room. People have paid some money to sit in a darkened room and watch and listen carefully, so I allowed more dynamic range in the dialogue. Shouts were shouted, whispers were whispered. They were still assisted, and it was still hopefully balanced nicely for the punter or for the viewer, but it is a slightly different style."

The Business Of Booming

The first stage of Hackenbacker's work on the movie was to audition the on-set dialogue recordings. These were captured by Alexis Sawyer using both lavalier and boom mics, and 'cleaned up' before delivery to Hackenbacker. "He'll use Auto‑Align so that the phase is beautiful between the shotgun and the lavs, and then he'll clean up what he needs to do, removing clothing noise if he can," explains Nigel. "We prefer to use editing techniques, rather than a huge amount of plug-ins. And then, on the board, I would have a choice of shotgun, lavalier, or a combination of both — then you get the warmth of the boom and you get the clarity of the radio mic."

The next step is to decide which sections, if any, might need to be replaced in the studio. "I don't read the script, because I don't want to learn the words!" insists Nigel. "I like to watch a cut quietly for one time only — no pressing stop, no pressing rewind — and anything I find hard to hear, I'll make a little note of, be it clarity of delivery or maybe for technical reasons. Then we'll consider that for, firstly, alternative takes from the rushes. The last option is ADR."

In the event, the amount of ADR that was necessary on Downton was relatively small. There were two scenes where the dialogue needed to be replaced entirely; elsewhere, it was a matter of dropping in the odd line or sentence. "We'll take the line and use maybe half a second of it, just to assist with S's and T's and clarity, performance of the words," says Nigel. "So that we're not throwing away the original performance in front of the camera, we're just assisting it with sounds." 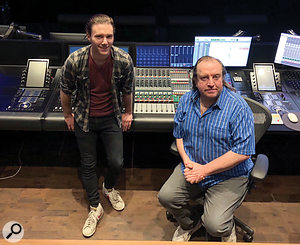 Brad Rees (left) and Nigel Heath were the re-recording mixers on Downton Abbey.ADR is also recorded using both a boom mic and a lavalier, but beyond that, Nigel doesn't strive too hard to match the conditions under which the on-set dialogue was recorded. As he points out, "The difference between recording in a field and recording in a Soho studio is so vast anyway that the choice of a brand of microphone is, in my mind, irrelevant."

From Nigel's point of view as the person responsible for making the entire sound world of the film hang together, the dialogue is the cornerstone. Once that is in place, says Nigel, "We build sound effects around that, backgrounds and atmospheres and spot effects, and then we have Foley, which is recorded in our Foley stage in Marylebone [London]. Brad mixes the Foley on the movies that we do. I step away from that process to give Brad a chance to bring a fresh ear to the scenes. He'll do that, and then next stop for me is the bit I really enjoy, which is mixing in the score."

As is usual in film production, the score was the last major part of the soundtrack to be completed. The ensemble drawn from London's unrivalled session scene was not a full symphonic orchestra, but certainly capable of generating a big sound. "It was a sort of large string section, with a few added orchestra elements," explains Paul Golding, "so we had about 56 strings and four French horns, a couple of woodwind, a cor anglais at one point, a soprano sax at another point. We had a vibraphone throughout the score. We overdubbed a bit of trumpet, and we always had harp. Some source music we had to record for the ball scene had double woodwind, two trumpets, three trombones and full percussion as an addition to the line-up used for the score. 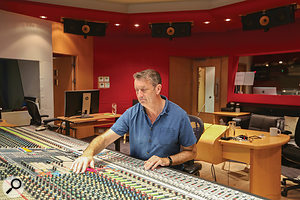 Paul Golding recorded and mixed the musical score for the movie."Then, once we'd done the recording sessions with the orchestra, we overdubbed the composer playing the piano — again, we always did that rather than playing it live. He likes to be able to listen to the orchestral take in the control room and makes a judgment on that."

When it comes to miking such an ensemble, one of the primary considerations is control. "A normal classical approach would be capturing the room, and augmenting that with a very few spot mics, whereas I need much more control. I also need the sound to be slightly reinforced. I need it to be slightly fuller and clearer than an orchestral recording would be, otherwise it doesn't work underneath what it's going to have to work with."

Achieving the control that Paul needs is down to two factors: careful use of acoustic baffles, and a lot more spot mics than would be typical on an orchestral session. "I will mic the room with a Decca tree and add outriggers to that at the same height," begins Paul. "Those would be Neumann M50s, or sometimes TLM50s, depending on what's available, or M150s, if they've got the newer ones. Then I'll use some high-quality omnis, like a DPA or something like that, up really, really high and sort of medium width, to capture the reverb of the room. Then I'll have control of the reverb of the room on those two mics with basically two faders. I really used very little fake reverb at all, because I didn't need to, it was just there. 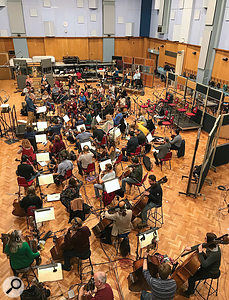 Abbey Road Studio One is one of very few purpose-built recording studios that can accommodate a large ensemble.Photo: Simon Whiteside"Obviously, there's issues to do with that, as in you've got to make sure that when everyone finishes playing a cue, they stay completely still for three or four seconds, because I need that die-away. That's quite a long time when everyone's just played a five-minute cue, and it's difficult to train people to actually take that into consideration, because they're not so used to it.

"Then, I will mic close on everything. So I'll mic each desk of two players for the string players. I'll mic every single French horn. I'll mic the harp close and possibly in stereo. I'll mic the trumpet close. I'll mic the vibes, and I'll screen them off. If you look at the photos, you'll see the general string setup, and then in the far distance is a booth that I've made for the harp. For the television and film scores that I record, they tend to want the harp really quite present, because it's very much a storytelling kind of instrument. So I need that level of control so I can make it louder than it really is and have that clarity of sound without ruining everything else.

"You'll see that I've screened off the vibes at the back of the room, to get clarity on the sound. I've screened off the trumpet, just to try and stop the trumpet drowning everybody else out, and the same with the French horns. In an orchestral situation, nearly always, you'll find if they want to use something like French horns or brass or percussion, however many strings you have, there will be times when the brass and percussion is too loud and you can't do anything about it." 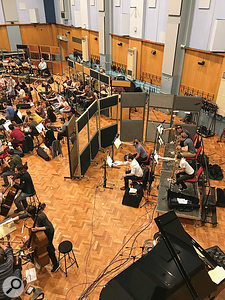 Paul Golding made extensive use of baffles to achieve better control over the individual elements of the orchestra. Here we see the brass section screened off to reduce bleed onto the string mics.Photo: Simon WhitesideFor spot mics, says Paul, "I tend to use Neumann KM84s, if I can get them, on violins. I tend to use cardioid Schoeps mics on violas, and I'd probably use [Neumann] FET47s or U87s for cellos and basses. I'd use U87s behind the French horns and possibly with a pad, because they're so loud. I've got into miking a harp with a pair of AKG C12VRs, to try to get a stereo thing going on. I'd probably use a valve mic on the trumpets, like a [Neumann M] 49, if I can. Probably, again, a pair of U87s as a stereo pair on the vibes. So, a lot of Neumanns and a few sort of specialist mics here and there.

"The spot mics you're wanting for that direct sound to reinforce the whole sound. Still, in the mix, as a general rule of thumb, you will find the majority of the sound of a score like that, say maybe two thirds of it, will be the overhead mics. So the balance of the left, centre, right and the two wide ones with the combination of the really high ones, that's the majority of sound. Then you bring the other ones in to reinforce bits and change the balance as you need to. Maybe the harp is possibly a lot more than that, and maybe you'll find that the horns and the trumpet are hardly using any close mics at all, because they're so loud already. But that's a general kind of rule of thumb."