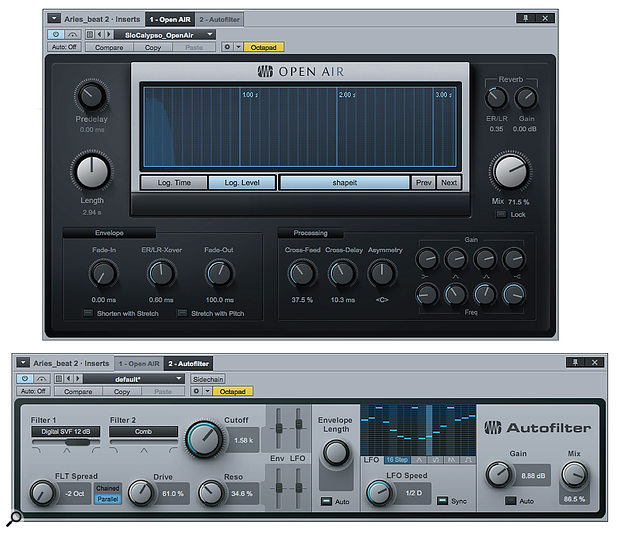 The right reverb treatment can turn almost any sound into source material for filter mayhem in Studio One.

The effectiveness of tempo-sync’ed filter effects depends on the choice of source material put through them as much as on the sound of the filter and the way in which it is manipulated. Spectrally complex signals often provide interesting results for filter effects, and sometimes a recording is so engaging it makes good source material exactly as it was recorded. Other raw material, though, can be massaged to make it better filter fodder.

Under the premise that the only thing more fun than completely abusing a plug-in is abusing two plug-ins, applying plug-in processing to source material can make it sonically richer as a fruitful first step to feeding a nice filter effect. This month I will show you how I like to use reverb, itself a complex filter effect, as a messer-upper processor to enrich whatever raw source material you choose to process.

For the purposes of increasing spectral complexity, the worst-sounding reverbs often make the best choices. Metallic reverbs, reverbs with audible shimmering in the tails, and other ‘flawed’ sounds can turn out to make the coolest source material. Let’s be bad.

Convolution reverbs make excellent tools for this purpose, and PreSonus’s OpenAir plug-in fits the bill well. Pass by the standard rooms and halls for the moment, and look for factory presets with names like ‘AtomSmasher’. That’s the stuff.

Set up a loop of some source material you can play around with. To make the examples for this column, I grabbed a loop from ‘The Caribbean Experience’ folder in PreSonus’s Studio One Loops Vol 4 collection, because percussion always works nicely for synchronised filter effects. The tempo of the loop was 125bpm, but to make my first example, ‘SloCalypso1’, I slowed it down by about half, to 67bpm. Screen 1 shows the OpenAir setup I created for it, and you can hear it online as Audio Example 1.

Predelay, Length and the parameters in OpenAir’s Processing section are all worthwhile parameters to try varying, while two other settings that sometimes make an interesting difference are the Shorten with Stretch and Stretch with Pitch settings. These have to do with how reverb is handled when the length of the impulse response differs from that set by the Length control. 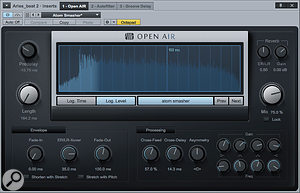 Screen 2: Here the decay time is set to the same length as that of the impulse response. Listen to Audio Example 2 to hear this.

Don’t be afraid to save lots of interim presets; they can always be ditched later if you don’t want them. However, note that changing almost any control on OpenAir causes it to mute momentarily, so I recommend finding a useful setup on OpenAir, then basically leaving it alone and concentrating on using the filter for real-time manipulation of the sound. One exception is OpenAir’s Mix control, which can generate some cool sounds if changed on the fly. Since you are using the reverb almost as a sound generator, you will frequently find yourself setting the Mix control pretty high, for a very wet mix. With a drum loop like I used for this month’s examples, though, I frequently like hearing a bit of the dry sound mixed back in just to recover some transients and propulsiveness.

Studio One’s Room Reverb can also be tortured into yielding some interesting source processing — Audio Example 4 was created using Room Reverb — but I find convolution reverb generally better suited, not least because of the option of using your own WAV file for the impulse response. Any old WAV file with appropriate sample rate and bit depth can be used, though it takes a decent amount of trial and error to get a feel for what may work well. Vocals can produce unearthly vocoder-ish textures, and complex sounds that naturally decay after a few seconds, such as tapping a glass or striking a bell, tend to produce interesting results. Long impulse responses, such as an entire sung line from a song, can produce more of a surging texture than a rhythmic bed, though shortening the Length results in a choppier, more rhythmic feeling. Screen 3 shows OpenAir using a vocal sample as an impulse response.In this example, the decay time is set much shorter than the length of the impulse response. 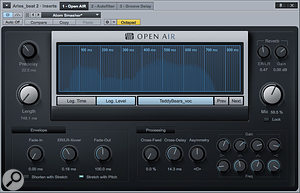 Once armed with spectrally rich source material, I have two favourite PreSonus plug-ins I use for filter effects: Autofilter and Groove Delay. I followed OpenAir with one or both of those in creating this column’s examples; obviously, you could add even more cars onto this train.

The first thing to do in Autofilter is click the Sync button in the LFO section. There are lots of variables to play with here, so I’ll give you some idea of my preferences. The first major sonic choice is the types of filters used and whether they are configured in series (chained) or parallel. I like the spatial feel of two different filter types in parallel. In the LFO section, the 16 Step setting is intended for sync filter effects, so I make use of it often. The Analog and Digital SVF filters can be varied continuously from low-pass response, through band-pass to high-pass. The various responses can create very different sounds.

Screen 1 above shows the Autofilter setup used for the first example. Note that the filter cutoffs are two octaves apart. For this kind of effect, I tend to either have the filter cutoffs far apart or quite close; I don’t often use, say, one octave difference.

Autofilter responds much better to real-time manipulation than OpenAir, and resetting step levels during playback is perfectly feasible. I try to make changes to steps immediately after the play cursor goes by a spot, rather than risk a glitch by trying to change something right in front of it. LFO Speed is another good parameter to change on the fly. Changing FLT Spread (filter spread) on the fly interrupts the audio, but sometimes the interruption sounds cool. The range of filter modulation is largely determined by the range in the step sequencer, the filter cutoff setting, and the amount of modulation being applied to the cutoff through the cutoff modulation sliders. I get the most pleasing results when one of these three might have a wide range, but the other two really don’t.

While high values of resonance produce a classic sound, if used indiscriminately all source material starts to sound the same. It’s worth the time to try listening with very low resonance for a few minutes and see what you hear.

Groove Delay is a more complex story, having four filters, each with its own delay. Screen 4 shows the Groove Delay setup used in Audio Example 2. 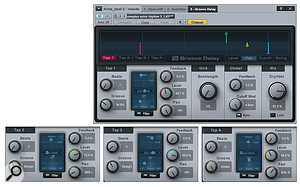 Screen 4: Groove Delay offers tempo-sync’ed delays with filtering. Each tap has a filter of a different response type and centre frequency.

Groove Delay not only allows filter cutoff and resonance to be controlled, but its filters are state-variable and can be continuously varied between the available response types: low-pass, high-pass, band-pass and peaking. Nearly all of the parameters can be changed without glitching, but changes to delay times certainly produce a major disruption in the sound. I particularly like the major shift created by switching the Beatlength parameter. The Cutoff Mod control is also rate-oriented, so changing it creates some interesting rhythms. Setting Cutoff Mod to a dotted note value generates good rhythmic complexity.

If you have a decent control surface available, Control Link can be used to hook controllers up to some of these parameters for real-time manipulation, after which, as it is said, hilarity ensues. Imagine having the delay tap levels on faders, with buttons that momentarily jump the filter cutoff or response type to a different value. That alone could keep you busy for a while. The variations offered by Groove Delay are so broad I really recommend spending some time fooling around with different parameters while in record and capturing the results to a new track.

Surf to www.soundonsound.com/sos/jul15/articles/media-0715.htm to hear the audio examples showcasing this month’s Studio One techniques.