When your recorded kick drum sound is lacking, Studio One offers numerous ways to beef it up.

Capturing the 'oomph' of a good kick drum might be one of the hardest aspects of recording drums. Many microphones exist that exaggerate the low and upper-mid frequencies in order to add beef and beater click respectively, and the old trick of using a woofer as a microphone still sees much use. But sometimes a kick drum track just needs help. This month, we look at an old technique for enhancing weak kick drums, realised four different ways in Studio One.

The old-school method of adding low-end punch to a kick drum was to set up a test oscillator to output a low-frequency sine wave — at perhaps 50 or 60 Hz — run it through a gate, and send the kick drum track to the gate's side-chain input to trigger it. The oscillator was mixed in to taste. This approach still works very well, and it's easy enough to do in Studio One: 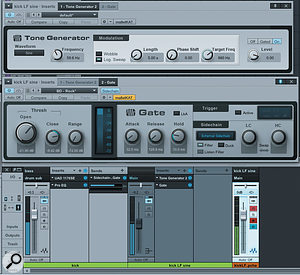 The Virtues Of Virtual

When synthesizers became widespread, engineers turned to those instead of test oscillators for their sine waves. Today, of course, you can use virtual instruments. Unfortunately, a 50Hz sine wave is not simple to obtain with Mojito or Presence, the two instruments bundled with Studio One, but many users will have third-party instruments that can easily generate a very low-frequency sine. The advantage of using virtual instruments is that they can produce more interesting sounds than simple sine waves, and if you trigger them using MIDI notes you can have your synth sound emphasise the beater attack or some other part of the kick sound that needs particular help.

There is a workaround in Studio One for the lack of LF sines in the VIs, which is once again to use the Tone Generator plug-in for our sine generator. This time, we are going to generate MIDI notes from the kick drum with the Gate plug-in, and use those to play the sine via the Tone Generator's Gated output mode. Screen 2 shows how the setup differs from the first method:

Screen 3: When the Trigger button is engaged, Studio One's Gate plug-in can be made to output MIDI notes whenever the input exceeds the threshold. Set the Range to zero if you don't want it to do any actual gating. 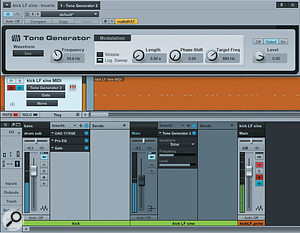 Screen 2: Here, the MIDI notes ouput by the Gate plug-in's Trigger mode are being recorded to a track and used to trigger the Tone Generator plug-in — but you can use any virtual instrument.

Both of the methods outlined above work well enough in most cases, but ultimately, using gates to generate triggers in real time is another old-school approach, and isn't always the most accurate or configurable one. In Studio One, the very best way to derive MIDI triggers from audio is to use Audio Bend markers:

Screen 4: Studio One's advanced transient detection algorithm can be used to generate Audio Bend markers (top), which can then be turned into MIDI notes simply by dragging the event to an instrument track.

Tiptoe Through The Transients

Here's one last approach that can be useful when you need to very quickly employ a single sample to augment a kick drum sound. In this one, you copy a sound to the clipboard and simply step through the project, pasting it over and over again in the right spots:

Not Just For Kicks

I have illustrated four techniques for enhancing kick drums with sine tones, but all of these techniques can be applied more broadly. For example, bass or keyboard sounds have been made to hit exactly with the kick drum by sending the kick drum to the trigger side-chain of a gate in the bass or keyboard mixer channel. MIDI notes can play any sample or synth sound, so the kick can be doubled by a floor tom tuned down or an oil-drum hit, or you can enhance a snare sound by gating some filtered noise. Welcome to the world of cross-synthesis!