Should you upgrade your Pro Tools rig to HDX? And if you do, what pitfalls await? 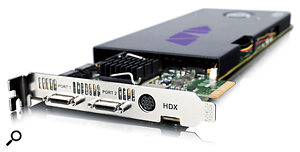 Avid's HDX cards aren't supported in older Mac Pros, and can be a challenge to fit into new ones!Like many Pro Tools users, I was forced to make some difficult decisions when Avid launched Pro Tools 10 and their new HDX cards: should I upgrade, and if so, which path should I take? For the last few years, I have been using an HD2 rig comprising a 192 I/O interface I bought new in 2004, and PCIe cards which I crossgraded from my PCI-X cards in 2008: it had given good service and didn't owe me anything. However, when I did my PCIe crossgrade, I also bought the then-current 'Harpertown' dual quad-core 2.8GHz Apple Mac Pro to run the cards. These 'Harpertown' Mac Pro machines are not compatible with the new HDX cards, so a Pro Tools upgrade could mean a new computer — and while Pro Tools 10 is supported on the latest version of Snow Leopard (10.6.8), I am sure that Avid won't maintain Snow Leopard support for ever, so it would seem sensible to move to Lion (10.7.x) at the same time. With these issues in mind, which upgrade path should I take? I narrowed it down to three options. 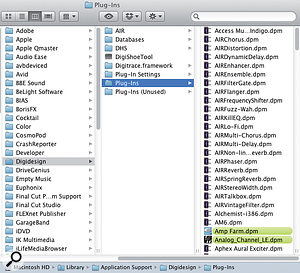 All Pro Tools 10 plug-ins still live in the bowels of the 'Application Support' folder, but AAX-format plug-ins occupy a completely different location from TDM and RTAS plug-ins.

I suspect that if I was only undertaking dubbing work, I might well have gone down the HD Native route, but I do music work as well, where I need the peace of mind that my system won't complain when I ask a lot of it under pressure. And after all, I earn my living from Pro Tools! I have had three years' use out of my PCIe cards and my Harpertown Mac, four years out of my PCI-X cards and seven years out of my 192 I/O. With this new system, I should be OK for at least three years and maybe longer, but, as before, I will be setting money aside, so that when it's time to renew my system I will have the funds ready. It's all part of business planning, which you ignore at your peril!

Eventually, then, I decided to take the HDX route and also buy a new Mac. Luckily for me, the Apple refurb site happened to have an eight-core 'Westmere' machine going with a 15 percent discount. For anyone who hasn't made friends with the Apple refurb store, you should — the machines are completely refurbished, look like new and, most importantly, are the only second-hand machines for which you can take out Applecare coverage, which is a no-brainer when you earn a living from your computer.

If there's a golden rule concerning major system updates, it's never to do them in the middle of a busy spell when deadlines matter! Such upgrades rarely go completely smoothly, and I find that the knock-on effects rattle on long after the main upgrade process is complete.

Having identified a quiet period when I could take my time to upgrade, the first thing I did was to change over computers. Although I was swapping a Mac Pro for a Mac Pro, there were differences — one of which I had planned for and one I hadn't. I had noticed on the specs that the newer Mac Pro only had Firewire 800 sockets, whereas the old one had 400 and 800, so I ordered adaptors and leads in readiness. What I didn't spot from the specs was that the newer Mac's video card only had one DVI socket, together with two mini-display ports, so I was without my second screen until I could get suitable adaptors. Also, my old Mac Pro had a full complement of four SATA drives in its internal slots, and I had thought I could simply remove the sleds in which they were mounted and transfer these, but it turns out the newer Mac uses a different sled design, so I had to swap the drives into the new sleds. 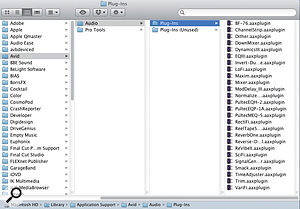 I have a backup procedure in which I use SuperDuper to do a backup of my Mac HD every day, so I took my backup boot drive across into the new Mac Pro as well as my media drives. Once I had a clean copy of Mac OS 10.7.2 on the new Mac Pro's boot drive, I used Migration Assistant, which you will find in the Utilities folder in the Applications folder, to take across all my other applications, settings and files. It saves such a lot of time on reinstalling the software from scratch and inputting all the settings. One tip, though: make sure the user name you choose when setting up the new computer isn't the same as any of the accounts on the old computer, otherwise things get messy and you end up having to change user names afterwards, which isn't easy to do properly. I found that some older software wouldn't run on the new Mac, as Lion doesn't support Rosetta and PowerPC applications.

I made sure to fit an extra 12GB of memory to the new Mac, to enable the new Disk Caching feature in Pro Tools 10 HD to really rock — goodbye to 9073 "disk too slow” messages! It was a breeze to install the new memory in the Westmere Mac Pro, as the complete processor and memory module comes out of the case, making it very easy to put the new RAM cards in the remaining slots.

Only once I had a stable machine with everything else running did I set about installing Pro Tools 10 HD — but first I needed to put the HD cards in. This wasn't as easy as it might have been, because Apple have changed the plastic unit that holds the end of the PCI cards. The old design had a slot through which the end of the card could slide, but while the new support still has a slot, it now has a cap on the end, so you have to try to put the card in at an angle and then engage both ends before getting the edge connector into the socket. The thickness of the card doesn't make this easy. Remember, as I didn't, to put the power cable for the HDX card in before you put the card in, otherwise you are going to have to enjoy this battle all over again!

Avid seem to be taking a leaf out of Apple's book, and my upgrade box didn't include an installer disc, just a plastic card the size of a credit card, with an activation code on the back. By entering that into Avid's web site, you are given access to the appropriate installers to download, so make sure you have a good Internet connection, as they aren't small files! You also get the Pro Tools 10 iLok assets deposited in your iLok account. You have to give up your Pro Tools 9 asset, but you get Pro Tools 10, PT10 HD and PT9 HD assets in the replacement bundle, so if you need to revert to Pro Tools 9, you still can.

Once I had the installers — and I used the 10.1 installer for HDX cards — the installation process was simple and uneventful. You will find that there is now an Avid folder in the Applications folder. Pro Tools 10 still uses folders in the Application Support folder for plug-ins and so on, and, as before, you will find both Avid and Digidesign folders there. The DPM plug-ins, both RTAS and TDM, are left in the Plug-ins folder inside the Digidesign folder, whereas the AAX plug-ins are in the Audio folder inside the Avid folder.

Speaking of AAX, that brings me to the other major element of the Pro Tools 10/HDX upgrade: Avid's new plug-in format, and its support, or lack thereof, from third-party vendors. Next month, we will take stock of the AAX situation.    .