How To Comp Multitracks Using Reaper 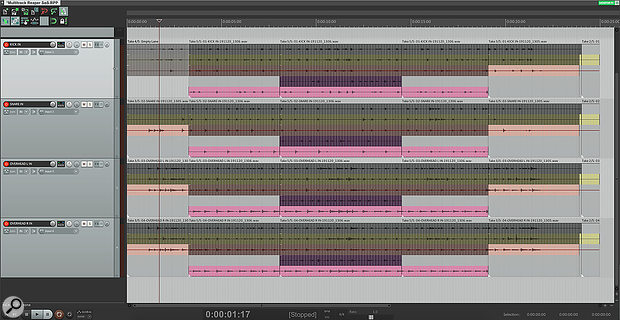 A multitrack drum session with multiple takes across multiple channels.

I really like Reaper. I've been using it since 2007, way back at v1, and while I've flirted with other DAWs I always come 'home' to Reaper. But if I had to pick something I'm not 100 percent happy with, it would probably be the take-management and comping facilities. Don't get me wrong, comping is by no means terrible in Reaper — it's perfectly workable for simple mono/stereo sources like vocals or guitars (as covered by Mike Senior in SOS April 2011: www.soundonsound.com/techniques/comping), but once you start getting into anything over a single track things can get very fiddly, very fast.

For a start, the timeline display can get messy. Reaper's take visualisation isn't the prettiest at the best of times, but once you start comping a large number of tracks, each with several takes, the visual clutter can become overwhelming. Check out the first screenshot (above) and you'll see what I mean.

It's not just an aesthetic issue, though. Track grouping doesn't include take selection, so while you might click to change to take three of your kick drum, all of the other drum tracks will stay resolutely on take one — until you manually go through and change them. Not only is this laborious, but it's all too easy to get yourself into trouble, and end up with tracks assigned to different takes. In some instances that might be creatively desirable, but for something like a drum kit recording you really want all the channels to stay in lock-step with one another while comping.

My initial workaround for this issue was to eschew 'point and click' take selection entirely, and just step through the various takes using keyboard shortcuts. With items grouped, you can step them back and forth through the takes using the 'Next Take' (T) and 'Previous Take' (Shift+T) shortcuts. This keeps things aligned but sacrifices the immediacy and visual feedback you normally get from comping in the timeline. In my experience you can often see which take has the timing you like, and it's much more efficient simply to click on it than to have to cycle through the options until you hit the one you prefer.

With all of that in mind, I'll describe a workflow I've established to record multi-input sources (in this case a drum kit) into a single multichannel Reaper track. Effectively, we're recording the entire drum kit onto one single 'strip of tape', enabling takes to be comped without any fear of the different channels losing cohesion, and greatly simplifying the take management and comping process down the line.

Most people are accustomed to using mono (single-channel) or stereo (two–channel) media files. But the WAV format allows for significantly higher channel counts within a single file, and Reaper makes it easy to create and work with these multichannel files. By default, Reaper's tracks are configured as stereo (with mono media split evenly between the two channels), but each track can be reconfigured to handle up to 64 channels of audio. That should be more than enough for all but the most ludicrous drum recordings!

Most people are accustomed to using mono or stereo files. But the WAV format allows for significantly higher channel counts within a single file, and Reaper makes it easy to create and work with these multichannel files.

How To Do It

Let's get into it. We'll build a very basic four-channel example to illustrate the concept, while keeping the process as simple as possible. I'm going to assume you know your way around Reaper in a general sense — creating tracks, assigning inputs and so forth.

This example is a four-track drum recording, so create four new tracks as normal — set their inputs appropriately, and name them 'Kick In', 'Snare In', 'Overhead L In' and 'Overhead R In'. Click the Record Arm button on each track, and you can set your recording levels at this point if you wish. If you were recording in the typical way, you'd now be ready to start tracking, but in this instance there are a few additional steps...

First, set each track to input monitoring only: right-click on the Record Arm button and select 'Record: disable (input monitoring only)'. We also want to disable the Master Send for each track: open each track's Routing pop-up and unselect the 'Master Send' tick box. Your input tracks are now largely sorted, and it's time to create the multichannel track where your recording will actually reside. Create a new track below the input tracks, name it 'Multichannel', Record Arm it, and then open the routing pop-up and change the 'Track Channels' drop-down to '4'.

Stay in your 'Multichannel' track's routing window for now, because you need to route the signal from the input tracks to the multichannel one. Click on the 'Add new receive...' drop-down, and select your 'Kick In' track. Below the volume and pan sliders you can set the source and destination for both audio and MIDI send/receive. Leave the first drop-down set to 1/2, and set the second to 1. Set MIDI to 'none' (this isn't strictly required as you shouldn't have any MIDI on these tracks anyway, but I like to keep things locked down!). This creates routing which sends the output of the 'Kick In' track to channel one of the 'Multichannel' track. Now repeat the process for the other drum input tracks, sending 'Snare In' to channel two, 'Overhead L In' to channel three and 'Overhead R In' to channel four.

You should see the meters on the 'Multichannel' track dancing around to indicate that it's receiving the signal from your input tracks. Now we need to make a change to the track recording settings so it records the track output rather than its input. Right-click on the Record Arm button, and select 'Record: output ‑> Record: output (multichannel)'.

That's the recording side of things all done. If you hit record now, your four input tracks will route to your multichannel track, where they'll be recorded neatly in one four-channel WAV file. But you'll probably notice that you can only hear the first two channels! Reaper's tracks support several internal channels, but by default only the first two are routed to the master output. You could use sends to route all four channels directly to the master, or a track plug-in to sum the channels together, but for this tutorial I'll take the additional step of breaking the channels back out to discrete Reaper tracks, since that's more useful when it comes to mixing.

Effectively you're doing the opposite of your initial routing. First, create four new tracks after the multichannel one, and name them 'Kick Out', 'Snare Out', 'Overhead L Out' and 'Overhead R Out'. Set the record mode on these tracks to 'Record: disable (input monitoring only)'. This isn't strictly necessary, but if you should happen to accidentally record-arm these tracks at some stage, it'll save you filling your session with erroneous files!

Now open the routing pop-up for the 'Multichannel' track, and assign sends to your new output tracks, much the same as you built the receives earlier. Click on the 'Add new send...' drop-down, and select 'Kick Out', then set the first channel drop–down to 1 (and MIDI to 'off'). Then repeat that for each channel, routing two to 'Snare Out', three to 'Overhead L Out' and four to 'Overhead R Out'. 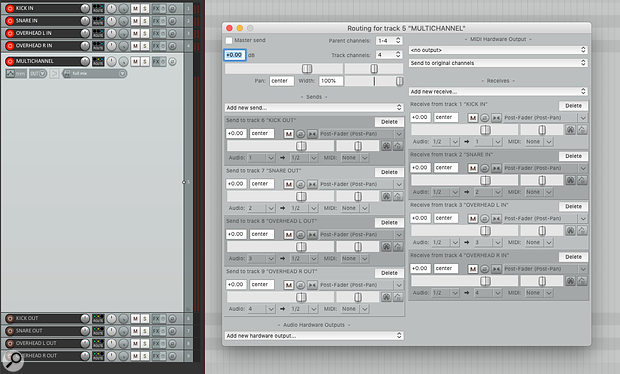 Here you can see the full 'Multichannel' track–routing setup for the inputs and outputs.

Lastly, disable 'Master Send' on your 'Multichannel' track — and you're done. The second screenshot shows the full 'Multichannel' track-routing setup for both inputs and outputs. Now you can monitor through the output tracks as you record and mix, add effects, adjust levels and apply automation and so forth, all non-destructively. Any edits and comps you make to the multichannel audio will flow on through to the output tracks.

Now when you start tracking, the entire drum kit is recorded to the single 'Multichannel' track. Once you lay down a few takes and start comping, you're switching takes on every drum channel with a single click — it's all locked together in the one WAV file, and it only gets split to the output channels afterwards. 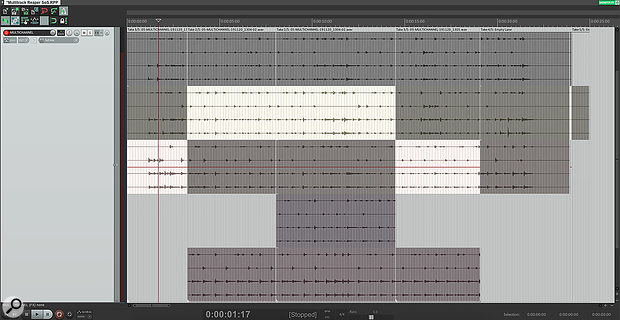 Comping between takes on the 'Multichannel' track.

Once you're dealing with a complex project full of other instruments, you'll likely tire of seeing all these empty input and output tracks. You can hide them from the TCP, to keep your session looking clean.

Open up the Track Manager window (by selecting View from the top menu, then Track Manager). Click in the TCP column, and un–tick all of the 'Kick'/'Snare'/'Overhead' tracks, leaving only the 'Multichannel' track visible. This keeps your session looking neat and tidy, without removing any functionality. 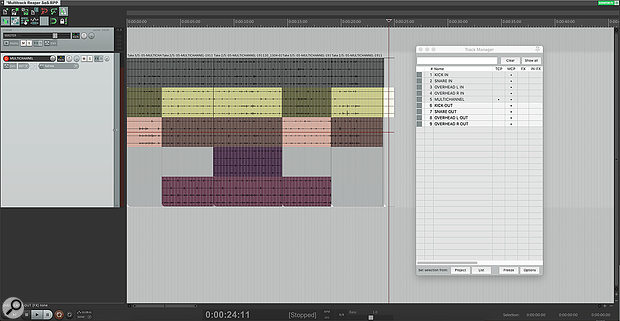 The Track Manager window and the TCP with only the single 'Multichannel' track visible.

This tutorial is for a simple four-channel recording, but Reaper allows up to 64 channels per track, so you can extrapolate these steps to accommodate some very large multichannel sources if you need to. And if you find this whole approach useful, you can save the entire routing setup as a template to avoid having to set it up over and over again — I covered track templates in some detail back in 2018 (www.soundonsound.com/techniques/total-recall-reaper).