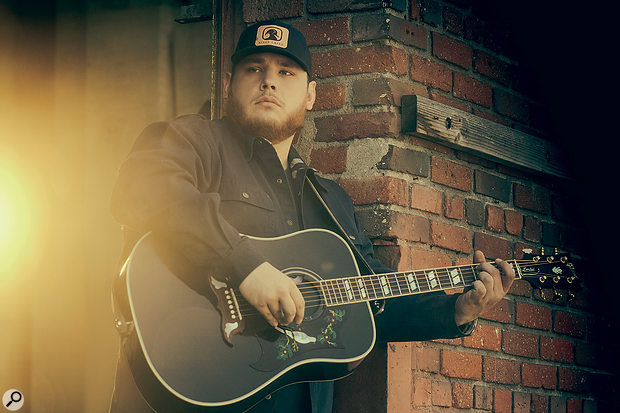 "I think my cool factor is not having one," says Luke Combs.Photo: Jim Wright

Luke Combs' anthemic songs have crossed over from the country world to top mainstream charts. We talk to the production team behind his massive hit singles.

In 2015, country singer Luke Combs was barely making ends meet. Then he recorded a six-song EP with producer Scott Moffatt, and the song 'Hurricane' became his breakthrough hit, going four times platinum in the US. Four more major hit songs, including the megahit 'Beautiful Crazy' helped steer Comb's first album, This One's For You, released in June 2017, to a record-breaking 50 weeks at the top of the US country album charts. His second album, What You See Is What You Get, went one better, topping Billboard's regular album chart as well as charts in Canada and Australia, and even did well in the UK.

Luke Combs has a way with social media, but other than that, his success appears to be mostly down to a great voice and great songs — with important contributions from Scott Moffatt and Nashville star mixer Jim Cooley. From his mix room at Black River Entertainment on Nashville's Music Row, Cooley says: "The songs are great, and people love his voice. The tone of his voice is incredible. People just love hearing him sing. It is real, it is authentic, it is him. You know he is genuine. There's nothing fake about him, and that is important for an artist. Plus, I think the production is brilliant, and we really went for an aggressive, punchy sound that complements the vocal. We just wanted the music to slap you in the face and hit you over the head. You could say it's like '90s music on steroids!"

In the tradition of '90s country stars like Garth Brooks, Vince Gill and Brooks and Dunn, Combs' music is all about big guitars, big choruses, and what sounds like live band playing, with the occasional tasteful addition of samples and synths. Yet, says Moffatt, "Luke and I never talked about the '90s, though I guess it's a reference for both of us. I was raised in the '90s, and I grew up listening to stuff like Aphex Twin, Radiohead and Outkast. That left an impact on me. You draw on the evolution of music, including today's music, but sticking with the foundation that made you also is important. The main thing continues to be hooks, melody, melodic sensibility, stuff like that. These are the things that we are drawn to. And everything else kind of follows. All the musicians who were in the room when we recorded Luke's tracks are also basically from the '90s, so that is kind of what you get. Plus Jim [Cooley] was really pushing things, insofar far as compression and the largeness of the tracks is concerned!" 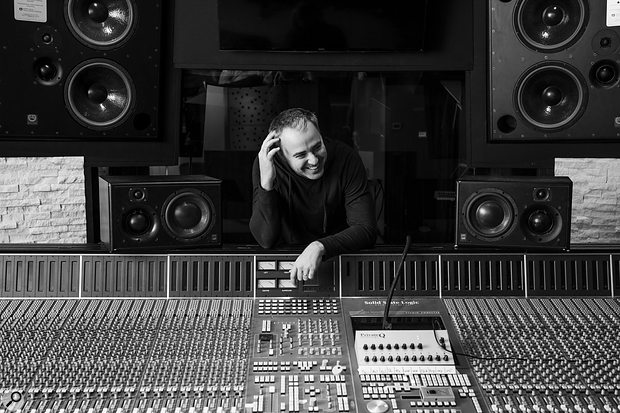 The productions do indeed sound huge, with the immediacy and hard-hitting impact of today's music, and plenty of low end. "I love big bass!" says Cooley, "and they put that all over country music now as well. For a long time, people were complaining that country music sounded pretty thin, but I now often mix country songs with just synth bass, or a mixture of synth and real bass. The kicks and bass go pretty low now. I try to mix bass as loud as I can get away with. People sometimes ask me to turn it down, because in country music they like their vocals loud, and too much bass can cover up the vocal. I work a lot with a producer Mickey Jack Cones [Linkin Park, Trace Adkins, Dustin Lynch, Joe Nicholes] and he also likes that big bottom end. The bottom end hitting in the choruses is what makes them sound huge."

Scott Moffatt is an artist and songwriter who occasionally produces other people's multi–platinum albums.Apart from one track, Scott Moffatt has been sole producer for both This One's For You and What You See Is What You Get. However, he doesn't see production as his main career, instead describing himself as "a songwriter, musician and artist". Born in Canada in 1983, Moffatt came to prominence in the '90s with his three brothers as the Moffatts. The band still regularly get together, and are most popular in Asia. Because of his reputation there, Moffatt has produced Thailand's number-one band, Slot Machine, as well as several other Asian bands. While Moffatt likes to work on his solo career, he nonetheless regularly gets drawn into producing, as happened with Combs.

"Some time in 2015 I was helping out a guy called Pat Cooper," recalls Moffatt, "a wonderful singer, and we were tracking his vocals at a studio in Nashville called Gold Cassette, which is run by an engineer friend of mine, Alex Gilson. Luke swung by, because he was friends with several people in that group, and he liked how I was dialoguing with Pat and getting performances out of him. So he asked me to help him track six of his demos, which we did at Direct Image Studios, with Alex engineering."

A few months later Moffatt and Combs recorded more songs, at Gold Cassette, Direct Image Recording, Blackbird Studios and Southern Ground studios, all in Nashville. (The YouTube video of 'Beautiful Crazy' shows one of these sessions.) Many of these songs appeared on This One's For You. Its successor, What You See Is What You Get, was recorded in the same studios plus Sound Stage Studios, over a longer period of time, with sessions taking place in March 2018 and again in February 2019, again with Gilson engineering.

"Luke brings in the song demos, usually acoustic guitar/vocal, but sometimes with a full production," explains Moffatt. "He's the one who chooses what songs are recorded, and end up on the album. He is the decision-maker. I then do pre-production of many of the songs, on my own, in my studio. I'll sit with the song and think about where I think it should go, and develop some ideas for it, and play and record these. I sometimes remove sections of a song, or rearrange the structure, or change the vocal melodies a bit, but in general my production work was about arrangements and getting good performances. At the end of the day, when you play songs...