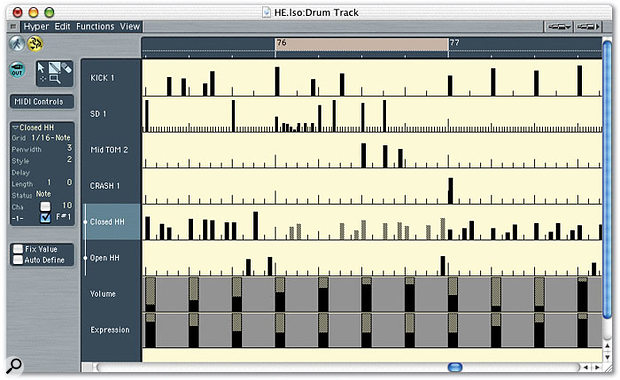 The Hyper Editor window shows each MIDI data type in a separate lane. Each lane has its own parameters, called a Hyper Definition, which appears in the Parameter Box at the left when the lane is selected. Lanes linked by a vertical line with dots, as are the Closed HH and Open HH lanes here, are grouped.

This month we offer help getting to grips with Logic's much misunderstood Hyper Editor, and tell you how to reduce sibilance without using a de-esser plug-in.

Each Hyper Editor lane is a bar chart with an individual bar for each MIDI event. For notes the bar height indicates MIDI velocity and for all other MIDI messages it indicates the data value. What data is displayed as well as how it is displayed is controlled by the Hyper Definition, which you set in the Parameter Box at the left side of the Hyper Editor window. You can only display one Status of MIDI message — notes or MIDI Continuous Controllers, for example — in each lane, but within that message Status, you can choose to show all messages on all MIDI channels, or limit yourself to a single message type or a single MIDI channel, or both. For example, you could display notes of all pitches on all channels or only the MIDI kick drum note on MIDI channel 10. Likewise, you could choose to display all MIDI Controllers or only Controller number 7 (which corresponds to MIDI volume). The usual strategy is to view one message type such as a single pitch or Controller number per lane. That makes it much easier to see what you're doing and avoid affecting MIDI data unintentionally.

When you're using Logic to play software instruments from another Rewire application running in slave mode, you need to set Rewire behavior to Live mode in the Audio Driver Preferences to achieve low real-time latency. On the other hand, for MIDI sequence playback, that is not necessary and uses extra CPU cycles. Len Sasso

Each Hyper Definition has three view parameters: Grid, Penwidth, and Style. Penwidth and Style control how the bars appear in the lane and are straightforward to set up — choose what looks best to you. Grid, on the other hand, radically affects data entry and editing and works differently from the grid in any of Logic's other editors. The two critical things to remember are that all bars between two grid lines are linked for purposes of selecting and editing, and new events will always be created at the grid lines. Linking between gridlines can drive you nuts when using the Selection tool (arrow icon) until you get used to it, but it is one of the Hyper Editor's best features. Here's how to take advantage of it.

Normally, when you click-drag the Selection tool over some bars in a lane, their height will snap to the cursor position. Fortunately, that effect is limited to the lane you click in, but it can still be disconcerting if you're intending to just select the bars, not change them. There are several ways to avoid changing values with the Selection tool. If you Shift-click between grid lines that contain no bar, you can then drag to select a range of bars to the right or left. You can Shift-click individual bars to add and remove them from the current selection. You can tick the Fix Value box to prevent the Selection tool from ever changing a bar's height. (The key command 'Protect Values toggle' toggles that tick box.)

Another disconcerting aspect of the Selection tool is that Shift-click-dragging between grid lines where a bar is already selected will move all selected bars instead of extending the selection. Bars can be moved horizontally and vertically, and horizontal motion is quantised to the grid. For drum editing, that's a great way to move or copy (using the Option key) notes from one drum to another, but it's an unwelcome surprise when you're not intending it. In short, watch where you click, set each lane's grid size small enough to separate all bars, and know the rules for selecting and dragging.

In the age of modern audio sequencers where plugging in an extra compressor or two doesn't cost the Earth in terms of processing power, it is often regarded as good practice to record to disk as clean as possible and without compression. This gives the maximum range of options for mixdown and prevents audio being recorded that is over-compressed. Having said this, old habits die hard, and harking back to the days of limited processing I still tend to compress to disk when I record almost anything. This comes out of knowing my vocalists and compression settings very well, and having the vocals under control at the tracking stage makes the mix stage that much simpler. 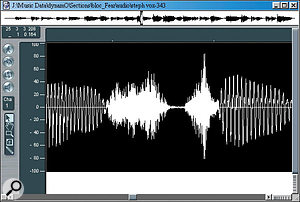 Reducing the level of a sibilant consonant in Logic's Sample Edit window.However, one common problem with this approach is sibilance: the resulting recordings sometimes suffer disproportionately high level on high-frequency phonemes such as 's' and 't' sounds, as these don't carry much low-frequency energy and hence the compressor lets them through. There are many plug-in de-essers available, but none of them do the job accurately enough for my liking, as they seem to degrade the rest of the audio slightly.

Using Logic's sample editor, you can tackle this sibilance manually. It is a time-consuming process but does allow absolute control over the problem without having a detrimental effect on the rest of the audio. In the sample editor, go to a closer horizontal view than the default by zooming in one or two times. This will reveal what I refer to as the 'furry sausages'. At this zoom level the high-frequency components are clearly distinguishable from the rest of the audio. The screen shot is of the transition between the words 'chance' and 'to'.

With a highly sibilant vocal line these 'sausages' will often be greater in amplitude than the rest of the line, but don't rely on this — use your ears first and foremost. If it isn't broke then don't fix it. Just highlight the problem region, being careful to grab only the area with the strong high-frequency component. (If you have the Search Zero Crossings option ticked in the Sample Edit window's Edit menu, Logic will find the zero crossings by default to prevent clicks where the level is changed.) Then use the 'change gain' feature to drop the level. I find settings between -3 and -6dB to work well. Be careful, though, as the more severe the alteration, the greater the likelihood of some adverse effects.

By following this process a perfect vocal take can be created that has all of the control of a compressed sound whilst not being at all sibilant. This will then drop into your mix without needing any extra processing which can in turn free up valuable processing power for the quality reverb you'll now want to use!

As you've probably gathered, the Hyper Editor shines as both a drum and MIDI Controller editor. For drums, it allows you to quickly create quantised drum parts, move or copy hits between different drum sounds, and edit the velocities of multiple hits at the same time. You can do all those things in other editors, but not nearly as easily. The Hyper Editor has a default Hyper Set for GM drums, but setting up your own with lanes only for selected drums is a simple process, and fewer lanes are easier to view and work with. The trick is to start with an empty Hyper Set, open another editor (the Event Editor is a good choice) to display the drum part you want to Hyper Edit, select at least one note for each drum sound you want to include in the Hyper Set, then choose Multi Create Event Definition... from the Hyper Editor's Hyper menu. That will add a lane for each of the selected drums. You can also automatically add Hyper Definitions one at a time by ticking the Auto Define box and selecting events in another editor. (Don't forget to untick the box when you've finished.)

When editing drum parts, keep in mind that you can group adjacent Hyper Definitions in what is called Hi-hat mode by clicking to the left of the Hyper Definition name in the track list. You can have as many groups as you want as long as there is a non-grouped lane separating them. If you want to group non-adjacent lanes, first drag one of them next to the other. Hi-hat mode prevents you from entering notes of different group members at the same time position, but it does not automatically delete duplicates that already exist.

The main advantages of the Hyper Editor for MIDI Controller data are the time-synchronised display of different controllers, the ease of moving or copying data from one controller to another, and the ability to quickly draw in Controller data at the Hyper Definition's grid spacing. The same Hyper Set setup tricks described for drum Hyper Sets work for Controller Hyper Sets. In addition, selecting a MIDI Region and choosing Create Hyper Set For Current Events from the Hyper menu will automatically create a Hyper Set with Hyper Definitions for all and only the Controller events in the Region. That's a much easier way to quickly find all the MIDI Controller automation in a Region than looking for it in the Event editor.

There's no need to get hyper about the Hyper Editor. A little time getting to know it will save you lots of MIDI editing tedium.