The Importance Of Metadata For Media Composers

No matter how brilliant your music is, TV and film producers will never license it if they can't find it... 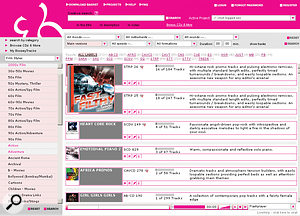 The primary means by which TV and film producers will be looking for library music is through on‑line searches. A strong description is vital to ensuring that your music stands out.

Ask any media or library composer what they consider to be the least enjoyable aspect of their work. I feel certain most of them will tell you it is being asked to provide descriptions of their tracks, coming up with keywords, or citing well‑known artists they sound like. I know I would.

This odious task is made all the more difficult by the fact that our profession requires us to be musical chameleons, composing in endless different styles and genres in order to make our music appealing to as many end users as possible. Many of us simply don't know our 'downtempo' from our 'chillout' and haven't the faintest clue who we might sound like.

The worlds of composing for the media, and production music, have become very crowded. The harder it gets to earn a living from traditional record sales and digital downloads, the more artists migrate to, or at least devote some of their energy to, music licensing — the promised land of royalty earnings.

As a result of this mass migration, the music licensing business has become a vastly different place. A new generation of music libraries exploiting the convenience of the Internet has sprung up. Here, the artists upload and configure their own music, and this is the model I will be discussing here.

After several years of submitting music to many on‑line music libraries, I am of the opinion that objectively describing my own music is one of the most difficult aspects of being a composer — far harder than the creative process. I used to think it was tedious but fairly easy: after all, who better to say what the music sounded like than me? I shared in the composition process, deciding on key, tempo and mood, so surely it is simply a matter of putting these elements into writing? The answer to that question is almost always "no”, and here's why.

The people searching for your music on library sites are film and TV producers, advertising agencies, game developers and Web developers. Whatever they are searching for, they have a very specific brief, and imagery in mind that won't be covered by "dreamy track featuring cello, electronics and guitar”. Furthermore, their search is likely to pull up hundreds of tracks with rather generic descriptions, and they will have neither the time nor the inclination to listen to each one until they find the perfect music. They are far more likely to shortlist tracks with the most intriguing and incisive descriptions and keywords, and pick what works best from these. Above are examples of configurations for two tracks that are similar in terms of genre, production and writing skills.

In a search run on a popular on‑line music library, track A was amongst the first three tracks in the search results and track B fared less well, showing up on page nine. The search results show 50 tracks per page: it is easy to imagine which track stands the best chance of being licensed. It is also easy to see why track A came out on top. The title, description and keywords are visually and thematically specific, whereas track B is vague and focuses only on the style of music. 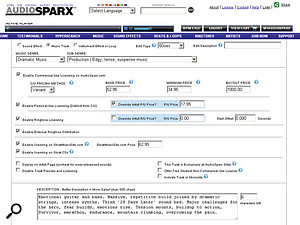 A piece of music, no matter how beautifully composed and recorded, will do nothing but gather dust if it isn't properly 'configured'. In order to do this, the composer must try to think like a film producer looking for music for his film, rather than a musician explaining how he composed his track. Furthermore, a disciplined media composer will compose with a brief in mind even if he hasn't been given one. By doing this, he will have a more specific description in mind when it comes to presenting his track to potential buyers.

Even in the cases where we, as the composer, know our way around the proliferation of musical subgenres (see box above), the fact that we can tell our happy hardcore from our nosebleed techno doesn't eliminate the need to provide a balanced, objective description of our own music. Nor does it make it any easier to do so. Unfortunately, many musicians are still lousy at delivering a useful and accurate description of their music. Perhaps we should even be asking other people to do it for us.

Description: A brassy, syncopated theme with jazz elements, depicting the drama of the city streets; crime and the police; or possibly espionage/undercover stories.

Since the late '90s, there has been an incessant urge to pinpoint and pigeonhole musical styles to the point of lunacy, sparking raging debates on music forums about whether a track should be categorised as speedcore or thrashcore based on its tempo, when really the argument should be over whether the track should be archived or permanently deleted. It is my belief that this explosion of obscure and often downright bizarre subgenres is a product of the DIY music revolution. In the days before home music production was affordable and accessible, artists depended on record producers and executives to put their music before the public. In most cases, they had very little say over the categorisation and marketing of their sound, and many of the people responsible for this aspect of the commercial process were not musicians themselves, but music enthusiasts with a broader and more balanced perspective on which demographic would relate to the music.

Now that so many songwriters, producers and bands have taken this process into their own hands, it is up to them to decide what to call their style and how best to make it appealing. We are constantly being told to stand out from the crowd, and what better way to do that than to start your very own subgenre — a new craze? This has worked well for some, but the more people try to capitalise on it, the more fractured the contemporary music scene becomes. The lunatics have taken over the asylum.

All of these strange labels single out very specific elements of the style, and should be useful in terms of accurately describing a track to a potential licensee or listener in just one word. The trouble is the only people who fully understand each of these labels — "progressive trance”, "hard trance”, "happy hardcore”, "speedcore”, "freestyle”, the list goes on and on — are committed enthusiasts of the music. Not helpful to people like me, unless I knew for a fact that every film, TV, advert and game producer was one of the aforementioned enthusiasts.