"We technically have 10 musicians in the band, but we always try to make everybody part of the writing process," says Hemnani. "Anyone who has an idea is encouraged to help and offer ideas and feedback in any way they can. This means that when we make a song, there will be many different perspectives on that song, whereas if just one artist works on a song, that artist will at some point need to step away from it to give themselves some time and come back with a fresh perspective. Whereas with us there already are tons of perspectives very early on and we just bounce ideas off each other."

"I never saw you guys getting stuck at any point," marvels Maxwell. "The moment there was some doubt in anyone's mind, somebody else would come and say, 'Why don't we do it like this?' and a third person would say, 'Yes, that makes sense.' I never saw you bang your head against a brick wall on anything."

"When you hit a wall, why keep running against it?," Hemnani responds. "Just go through a different door! Our process is like putting popcorn in a microwave: one starts to pop, and then another, and then it's a rapid fire of popping popcorn. That's kind of how we work. One person has an idea, this will spark something in someone else, and they will go off in their corner and do something that will provide a new spark, and so on. We are very in sync with each other."

Brockhampton's collaborative songwriting process means that the tracks on Iridescence credit up to eight co‑writers and six co‑producers per song — but, in sharp contrast with almost all charting songs and albums released today, there are no outside writers or producers.

Working in a legendary studio with great live rooms prompted Brockhampton to widen their sonic palette and include more live sounds than before. This is where the Abbey Road engineers Maxwell and Mysko, with occasional help from Chris Parker, came in. Mysko: "We helped them record musicians who were not in the band. There was a Jamaican MC who came down at one point, which was fun, and we recorded strings, piano and a choir. Initially the idea was also that we'd fill in for Romil with the recordings in general for when he wanted to sleep, but he never stopped, so he remained at the controls of the main Ableton workstation throughout. Chris filled in for Andy and me when we needed to sleep!"

Maxwell: "For the live recordings, Romil would give us a stereo stem of his Ableton to work with, which we loaded in Pro Tools. The quickest option usually was the best to keep the creative juices flowing. The strings were a double string quartet, which we recorded in the live room of Studio 3. One of the band's producers had a setup there with three keyboards and monitors and an interface, so we had to take out his setup and rebuild it again after we were finished. We recorded the strings with a spot mic on each two strings, a main pair, and an ambient pair in the gallery, and these mics went straight into the SSL J‑Series desk in the studio, fairly flat, and then into Pro Tools. The children's choir was recorded with Neumann U87 spot mics for each pair of singers, and again a main pair and a gallery pair. We tried to keep things as simple as possible. The most important thing was the speed of the creative process, and we did not want to spend ages fiddling with sounds and things. Once again, it was all about keeping the process going!" 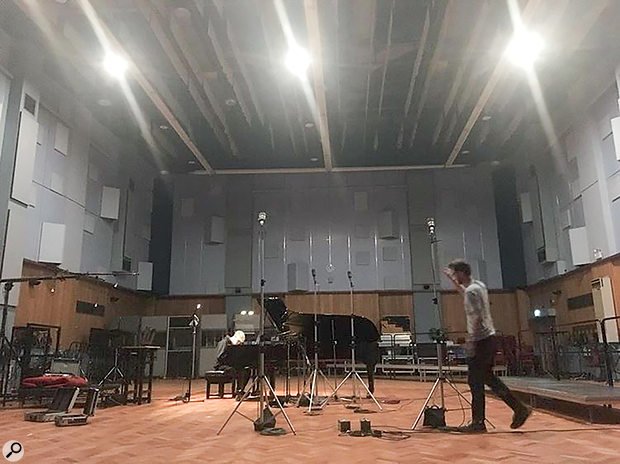 Joba's piano parts were recorded by Andy Maxwell in the cavernous Studio 1.

Joba contributed some crafty featured acoustic piano parts on Iridescence, most of all the piano solo that introduces the track 'Tonya', which has some unusually advanced chords for a pop song. These were recorded by Maxwell: "The piano recordings were done in Studio 1, the main orchestral room at Abbey Road. They also were super‑simple. We had a pair of DPA 4006 microphones over the hammers close to the keyboard, one low, one high; a pair of Coles 4038 mics in a Blumlein array; and behind that we had some Neumann TLM50s and also a pair of Neumann M50s even further back. We did not add any artificial reverb to that piano. The sound that you hear on the record was the mix that was done on the console when recording. Studio 1 has a great natural reverb sound, and the reverb you hear mostly came from the M50s, which were about 10 to 15 feet back from the piano." 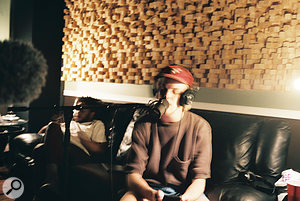 The Shure SM7B is Brockhampton's vocal mic of choice.The recordings of the band members themselves were for the most part handled by Hemnani, with help from Joba, and a central role for the Shure SM7B and some choice Abbey Road outboard. Hemnani: "I once watched a documentary about the Red Hot Chili Peppers, in which they were using the SM7B, with the singer holding it in his hand, and I thought, 'Let's buy that and see how we get on with it.' We've been using it ever since."

Joba: "The SM7B is our favourite microphone. We always recorded our vocals in the control room, and we're basically all huddled around an SM7B. We tracked the mic through a Neve 1073 with a high shelf, and a [Teletronix] LA‑2A. That was the vocal chain we stuck to."

Maxwell: "There was one song for which we used the RCA BX44 on Dom [McLennon], and I think we all regretted it. It sounded cool, but it was a nightmare to fit in the track."

"The moment Dom worked with the ribbon microphone, we were like 'Man, this does not sound as good, just come in and record on the SM7B,'" agrees Joba, "and he was like, 'no, I need to get it now.' We were not going to say no to that. As an engineer I have struggled with the emphasis on capturing a take that's raw and real, but as time went on, I realised that I prefer to have a real and honest take over a high‑fidelity take." 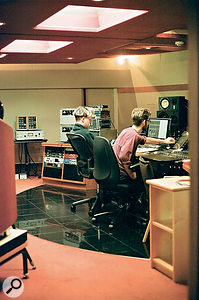 Russell 'Joba' Boring (left) and Andy Maxwell get stuck into a mix in The Penthouse at Abbey Road.After one and a half weeks of intense, round‑the‑clock sessions, the Brockhampton collective decided that it was time to start the final mixes. Mixing has been Joba's job ever since he joined the band, but in the case of Iridescence, Hemnani, Maxwell and Mysko assisted him in The Penthouse. In line with current working methods, the final mixes did not represent a fresh start, but built on work that had already been done. Hemnani: "As a producer my job is to put the artist in the best position to succeed, and so in a similar way I also try to set up Russell in the best position to succeed when he mixes. That means already mixing while recording."

Joba: "Recording and mixing are equally important, and we all try to make everybody's jobs as easy as possible. But when it comes to the final mix, it is mixing time. The pressure is on, and we have to make this shit sound as great as it can be, and usually in a very small window of time. All our records have been that way. I mixed our first record in three days, which was absurd!"

Mysko: "Writing/recording and the mix process employ two different sides of the brain. During recording it's the right side of the brain and you're being creative and free‑flowing, and when it comes to mixing, you get very analytical and you look at things in a different light, with much more focus on nitty‑gritty details."