Secrets Of The Mix Engineer: Bainz By Paul Tingen 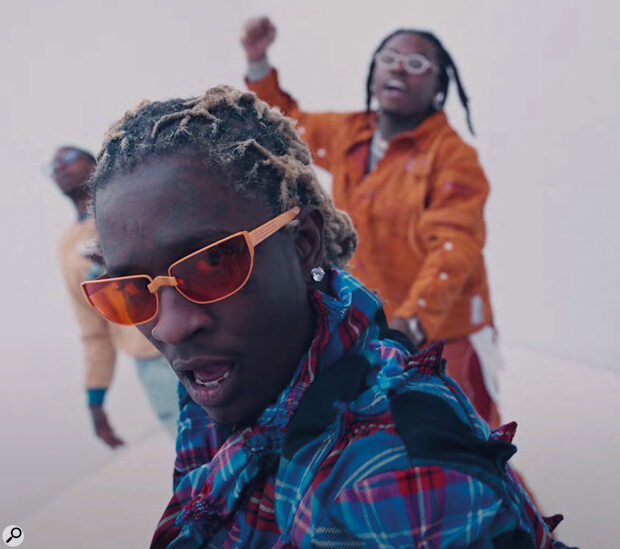 Traditionally educated in the art of recording, Bainz has had to adapt to Atlanta rap’s studio culture. Here, he talks us through his mix of Young Thug and Gunna’s hit single, ‘Ski’.

“The process is always the same. Young Thug, Gunna or another rapper from YSL Records comes into the studio, and they choose a beat to work with. The beat is loaded as a 2‑track into my Pro Tools recording template, and they start improvising over it. Thug often spends a lot of time chopping up the beat in Pro Tools and rearranging it, to get the exact structure he wants.”

Angad Bains, aka Bainz, works primarily in the Atlanta rap scene. There used to be a time when the red light ruled — make a noise or enter a studio when it is on and you’re dead meat — and artists would come into the studio with carefully prepared songs, with chords and lyrics written down and laboured over for weeks or months. But Atlanta rap culture completely ignores the old paradigm. A relaxed vibe is imperative, and sonic corruption a problem to be solved after the event.

“Thug or the other rappers work out their rap in the control room, which usually is full of people, because it adds to the vibe,” Bainz explains. “No words get written down or entered into a phone ever, by anyone. You will be surprised at how fast the rappers move! Sometimes the entire vocal is laid down in less than an hour. It’s about the energy in that moment. Our job is to capture that, maintain sonic integrity and make the end result sound as amazing as possible.

“A lot of the time people will be talking to each other or on their phone during the takes, so it’s not an ideal acoustic environment. Once when we were working in Atlanta, we didn’t have space for the gobo, so the studio assistant stood behind Gunna and held up the gobo in his hand, while Gunna’s engineer, Flo Ongonga, was recording him. It was crazy! So while we capture all that excitement, afterwards there’ll be a lot of clean‑up, getting rid of noise and clicks and pops and so on, using iZotope RX.”

Based in Los Angeles, where he has his own studio, Bainz has been working for Young Thug and his YSL Records since 2017. One of his first credits with YSL was as engineer on the label’s Slime Language compilation album, released in 2018, and he engineered and mixed much of Young Thug’s debut album, So Much Fun (2019), which went to number one in the US.

Bainz in his LA studio.

Deep in the middle of 2020 and of the pandemic, YSL hatched a plan for another Slime Language album. The concept of the Slime Language compilations is to showcase YSL’s artists, as well as a large collection of guest artists and Thug’s close friends. And so Slime Language 2, which also became a Billboard number one, features the likes of Travis Scott, Drake, Lil Baby, Lil Uzi Vert, Big Sean, Skepta, Future, Kid Cudi, Meek Mill and many others, as well as Young Thug and Gunna, of course.

According to Bainz, working on the album made little difference to his daily rhythm, apart from the complications of the epidemic. “Since I started to work for YSL, I have barely had any days off. I am Thug’s and YSL’s full‑time engineer, and they are in the studio every day. Because YSL is such a big camp, as a team and as a label, somebody is always working. They operate like a big family. I do mixes for others as well, sometimes, but I am on call all the time as an engineer. The only reason I can do so many mixes is because I have my room in the same facility, right down the hallway, so I can just walk over to help with recording when needed.

“When the Covid crisis first happened last year, all studios in LA had to shut down. So we did the Slime & B album of Thug and Chris Brown, at Chris’s house. Eventually we went to Atlanta to work on Slime Language 2, and then we came back here. We continued working throughout the pandemic, but with fewer people in the control room, and everybody was constantly getting tested. Because there were no tours last year, I recorded and mixed more than I have in a long time. Last year I did many more projects and mixes than normal.”

Born in New Delhi, India, Bainz got to his position as chief engineer and mixer at YSL in Los Angeles via Australia, Florida and New York. He recalls, “I never played an instrument, but got into DJ’ing and I was into electronic music. I went to Melbourne to do a bachelor degree in something, I can’t remember what it was, but I hated it. I dropped out and then enrolled in the School of Audio Engineering Institute in Melbourne. I was always into the technicalities behind music and there...