An Introduction To Lighting Techniques And Technology By JG Harding

Are your videos looking a little flat? Make light work for you and you'll soon be creating depth and mood in even budget productions.

There's an old adage that photography is akin to 'painting with light', and that cinematography is the moving equivalent. Controlling light is vital to achieving a professional 'look' with video, whether you're shepherding natural and 'found' light, or setting up a vast array of bulbs. This article aims to help you start achieving that control.

Since we all want to get 'hands on' as soon as we can, I've covered basic techniques first. After this you'll find a description of some of the types of lights and lighting accessories available, as well as their practical benefits and drawbacks.

Lighting has three key roles in video: to help you to achieve correct exposure in your camera; to heighten mood; and to enhance the sense of three‑dimensional space in the two‑dimensional image (even with stereoscopic 3D shooting). 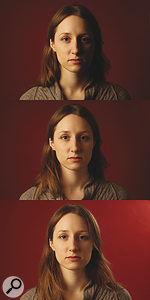 These three images show three‑point lighting being built up. The top shot shows the key light, while in the middle one the 'fill' has been added. The third adds a rim‑light, separating the subject from the background.The three‑point technique involves using three light sources to create a sense of depth and a balanced exposure. If you're in a studio environment, start from darkness and build up your scene.

1. The first light is known as the 'key' light, and is often shone from 45 degrees to one side of the shot, in front of the subject, and looking down upon them a little. Use this light to set an even exposure of the face using your camera's controls. You'll notice that the shadows are quite strong on the other side of the subject's face. For many purposes, this will be a little too dramatic, which is where the 'fill' light comes in...

2. The fill is used to lighten some of the shadows on the opposite side of the face to the key, and can be another light source or a reflector throwing some of the key light onto the subject. In general, the fill light will be weaker than the key, and using too much fill will 'flatten' the subject, removing depth.

3. The third light is the back light, rim light or 'kicker', and serves to lift the subject off of the background by creating a subtle glowing edge around them. This light is easily overdone: the intention is just to add a little more depth to the scene.

If you find (as is likely) that bare bulbs make your lighting too harsh, you can use a 'softbox' around the light, or a 'scrim' in front of it. A scrim can just be a simple piece of fabric, or other material that will diffuse the light, while a softbox is generally a four‑sided pyramid lined with silver material and capped with a scrim. Softboxes have the advantage of stopping light from spilling across your set, but are a little more fiddly to work with. Barn doors — metal flaps that can be angled to direct the light source — can also hold filters.

Once you've experimented with three‑point lighting, start breaking the rules! Remove the fill for a dramatic look, light from below to create a sense of foreboding, even try flat lighting and compare it to a more three‑dimensional style. Try out 'high key' lighting, where the scene is very strongly lit by the key and fill, or attempt 'low key' lighting, where only a key and minimal fill are used, for added drama. It won't be long before you're confident about positioning your lights and pulling your subjects out of the darkness.

The Power of Nature 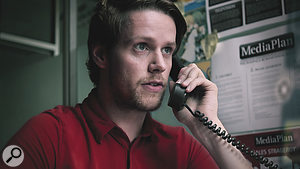 The light in this shot is provided by a single, small window. The internal glass walls were allowing too much light to hit the near side of the subject's face, reducing the drama of the scene, so we covered the entire wall in black sugar-paper!Many scenes take place outdoors, or indoors near windows, and in such situations you'll want to make use of natural light. Sometimes lighting can be as simple as placing the subject and camera to create a natural sense of depth.

Once again, a reflector can be really useful. Fighting the sun is a task for a madman, so working with it is your best bet outdoors. Take advantage of natural and architectural shade, and rig up sheets and other such items to guide the sunlight. Compared to setting up and powering large arrays of lamps, sheets of reflective or dark material can be cheap and surprisingly convenient.

To use natural light indoors, start by finding a window as a key light for your subject, and use a purpose-made reflector or something improvised, like a white sheet, as a subtle fill. You can add artificial light to a scene that's lit with daylight, but you'll have to think about colour temperature (see the 'Colour Temperature' box).

If you don't have a stand for a reflector (or even your lights), get a friend to help. The affectionate term for holding a reflector, or otherwise performing the function of a stand, is to 'Hollywood'. Adds a little glamour to the role, don't you think?

So what do you do if you have nothing but yourself, your camera and an actor? Some of my favourite shots have been lit using just a window, and enhanced using grading software. The example above is lit by a single window, while the room is surrounded by glass dividing walls that were letting in a lot of light. I had scouted the location ahead of time, and rather than adding more artificial light to create the effect I wanted, I headed to a local art supply shop to buy 30 sheets of black sugar‑paper and some Blu-Tack. After about two hours of blacking out the whole glass wall behind the camera, we had our scene!

Lighting can also be used in unorthodox ways to bring different emotions or points of interest to a scene. Certain types of video camera are great in low‑light situations, meaning that even a candle can be useful as lighting. Video-capable still cameras and DSLRs, often equipped with large sensors and fast‑aperture lenses, are a good example of this.

If you're shooting with a shallow depth of field (in‑focus subject, out‑of‑focus background), you can create depth with 'point' light sources — such as fairy lights or a desk lamp — in the background. Though the lights are likely to over-expose, the fact that they're out of focus will make them look quite soft and pleasing to the eye.

As an interesting side note, digital cameras still don't really capture the same level of detail as some 35mm film stocks when it comes to handling highlights. Check out Zacuto's Emmy-winning 'Great Camera Shootout' at www.zacuto.com/shootout for examples of the differences.

Just as one type of mic might not be right for every vocalist, or one type of lens for every shot, you're unlikely to find one light that's perfect for every scene, so knowing the types available can help you in planning ahead and thinking on your feet. Whatever type you're using, stay safe on location or in the studio. Keep cables safely taped down, and call out 'striking' or something similar when turning on a light, so that you don't hurt anyone's eyes by accident.

Since lighting a scene can be an expensive business, I've arranged the types of lighting in terms of relative cost, from least to most expensive. As with every creative discipline, you can buy budget and luxury versions of each type (and could write a book about them all too), but this should be enough information to get started with. 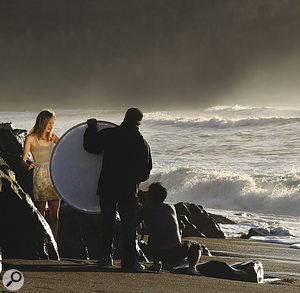 Reflectors are great for controlling sunlight. Here, a gold surface is being used to light the model, for a flattering, warm look.Since sunlight is (for now at least) free, as is any lighting already present at your location, a simple reflector can be your best friend. A reflector is usually a disc of around a metre in diameter, which folds neatly into a much smaller zip case. Its surfaces will be white, translucent, silver, gold or black, with each colour affecting how light is transferred (or otherwise) onto the subject. Some cunning reflectors have a zip around the edge, so you can use one of all five colours in a single reflector. Pretty handy! Aluminium foil and black aluminium foil (or 'black wrap') is very useful for controlling both artificial and natural light too. You can pick up a basic reflector for as little as £15$20.

Cons: Reliant on other light sources